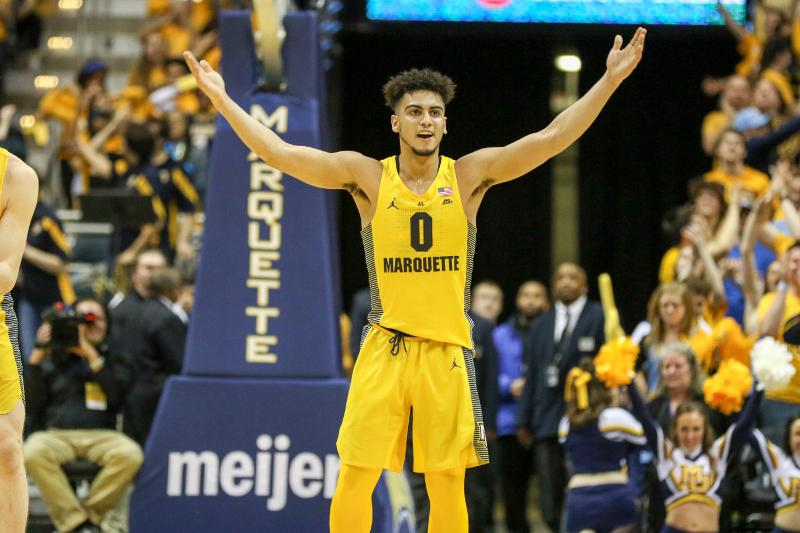 Men’s basketball had another tune-up Thursday before scrimmaging University of Wisconsin-Milwaukee Sunday. Here are three takeaways from the season ticket–holder practice at the Bradley Center:

Defense takes priority
Defense was a big point of emphasis last night, which is as expected for a team that finished last year 165th in adjusted defensive efficiency, per KenPom. With head coach Steve Wojciechowski miked up, explaining tactics to the crowd, the staff harped on defensive stance. Too many players were in an upright position instead of down low.

“In order to be a good defensive team, it starts with your stance,” associate head coach Stan Johnson said. “If you don’t have a great stance, you can’t play defense.”

The team also focused on stopping the pick–and–roll, an area where the Golden Eagles especially struggled last year.

“You’re going to guard multiple pick-and-rolls every possession, and that has to be something we’re really good at,” Johnson said. “We’ve made strides there; we’re nowhere where we need to be yet.”
Ankle scare for sophomore star
Men’s basketball fans had their hearts skip a beat when sophomore point guard Markus Howard went down with an apparent ankle injury. He headed to the locker room but returned for the end of practice.

“It’s just a little stiff, so I’m going to check with (athletic trainer) Brandon Yoder to see what’s going on with it,” Howard said. “I should be alright.”

As Howard switched on a pick with Sam Hauser, he came across forward Harry Froling, who drove to the paint with a spin move and stepped on Howard’s foot, causing him to twist his ankle. This is not Howard’s first run-in with an ankle injury.

“I’ve been known to have really, really fragile ankles,” Howard said. “So I definitely just (need to) be careful and continue to tape my ankles.”

During practice, Markus Howard (@markushoward11) tweaked his knee, but says it's nothing to worry about. #mubb pic.twitter.com/kYeHgmkE3M

Communication miscues
Playing in the BMO Harris Bradley Center in front of a crowd for the first time caused some communication hiccups Thursday, especially for the four freshmen.

“Any time you get in front of people, there’s a different reaction,” Johnson said. “We need to have a few test runs before we really get going.”

At one point, freshmanIke Eke was wide open underneath the basket, but nobody realized it. In another instance, fellow freshman Jamal Cain appeared to be oblivious to Johnson yelling instructions from the sideline.

“Good teams communicate,” Johnson said. “That’s a habit, and right now, it’s not habitual for us.”

“We had to communicate and be committed on the court,” Howard said. “It’s been things we’ve been trying to work on throughout practices and stuff like that. We’ve been getting better at it, but it just wasn’t working today.”

Marquette will get a chance to have a better showing on Sunday when they square off against University of Wisconsin-Milwaukee in an exhibition Sunday afternoon at the Al McGuire Center. Tip off is scheduled for four p.m. All proceeds will be donated to the Red Cross for hurricane relief efforts.