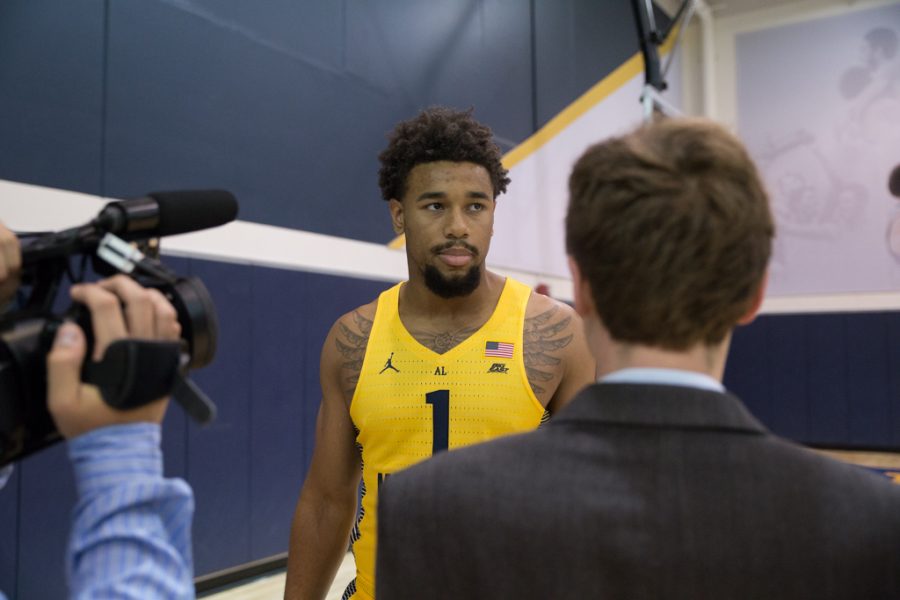 Sophomore transfer Ed Morrow sports the largest tattoo on the team, a set of wings directly over his chest.

Officially listed at 5-foot-11, Andrew Rowsey is one of the shortest players on this year’s men’s basketball roster. At the other end of the spectrum is freshman Ike Eke; he’s a 6-foot-9 with a massive wingspan.

The one physical trait that ties both players together? Tattoos.

“I do think being an athlete makes us more likely to get tattoos,” Anim said. “It’s a great way for us to express ourselves, especially as basketball players when everyone can see them on the court.”

Anim arrived on campus two years ago, without a single tattoo. During that summer, some of the older guys, led by tattoo advocate Duane Wilson, went on a trip to a local tattoo shop. Anim, eager to fit in with the more senior teammates, leaped at the opportunity.

Now, Anim practically serves as the captain of the All-Tattoo Team, pacing the squad with seven of them.

“This one is my favorite, I think,” Anim said, while pointing to his well-manicured half-sleeve art. “It’s a half-pharaoh, half-lion. To me, it just means leadership and trying to be a king. I strive to be great everyday, and it’s a great reminder.”

Of the rest of the squad, Morrow’s giant wings painted across his chest are the most noticeable and Rowsey’s minuscule homage to his parents’ anniversary is the most subtle. Eke sports the same tribal tattoo as nearly his entire family in Lagos, Nigeria, a reminder of where he came from.

John’s tattoo is divinely inspired. he has Jesus Christ on the cross across his forearm, with his extended arm bleeding directly into John’s hand. It’s a neat illusion, one that John said symbolizes everything that is important to him.

“It just reminds me that everything I do is through and for (Christ),” John said. “(Tattoos) are kind of like how people dress. Having something permanent is cool, though. It’s permanent. You can’t take it off; it kind of represents who you are and what you stand for.”

The freshman forward also boldly claimed he had the best ink on the team. Junior forward Matt Heldt declined to say who had the best, but readily came forward with his opinion about the worst.

“I think Sacar has the worst one,” Heldt said, with an eager grin sneaking across his face. “I Google imaged how I describe his tattoos, and I’ll find the exact same one (on the internet). I do not think he’s the first person to get those tattoos.”

Heldt gave his respect to Eke and Morrow and mentioned he didn’t think he could pull one off himself.

Junior wing Haanif Cheatam rides for Morrow as well, while phenom point guard Markus Howard puts his money on John’s, although Howard said that if he ever got one, it would undoubtedly be the best on the team.

There seems to be only one person within Marquette basketball that doesn’t have an opinion on tattoos, and that’s head coach Steve Wojciechowski. Ink-free himself, Wojo he would never begrudge anyone who sports a tattoo, he just doesn’t think he’d look very good with one himself.

“Can you give me a day?” Wojo said when asked about who had the best ink. “I guess it’s a little weird for me to ask guys to take their shirts off so I can study their tattoos. Though, I’ve heard they’re like potato chips, once you get one you just can’t stop.”