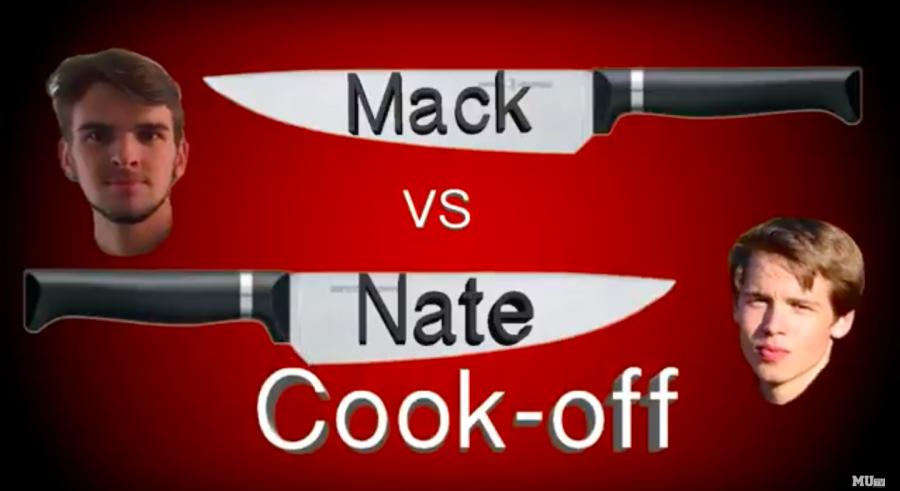 The Sodexo run dining halls tend to get mixed reviews from students. But there are quite a few Marquette-favorites such as Straz’s stir-fry, Schroeder’s chicken parmesan and, of course, hot cookies. However these recipes are not restricted to those with meal swipes. Assistant A&E editors, Nathan DeSutter and Mackane Vogel not only sought out to prove this, but wanted to see who could do it better.

Going into the cook-off, I knew I’d have a bit of an advantage. I was making my own marinara sauce in round two and my cookie dough in round three. If I executed them well, they could easily surpass Mackane Vogel’s store-bought ingredients.

However, round one was a bit of a challenge. Our goal was to replicate Straz Tower’s stir-fry, but I’d never even eaten at Straz. Vogel, on the other hand, eats there 2-3 times per week, so I knew that he had the upper hand.

Earlier that day, I tried Straz’s stir-fry for the first time, so I kind of knew what I was aiming for, but during the cooking process, I made a fatal flaw. I added a bit too much Teriyaki sauce which made the dish liquidy. Vogel’s stir-fry was the perfect texture, which became the deciding factor.

My recipes for this entire cooking challenge were simple. They were all last minute, and none of them were specific. I was deciding on the ingredients on the fly.

First was the stir-fry. I am somewhat of a stir fry connoisseur now, being that I eat at Straz Tower at least two to three times a week. I always get the peanut sauce.  Since DeSutter and I used all of the same ingredients, I knew that my sauce would have to be my secret weapon.

I went with a peanut sauce that was constructed of peanut butter, soy sauce, ginger, garlic, worcestershire sauce and a hint of lime juice. My sauce proved to be better than DeSutter’s far too liquidy Teriyaki sauce, and won me the first round.

I was back into my comfort zone for round two. I love cooking Italian food, and I’ve made my own marinara sauce countless times. I chopped up some fresh carrots, celery, onions and garlic with some crushed tomatoes and let it simmer for about 90 minutes.

The main challenge of this dish was frying chicken. The last time I tried to fry something in my apartment, my mozzarella sticks instantly turned black, and the apartment started to smoke. But, I made sure to buy a thermometer. The chicken turned out perfectly and I won round two without a sweat.

I had to somehow beat DeSutter’s homemade marinara with a store-bought red sauce.

This was a tall task, especially considering how much texture I saw in DeSutter’s sauce, and how mine looked like pure liquid. I did the only thing I could think to do, which was to add something very distinct to my sauce: balsamic vinaigrette. In high school, there was an Italian woman who was a coworker of my mom that stayed at my house for about a month. During this time, she cooked with us frequently, and she told us that in Italy, everyone puts balsamic in their pasta, even with the marinara sauce. So I grabbed some balsamic vinegar and some olive oil from DeSutter’s pantry and I worked some magic.

The judges loved this touch, despite DeSutter’s victory.

We were deadlocked 1-1 going into round three. This was a challenge for both of us because we had no idea how to craft Cobeen Hall’s signature hot cookie. We each shoved our cookie doughs — his store-bought and mine homemade — into a shallow bowl, popped them into the oven and hoped for the best.

We both kept opening the oven and poking our cookies to try and achieve the perfect hot cookie texture of crispy on the outside and gooey in the middle. It was an excruciating process, but after 12 minutes, my cookie was perfect. Vogel’s, on the other hand, was soupy in the middle and it ended up being his demise.

Overall, this proved to be a tough competition, but I gained a lot of respect for Vogel in the kitchen. His ability to be innovative with his sauces and introduce flavors that wowed both the judges and myself was extremely impressive. However, the most important takeaway from the night, I moved to 2-0 in Mackane vs. Nathan challenges.

Last but not least, came the hot cookie. There was really no recipe here at all on my part. Once again, DeSutter made his own cookie dough and I worked with Pillsbury, pre-made dough. I love Pillsbury as much as the next guy but homemade cookie dough is always gonna taste fresher. This proved to be my demise, as I came up just short of victory in this final challenge.

I gotta say, I feel DeSutter had the advantage in being able to prepare all this homemade stuff since, after all, it was his apartment. I was out of my element, but I think I did a good job using the resources that were available to me.

We cooked for five long hours and I lost. I will most certainly be seeking revenge in our next challenge: pumpkin carving.