Volleyball midseason review: The best team of the Theis era? 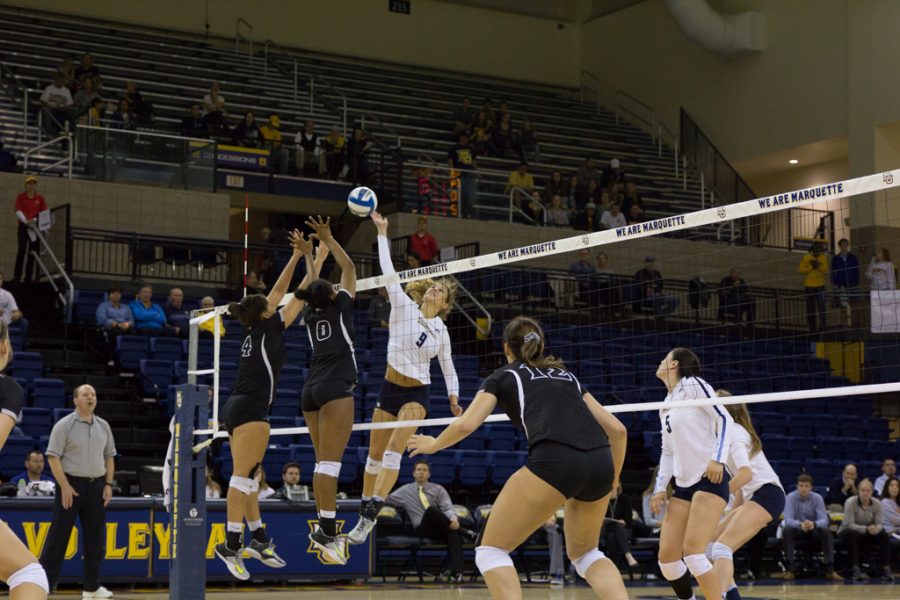 It would have been tough to find anyone, even the most optimistic Marquette volleyball fan, that could have predicted this.

Just under a year removed from losing almost every significant starter from last season, the Golden Eagles (13-5 overall) haven’t taken a single step backward. Instead, they’ve reeled off an eight-match winning streak, including the first seven matches of conference play. The cherry on top was a straight-sets victory over the then-No. 12 Creighton Blue Jays, the program’s first since 2013.

Any discussion of Marquette volleyball’s season has to start with sophomore outside hitter Allie Barber, who is having a historic season. Her 4.87 kills per set is tops in the BIG EAST by a wide margin; there’s as much distance between her and second-place hitter Julia Cast of St. John’s as there is between Cast and the hitter in 10th place. Barber also sports a .372 hitting percentage, good for third in the conference.

Barber’s 21-kill performance against Creighton last Thursday made her the BIG EAST offensive player of the week for the second straight week and the fourth time this season. Her high-rising crosscourt attacks from the left pin have been Marquette’s go-to option on offense. So far, opponents have given them no reason to deviate from it.

Of course, it helps to have a steady setter delivering those balls to Barber, and that’s exactly what fellow sophomore Lauren Speckman has been. She has started all but one match and ranks second in the nation in assists per set at 12.30, trailing only Florida Atlantic’s Ivone Martinez. Along the way, Speckman posted two of the top five single-game assist performances in the conference.

Freshman libero Martha Konovodoff matches Barber and Speckman’s impact on the defensive end of the floor. Head coach Ryan Theis singled her out as the most accurate passer on the team and she has not disappointed, consistently putting Speckman in good position to set. Her 4.17 digs per set rank third in the BIG EAST and first among conference newcomers. It seems likely that she will get a nod to the BIG EAST all-freshman team at the end of the season.

The Golden Eagles are now resting on the first-place perch that everybody thought would be Creighton’s. Marquette is up a match-and-a-half on the Blue Jays with 11 fixtures left until the BIG EAST Tournament. While Theis and the players have stressed the importance of every match, it’s no secret that they’re all looking forward to Nov. 4: the date of the rematch with Creighton in Omaha, Nebraska.

Beating Creighton a second time would do more than just make Marquette the odds-on favorite to win the conference. It would also solidify the Golden Eagles’ NCAA Tournament spot. According to the NCAA’s RPI rankings, Marquette is No. 32 in the country, which would be the best final ranking Marquette has had since 2013 if the season ended today. However, Marquette’s victory over Creighton is its sole top 50 win, and the Blue Jays are the only remaining top 50 team on the schedule.

Theis’ team will close out the front half of its conference schedule with road matches against Villanova and Georgetown this weekend on Saturday and Sunday, respectively. Six of Marquette’s next eight matches will be away.