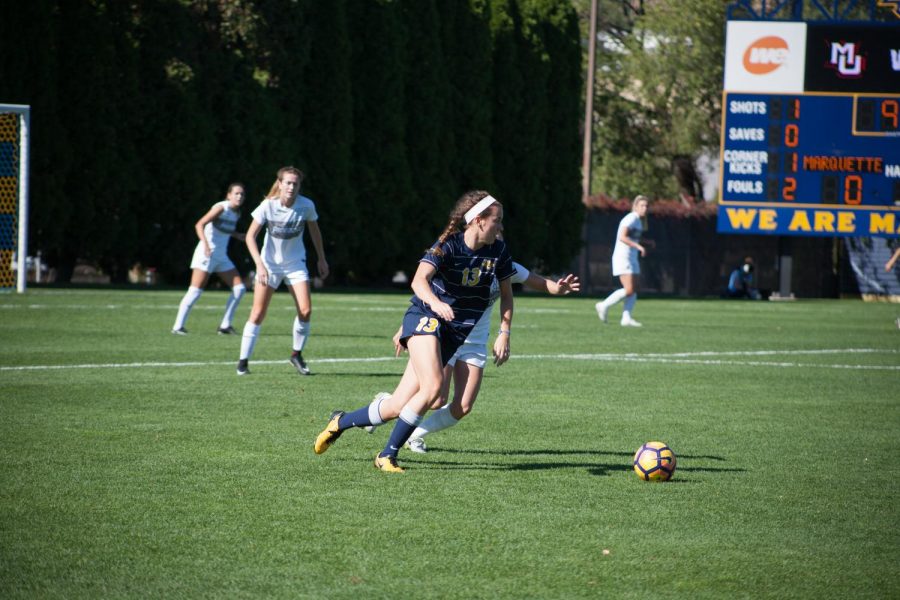 At this time last month, the forecast for the women’s soccer team was all sunshine and blue skies. Markus Roeders’ eighth NCAA Tournament appearance in a 10-year span seemed all but certain with a 7-1 record and three consecutive road victories.

Things have certainly changed since then. What at first appeared to be a rough weekend – a tie at home against Illinois State and a road loss to crosstown rival University of Wisconsin-Milwaukee – morphed into a rough month.

Between Sept. 11 and Oct. 11, the team went 2-4-1. Opponents outscored the Golden Eagles 10-5, a stark contrast from the team’s 10-1 goal advantage in its seven-game winning streak.

The team’s precipitous fall coincided with redshirt junior Carrie Madden’s nagging quad injury. The injury, which was initially expected to be day-to-day, quickly became much larger. It kept the BIG EAST All-Preseason Team honoree off the pitch entirely for four matches and out of the starting lineup for six consecutive matches.

Much of the Golden Eagles’ fortunes from here on out will come down to which form of Carrie Madden shows up. She teased what may be ahead against DePaul Oct. 5, scoring a brace for the first time this season.

However, she hasn’t always played up to that standard in recent games. Against Providence, when Marquette was desperate for any offense, Madden came up empty. She did not even have an attempt in the 1-0 loss.

Going into the season, Marquette knew there would be a transition period in the back line. Several underclassmen – Bri Jaeger, Mary Kate Simon, Emily Hess and Maddie Monticello – have received at least two starts this season.

The team’s loss to Villanova, which head coach Markus Roeders described as one of the worst in program history, epitomized the team’s struggles. With senior Madison Dunker as the only defender to have played serious minutes before, the back line struggled to clear the ball out of its third. As a result, goalkeeper Maddy Henry was often a sitting duck against Villanova, finishing the match without a save for the first time in her career.

Roeders made a key adjustment after that game, moving midfielder Caroline Fink into a more defensive role. As a result, fellow midfielder and senior Eli Beard had more room to roam offensively.

The change has led to mixed results. It helped goalkeeper Maddy Henry walk away from the St. John’s and DePaul victories with clean sheets, but defensive miscues still leave Marquette vulnerable, as the Providence match demonstrated.

With only four matches left in BIG EAST play and a conference tournament berth in jeopardy, Marquette will have to get positive results against conference heavyweights Xavier and Georgetown in its next two tilts. Otherwise, any efforts in the final two matches will likely be in vain.