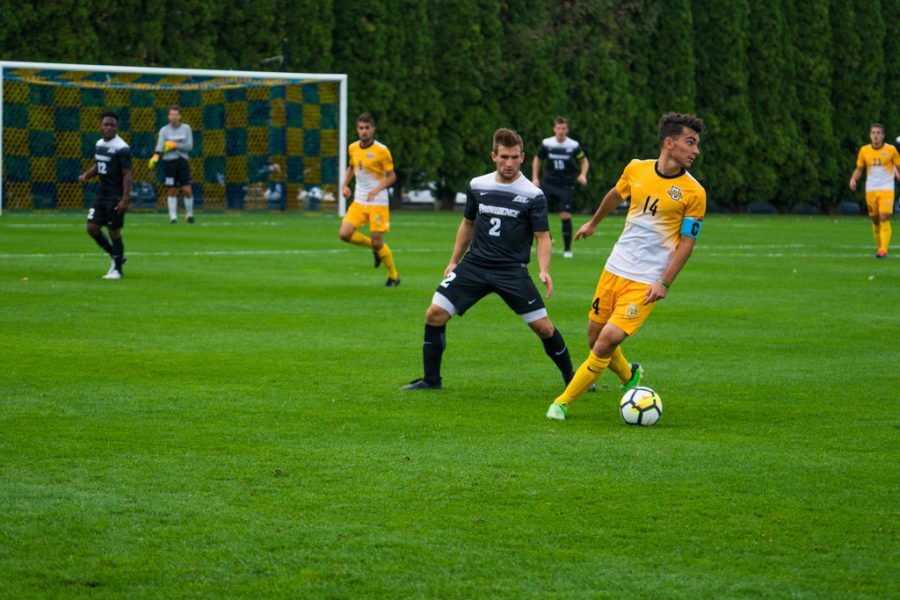 It’s as dark of a time for Marquette men’s soccer as the program has ever experienced.

After a brutal non-conference schedule, in which the Golden Eagles failed to win a game, going 0-6-1, with their lone result coming against UIC in their home opener. Marquette had a brutal stretch, facing college soccer bluebloods, including the No.6 Virginia, No. 24 Kentucky, and in-state rivals UW-Milwaukee and Wisconsin.

It took a four goals to beat Seton Hall to earn their lone win of the season, and given the nature of their remaining schedule, the offense will have to come to life if Marquette is to sneak into the conference tournament.

The Golden Eagles are currently 1-8-2 overall and 1-2-1 in the BIG EAST, second to last in the table with 4 points and are tied with two other teams, Creighton and DePaul. However, they are just one win separates the bottom three teams to the top three, and if the Golden Eagles can get a victory this weekend in New York City, they could go up to third in the table. If that is to happen, Marquette will have to fix a few things before tomorrow.

There hasn’t been much to cheer about this season, as the back line has been exposed time and time again. Marquette has already given up 24 goals, one more than the entire 2016 season, which wasn’t exactly a banner year either. Marquette is dead last in goals-against-average with 2.18 as well.

Marquette’s offense has been better than its defense, albeit with mixed performances. Marquette has 11 goals on the season, but has also gone in stretches where the offense has practically been non existent. One major reason has been that opposing defenses have shut down Marquette’s star midfielder, Luka Prpa.

After winning BIG EAST Freshman of the Year in 2016, Luka Prpa has had the exact opposite season this year. Prpa is second in the team in minutes with 1,029 and shots with 23, but has not been able to find the back of the net as consistently as he did last season. He has only three points, including a goal and an assist.

Transfer Grant Owens has been another source of excitement in an otherwise bleak season, leading the team with six points. He has been asked to play just about everywhere on the pitch – right back, midfield and his natural forward position – and has done an excellent job of filling in wherever head coach Louis Bennett wants him to be.

Another key for the Golden Eagles has been fellow transfer Brody Kraussel, who has three assists on the year and is a genuine threat at the wing position. His ability to take on defenders one on one has been exciting to watch and Kraussel is always a threat for the offense whenever the ball is at his feet.

Perhaps Marquette would be doing better if the injury bug didn’t bite quite so often. Midfielder Martin Alba, freshman defender Manuel Cukaj and transfer Steffen Bohm have picked up knocks along the way, disrupting unit cohesion. While the defenders and holding midfielders have been out, Marquette has been particularly vulnerable, giving up plenty of goals that otherwise would have been routine clears. Missing Jason Davis for the early stretches of the season hampered his progress as well.

In theory, Marquette is still in contention to qualify for the BIG EAST Tournament; they’re only two points off the pace with five matches remaining. However, if they are to get within shouting distance, it will have to start Saturday with a difficult trip to New York City, where the third-place St. John’s Red Storm await. The Golden Eagles are 0-6 this year on the road and will not play another home match until October 25.