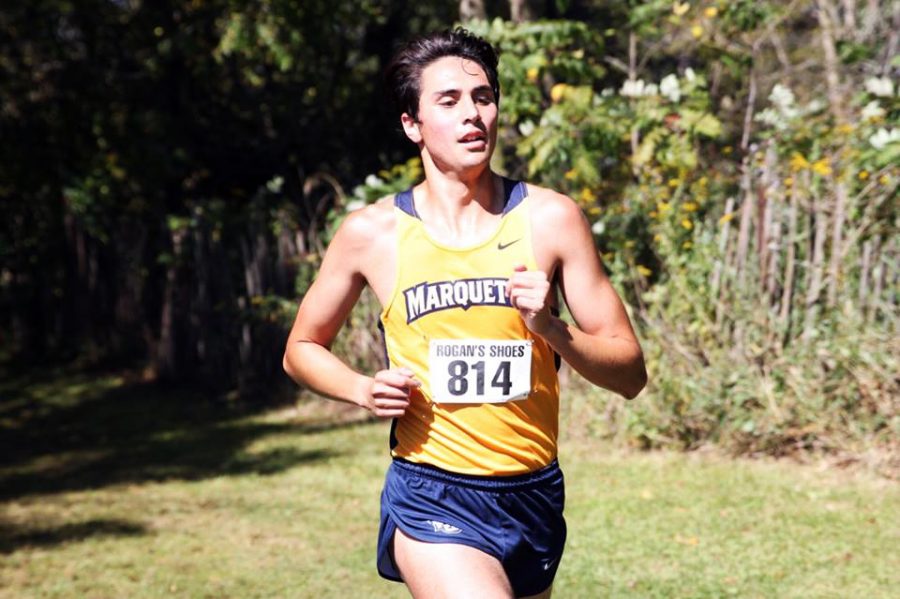 Ryan Burd has gone from not making the team as a freshman walk-on to being one of the team's best runners. (Photo courtesy of Marquette Athletics.)

Ryan Burd came to Marquette in 2015 with hopes of walking on to the cross country team. He didn’t make it, which forced him to ponder whether he would still pursue running.

“Freshman year I was basically told ‘Thanks for trying but our spots are full,’ Burd said. “At that point, I had to make a decision if running was my passion, and after a lot of thought and contemplating, I decided it was.”

Two seasons later as a redshirt sophomore, Burd is one of Marquette’s top runners. He has two top-five team finishes this season, and finished seventh place at the Flames/Flyer Challenge last month.

Burd’s running prowess was obvious from his days at Bellarmine College Prep in San Jose, California, where he was the team’s top runner and won several conference championships.

When those skills didn’t translate into good enough times to make the team, Burd redoubled his efforts, joining the club team and competing in its races. He kept in contact with cross country head coach Mike Nelson. “He was always very encouraging,” Burd said of Nelson. “I would let him know my times and he would always respond with positive words.”

The achievements of his teammates from high school also influenced Burd to keep pursuing running.

“A lot of my friends from high school run for their respective colleges,” Burd said. “Seeing them succeed really spurred me to continue to be a part of that legacy”

After a year of training, Burd improved his times enough to walk on last year. He treated his freshman year as a redshirt season so that he would still have four years of eligibility.

In his first collegiate season, Burd was one of the team’s most consistent runners, finishing among the top seven for Marquette in every one of his races. One of the highlights of the year was a top-50 finish at the BIG EAST Championships, the sixth best mark of any Marquette runner.

While having an impressive redshirt freshman campaign was a nice boost for Burd, just being a member of the team meant a lot to him.

Burd has eyes set on even loftier goals for the future. He says a sub-25-minute 8K run is in his near future, which would have placed him in the top 10 at last year’s BIG EAST Championships.

“It has been such a journey,” Burd said. “It’s hard to believe that things worked out this way, but I am very pleased that they did.”

Nelson watched Burd’s development with admiration for how far the young runner has come since not making the team as a walk-on.

“It’s a testament to his work ethic,” Nelson said. “It goes to show how much you can improve if you simply put in the hard work.”