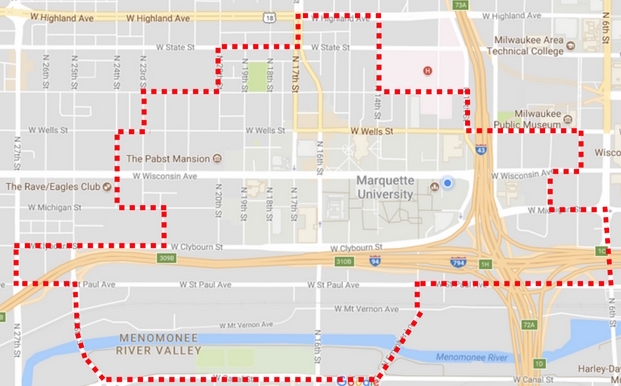 “What we found in the first couple of years here is that we have properties that are south, which would be Valley Fields, and we’ve obtained some property to the East by Straz,” MUPD Captain Jeff Kranz said. “Our patrol zone and (the) state law gives us the ability to flex as the campus grows or shrinks, or whatever the case is, so we have the ability to move our area to best cover property owned by Marquette.”

The expansion will not have any extra costs, such as time and money, but may require more resources because it is a bigger area, Kranz said.

“We were in those areas going (by) Marquette properties to begin with. This gives us some jurisdiction if we see something happen while we’re traveling from our main patrol zone to Valley Fields, like a car accident or a drunk driver,” Kranz said. “Now our officers can take action within our jurisdiction instead of making a stop and having to call the Milwaukee Police Department to come take care of it.”

LIMO routes will not be changing because of the expansion as they already cover the area west of 22nd Street.

“I would say nearly any area that students live in is already covered, even off-campus, and that’s the priority. We get a lot of calls from 22nd and Michigan from the row of houses there; it can be a pretty sketchy area,” said Grace Connatser, a LIMO driver, trainer and sophomore in the College of Arts & Sciences.

Connatser said there are some apartment complexes such as Clybourn Place and Celeste, at 20th and Clybourn that house students who often call for LIMOs.

“MUPD usually takes good care of this area, and all LIMO drivers also have the responsibility of keeping an eye out for suspicious activity whenever we’re down there,” Connatser said.

The LIMO drivers only go to Valley Fields on Canal, and they are not allowed to pick up from anywhere but Valley.

Meredith Lowry, a junior in the College of Arts & Sciences, frequently visits her boyfriend around the 22nd Street area by Clybourn and Canal and has not seen any unusual activity recently.

“I’ve had some weird encounters at the gas station on 26th and Clybourn where people have come up to me and asked me to buy their gas for them or said things to me that made me feel uncomfortable, but I think that can happen anywhere,” Lowry said.

Lowry said that while that area is generally pretty quiet, it’s not all students that live there. She said she thinks MUPD could expand even further to western and eastern areas.

“There are students that live further that way on State Street and Highland Avenue too that could benefit from MUPD’s presence,” Lowry said.