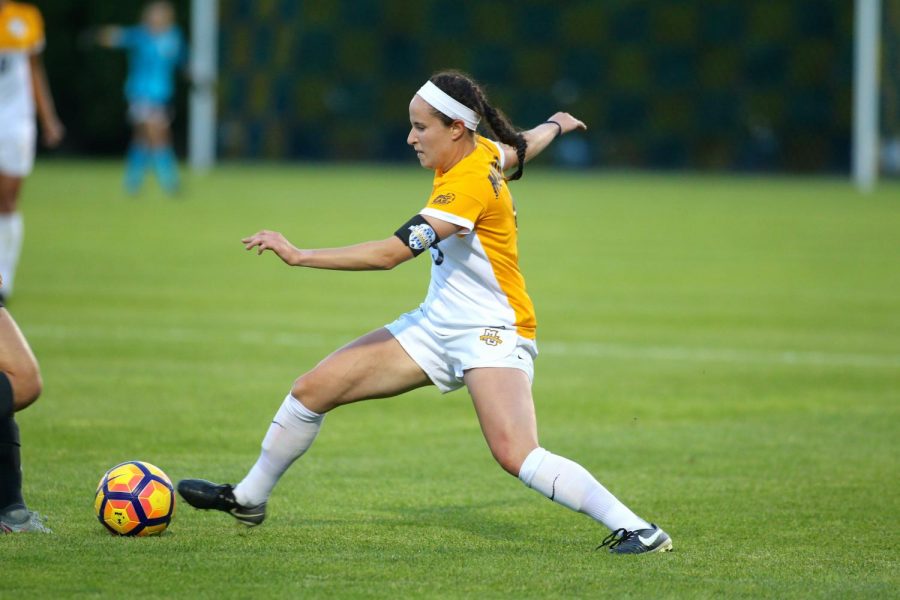 Marquette head coach Markus Roeders knew Providence would not be a cakewalk despite owning a 12-0-2 series advantage entering play. The Friars’ defense has stifled opponents so far in BIG EAST play, averaging only one goal allowed per match entering the weekend.

Sunday afternoon, Marquette joined the list of teams to be flustered by the Friars’ back four, losing 1-0.

The lone goal came in the 17th minute when a well-placed cross from midfielder Theresa Durkee set up a perfect opportunity for forward Amber Birchwell. With only goalkeeper Maddy Henry to beat, Birchwell rolled one past the keeper and into the net.

“Emily Hess at that point turned the ball over for the third time within a 10-minute spell trying to beat somebody and running into a second player,” head coach Markus Roeders said. “From there you have the turnover, Maddie Monticello gets pulled out a little bit … It’s a quick bang-bang play and all of a sudden we’re chasing her.”

Once Providence captured the lead, they parked the bus in the defending third. While Marquette found some open space on the flanks of the Providence defense, the team could not center or finish its opportunities.

“We’re so dangerous on the outsides, but we need to execute our crosses a little better,” graduate senior forward Darian Powell said. “Pull them out from the goalie because their goalie likes to pick those off.”

Powell had a promising chance in the last few minutes, but a collision and controversial no-call made it a moot point.

“Honestly it was a blur,” Powell said. “I was just trying to get to the ball and then I got shoved and ended up on the ground.”

“Those are the situations you have to create,” Roeders said. “And if you don’t get the call on the first one, you have to say, ‘Well, make it happen on the second one or the third one.’”

With the loss, the Golden Eagles have their backs against the wall. Through five BIG EAST matches, they have six points, only half of their 12-point total last season.

“We can’t dwell on it,” Powell said. “We’re running out of games, so we have to come up with a result sooner or later.”

To make things even more challenging, Marquette’s next two matches are against Xavier at home and Georgetown on the road. The Musketeers and Hoyas are a combined 7-0-3 so far this year.

“Must win … you could’ve said that about today,” Roeders said. “We have to win for us to do something postseason.”

A top-six finish in the BIG EAST regular season standings is required for a tournament berth. The loss moves Roeders’ squad to a tie with Villanova for fifth. The Wildcats would have the tiebreaker after defeating Marquette, 4-1, earlier in the year.

“We’re going to do a lot of executing in the final third, do some finishing,” Powell said. “It’s what we need to do to win.”