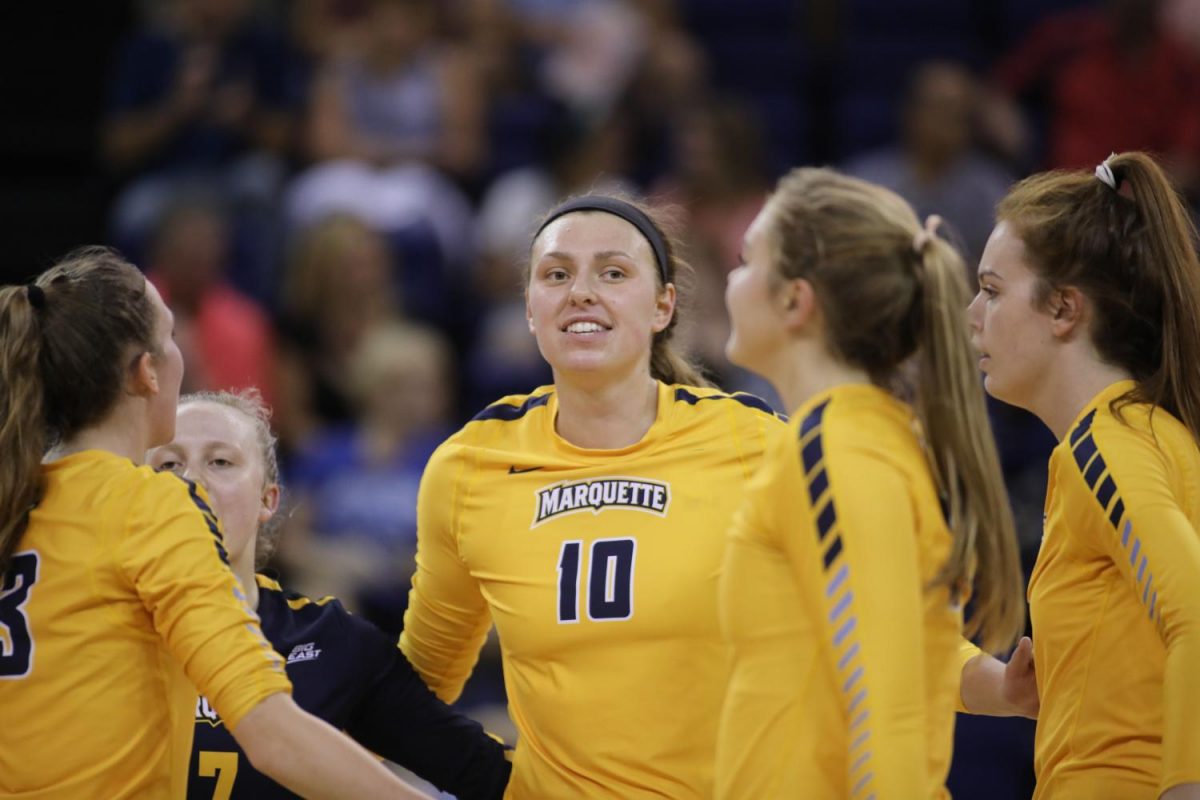 Marquette volleyball upset No. 12 Creighton 3-0 (25-16, 25-15, 25-21), who was previously undefeated in conference play, for the first time since 2013. It was also the first time in program history Marquette has beaten two ranked opponents in the same season.

“I am so incredibly proud of Coach Theis and the girls he has brought in,” senior Jenna Rosenthal said. “It’s such a huge win for the program because we haven’t done this since 2013, this was before my time. I remember coming and hearing about Marquette beating Creighton to win the BIG EAST Championship and to be able to do this now on our home court in such convincing fashion is really a testament to the new program we have built.”

The Golden Eagles’ success began on the defensive end, as they did an excellent job of getting quality digs, keeping the ball in play and protecting the net. Creighton outside hitter Jaali Winters, who led the team in kills per set coming into the night, finished the match with just eight kills and hit only .067 percent.

“(Winters) is one of the best players in the league and probably one of the best in the country in terms of all-around players,” said Marquette head coach Ryan Theis. “A lot of people take the strategy of wearing her down and trying to make her play a lot of balls because she does a lot for them. She has gotten the better of us over the years and tonight we were able to put a lot of pressure on her.”

Anna Haak led the way on defense with 19 kills. Libero Martha Konovodoff added 11 digs of her own, some on hard, unchallenged Creighton hits.

On offense, Allie Barber led the way as usual, hitting 21 kills with only one error.

“I love having Lauren (Speckman) as a setter,” Barber said. “Having her come back in (from the bench) was awesome.”

In the first set, Creighton and Marquette started out neck and neck, but the Golden Eagles were able to break away and give themselves a 14-11 lead, forcing Creighton to call timeout. Following the timeout, Marquette extended their lead to 19-14, Creighton called for another stoppage in play, but it did little good, as Marquette would go on to take the set 25-16.

Marquette used the momentum they built up in the first set to come out strong in the second. The Golden Eagles opened the frame with a 7-2 lead. Coming out of a Creighton timeout, Marquette went on a 4-1 run to build their lead up to 12-3. Several Marquette errors allowed Creighton to climb back into the set, but the closest the score would get is 15-9. The Golden Eagles took it 25-19.

In the third set, Marquette once again started off on fire gaining a 7-2 lead eliciting another Creighton timeout. The Blue Jays played Marquette much closer for the rest of the set, but after securing a 22-18 lead, the Golden Eagles were able to force a game point with a 24-19 lead. Creighton would get two quick points before Marquette secured the upset, 25-21, on a Barber kill.

The celebration will be short for the Golden Eagles. Half an hour after the final kill, they began preparation for Providence, who comes to town tomorrow at five p.m.