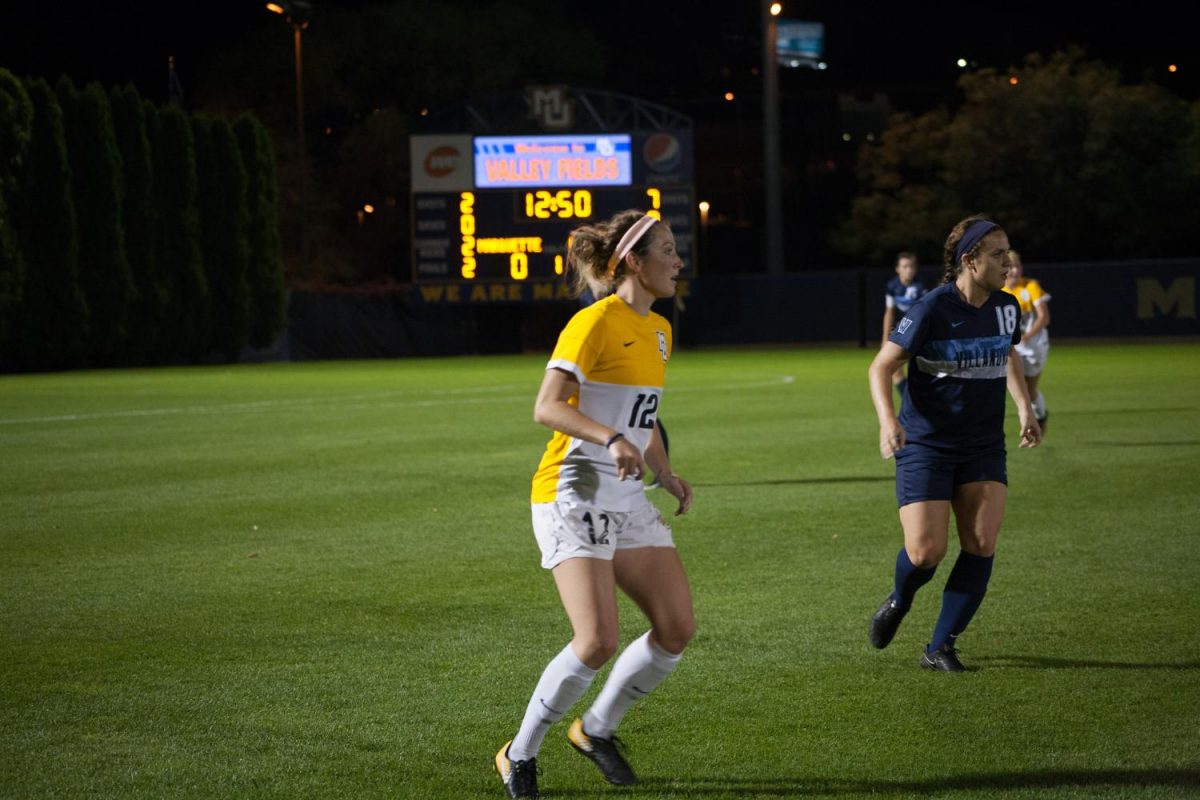 Running out of room on the left side against a stifling Boston University defense, forward and leading goal scorer Darian Powell crossed it toward the box. Waiting on the other end of that cross was Kylie Sprecher, the team’s second-leading goal scorer. After speeding past her defender, leaving only the goalkeeper to beat, Sprecher slid a shot into the net for a perfect one-touch goal.

“She had a beautiful cross, and I ran in and I thought I missed it at first, but it was cool to have that connection,” Sprecher said. “We were hugging and smiling afterward.”

At first glance, it appeared to be yet another example of head coach Markus Roeders’ family atmosphere appearing in game action. But there was one thing especially unique about the Powell-Sprecher connection last month: for the first time in program history, a player assisted a teammate that was five years younger.

Part of the reason for the new record is simple; Marquette has never had two players separated by five years on the team. The age difference came to fruition last year when Powell decided to pursue a sixth year of eligibility after being sidelined for her first two years on campus.

“I don’t really think about it that much because, I don’t know, it’s my journey,” Powell said. “I’ve been meshing well with the team. It’s not like I’m an outlier or anything, so it’s been fun.”

Meanwhile, Sprecher’s rapid development throughout the club circuit allowed the native of Menomonee Falls, Wisconsin, to earn serious minutes as a freshman.

One would expect an adjustment period for teammates born five years apart from each other. However, Powell and Sprecher don’t overcomplicate their relationship.

“It doesn’t really affect us at all,” Powell said. “We’re friends, so we’re pretty normal.”

When Sprecher is on the bench, she keeps an eye on Powell’s movement and positioning. When they are both on the field, Powell acts as a second coach, guiding the young forward to the correct spots.

“I would always watch her when I was on the sidelines before I would come in and watch what she did,” Sprecher said. “She does a really good job when I’m on the field of coaching me and helping me get in the right spots and making the right movements.”

Powell keeps her advice to Sprecher simple. “We’ve been clicking a lot, so when we’re together, we just focus on what we do well — finding each other on the field and focusing on her,” Powell said. “She’s really good on getting crosses, so I’m like, ‘Focus on your crosses, focus on your technique, do what you do well.’”

Powell and Sprecher’s comfort around each other dates back to a few summers ago when Sprecher joined Powell and senior Caroline Fink on the SC Waukesha U-23 team. There they got accustomed to each others’ styles of play, years before Sprecher first put on her No. 8 gold and white kit.

Last summer, fellow teammates Eli Beard, Allison Jacobson and Carrie Madden, among others, also spent the summer playing with SC Waukesha, giving Sprecher a chance to learn from more of her future teammates. That gave Sprecher an edge over other freshmen when she arrived on campus.

“When I got here on campus in July, I was already comfortable,” Sprecher said. “I knew people, I knew how they played. I was able to get a little bit of a feel of what the next level was going to be like.”

With junior forward Jamie Kutey and preseason All-BIG EAST team honoree Madden sidelined for portions of this season, Roeders has consistently called on Sprecher to step up. The freshman has already played 779 minutes this year, more than Powell played during her entire first year healthy.

“I definitely didn’t expect it right away but I think I’ve learned a lot,” Sprecher said. “I’ve gotten some good chances.”

The path has not always been smooth, especially recently. With the team on a losing streak, Roeders relegated Sprecher to a slightly smaller role with fewer touches.

Even in a new role, Sprecher and Powell’s on-field chemistry shows. Roeders never directly substituted Powell for Sprecher despite playing similar positions, giving them a chance to build on their relationship on the pitch. Sprecher now has to learn how to play at her own pace despite Powell also playing up top.

“That kind of just comes from experience — knowing when to slow it down, when to switch the field, (when) to calm everybody down,” Powell said. “That’s a thing a lot of people still need to learn and we need to do moving forward.”

She won’t have to look far for someone to emulate.

“It still looks like (Powell) is slowing the game down. She’s taking the touch, she’s drawing somebody in, she’s finding the outlet,” Roeders said. “That’s the difference between a 23-year-old senior and an 18-year-old freshman.”