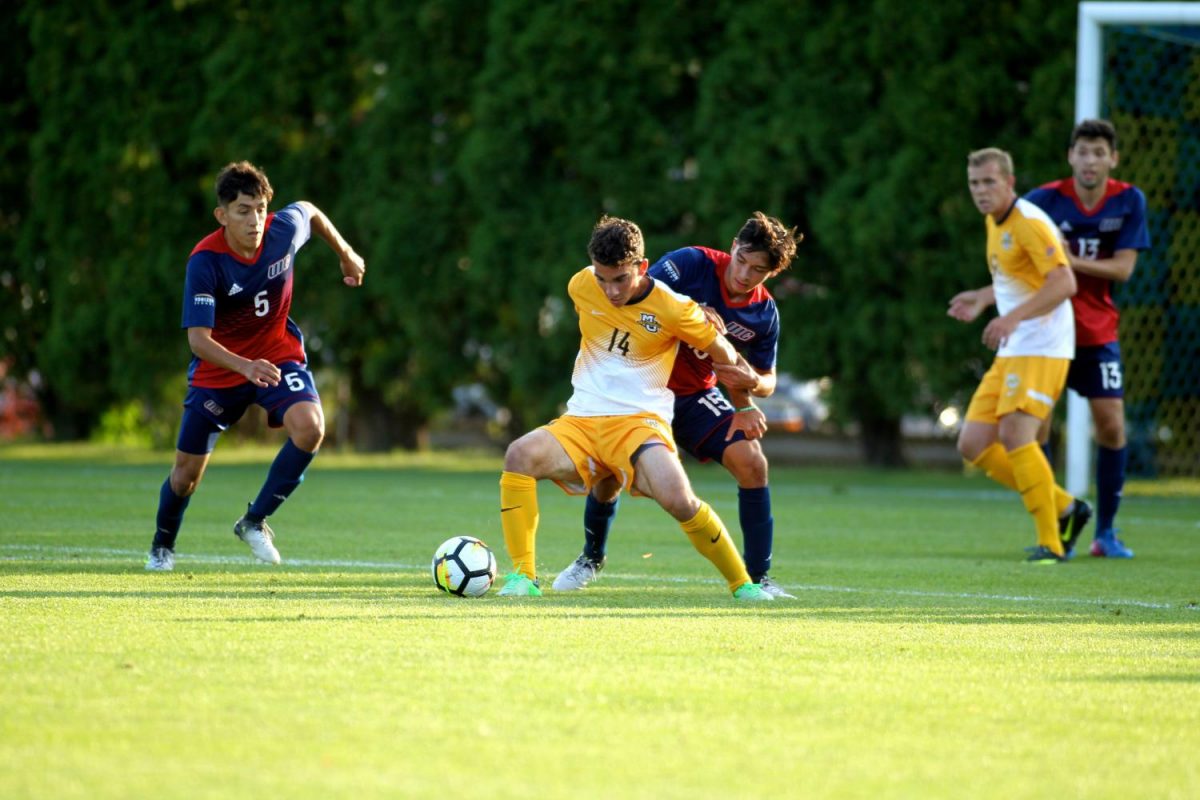 Luka Prpa has scored only one goal this season.

Sophomore midfielder Luka Prpa is not one for personal accolades, however, it’s not hard to notice the abundance he received during his freshman campaign, where he led the team in points with 26.

Prpa topped off his freshman season with a number of awards including the BIG EAST Freshman of the Year and TopDrawerSoccer’s Freshman Best XI Team. He then started off this season as the only Marquette player to be named to the Preseason All-BIG EAST team.

Heading into the season, all the pressure was on Prpa to have a big sophomore year, but so far, he has not lived up to expectations. Men’s soccer has one win to its name and Prpa has logged a single goal 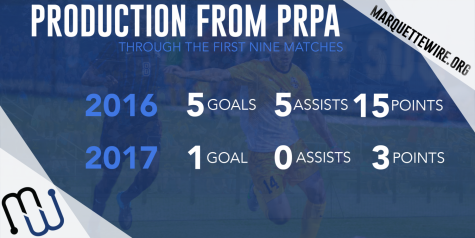 this year. Defenses have been keying in on him, watching him at all times, ensuring he doesn’t have time to dribble or make a precision pass, let alone score. With predictions, media and other coaches chiming in on his pitch performances, the only one who hasn’t been able to speak about it is Prpa himself.

“For me I’m not really frustrated, because the goals don’t really matter to me personally and it’s more about the team,” Prpa said. “While it certainly helps the team, I just want to see us get back in the win column again.”

“The team believes in me and I believe in our guys,” Prpa said. “We’re right there in every game we play, but it’s that one little moment that will turn the game in their favor instead of ours, and we need to make the most of our chances when we get them.”

“Last year, he was playing by the seat of his pants,” Bennett said. “He was doing really well and flying high, and this year, he’s had to do some grinding, and I think it’s helping him.”

Although Prpa only has one goal, he leads the team in shots with 19 shots, six more than fellow midfielder Connor Alba with 13.

While Prpa is certainly not putting up eye-popping numbers and highlight reel goals like he did last year, Bennett still believes he’s effective on the pitch.

Prpa often commands the attention of two or even three other players. In addition, Prpa has become a much stronger leader with a year of experience under his belt.

“The caliber and the quality of the football he does helps us grow quicker,” Bennett said. “His leadership is a quieter, humbler guy, but when he says something, people listen.”

At 1-7-1, the chances for an at-large postseason berth are long gone and it would take a 180 degree turn of fortune for Marquette to even make the BIG EAST Tournament. Despite the team’s abysmal and often misleading record, Prpa believes Marquette is on pace for a comeback in the long-term, if not this year.

“From those experiences with the close losses this year, we are getting sharper and sharper while putting more details into every game,” Prpa said. “I think it’s only a matter of time before you start seeing those results.

Prpa still believes that this season can be salvaged, starting with a trip to in-state rival Wisconsin on Wednesday.

“We still have the bulk of the BIG EAST schedule left and we think that because of our experiences, we definitely know that we can get the job done, we just have to go out there and do it.”