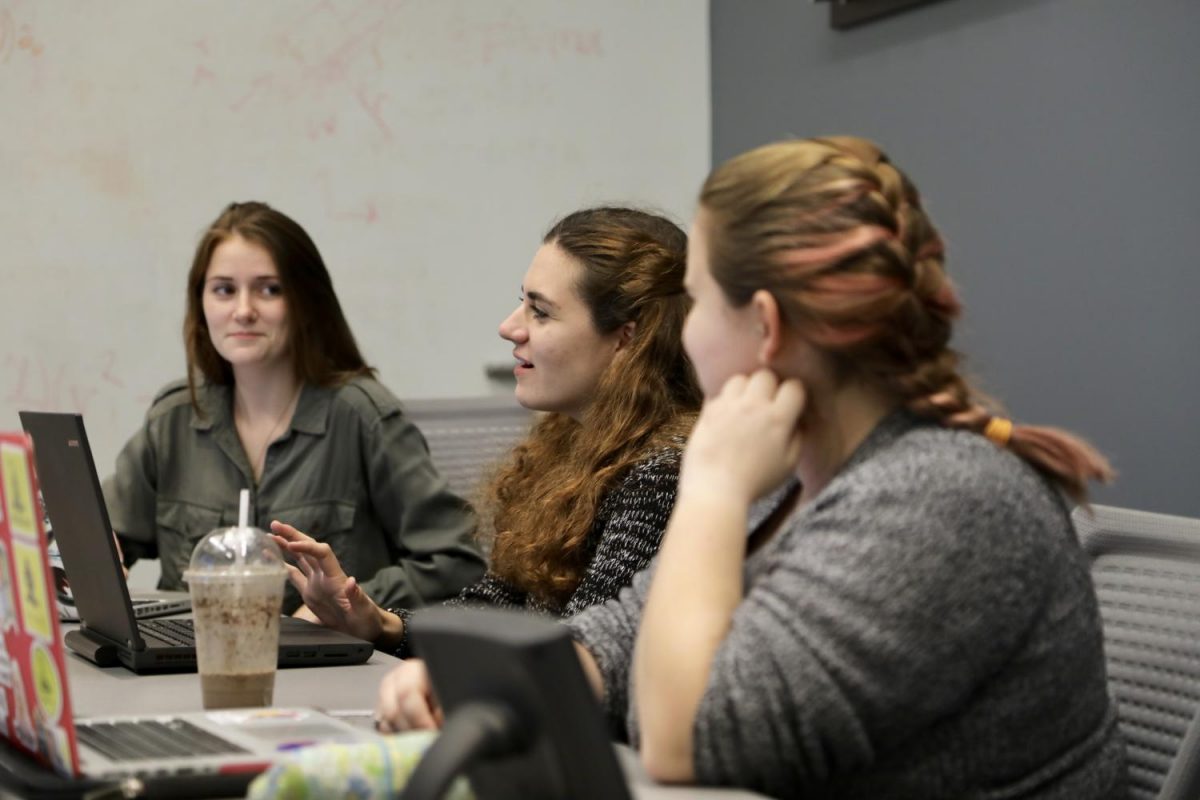 From left to right: Paula Van Camp, Colleen Pawlicki and Kathleen Baert participate in discussion in a Girls Who Code meeting.

Girls Who Code has experienced enormous growth over the past two years at Marquette, tripling their number of classes and giving more girls in grades 5-12 the opportunity to learn about computer science and engineering.

GWC is a national organization that seeks to spark interest in engineering and computer science by teaching girls how to write programs.

Engineering students founded the Marquette chapter in  2015, after being approached by a Milwaukee-area high school student.  The student attended a national GWC summer camp and wanted to continue learning at home. After seeing a need, the Marquette students took the idea and developed it into the program it is today.

The club held its first class in January 2015 with 30 students in one class, which focuses on the basics of coding using an online application called Codesters.

“We’re doing a variety of different projects that will introduce (the girls) to industry practices and taking the skills that they’ve been learning and applying them to different types of engineering projects,” Sillin said.

In addition to teaching girls how to write programs, one of GWC’s goals is to provide role models for their students and show them that it is possible to be a woman in largely male-dominated STEM fields.

The club consists of six instructors, five of whom are female. Mark Gotthelf, a senior in the College of Engineering, is the sole male instructor.

“Gender discrimination in computer science and engineering is real, and so I think it is important to also have male role models involved to show students that the guys are supportive of them,” Sillin said. “That does scare some people off, and that almost scared me off, because I was afraid to be the only girl.”

Colleen Pawlicki, a senior in the College of Engineering, echoed what Sillin said.

“Having these students see a male role model advocating for equality is really important,” Pawlicki said. “Mark brings a new perspective, and to have those students see that is important.”

Gotthelf wants to see a more equal ratio of men to women in the computer science and engineering industries. While at Marquette, he did a co-op in manufacturing, where he worked with almost entirely men. He said he saw firsthand the effects of inequality in the workplace.

“It was kind of weird,” Gotthelf said. “For me, it actually made an uncomfortable workplace at times because it was just so male-dominated that people didn’t really know how to be respectful all the time, and they didn’t really understand that the comments that they said could hurt someone.”

Girls Who Code’s expansion over the past few years has occurred for several reasons, but the instructors credit participating girls who want a place where they can learn without discrimination.

“I think when you get down to it, the reason why there isn’t gender parity (in computer science and engineering) doesn’t make sense,” Gotthelf said. “It makes no sense why you don’t have a 50/50 ratio.”