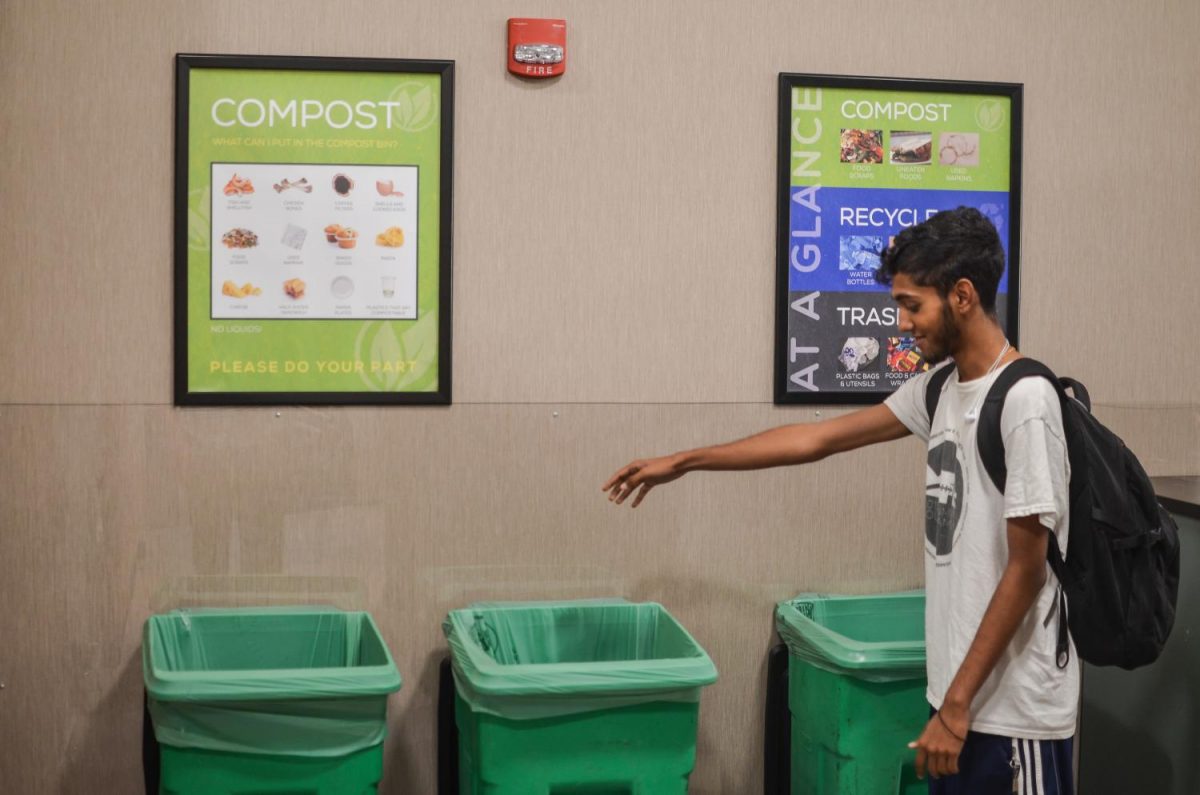 Justin Kollamana, a freshman in the College of Arts & Sciences, uses the compost bin in Straz Hall.

Marquette heightened its effort one year ago to become more sustainable by providing compost bins in all the dining halls. Compost Crusader, Marquette’s composting service, estimates that 56,295 pounds of waste have been diverted from the landfill since last September.

“When I was a freshman and sophomore eating in the dining halls, it was pretty evident to me that the amount of food wasted was astronomical,” he said. “The compost project we are working on is making great progress. It’s different than before in that we’ve made the concrete effort to collect raw data like what types of material we send to the landfill, how much we send and also how much we divert to the landfill, which is crucial information to know.”

Being more aware of the waste Marquette produces is all a part of the new effort to have a strategic approach to become environmentally conscious.

“Adding composting to a commercial kitchen is not terribly difficult, since there are a finite number of people working under a manager,” Ben Russ, an employee at Compost Crusader, said. “It’s not difficult to train a staff. Compost bins in public places are more difficult, since hundreds of people use the receptacle, and many of them will throw non-compostables into the bin.”

Composting bins are available in all the dining halls across campus as well as in the Alumni Memorial Union. In order to tackle such a big project, Compost Crusader and Sodexo partnered with Students for an Environmentally Active Campus to come up with a plan to introduce the compost bins.

In the beginning, staff members took turns in the dining halls directing students where to dispose of their trash. That method was found to be successful. However, it wasn’t a feasible solution year-round. Now, the focus is on educating the community.

“It’s about awareness. We’re trying to be aware of what we’re putting in the receptacles, just educating everyone on the aspects of composting. Improving our signage is a big deal to be clearer about which items go in which areas,” said Melanie Vianes, director of operations for Sodexo on campus.

Chase Ludford, a freshman in the College of Health Sciences, didn’t go to a high school with composting options in its cafeterias.

“I see these videos on social media all the time of these trash mountains, and I just think it’s so sad,” she said. “I think it’s great that I go to a school that is doing its part to reduce the amount of trash in landfills.”

Although Marquette currently hauls almost a ton of compost per week, there is still room for improvement. Members of the community remain hopeful that over time, Marquette will continue to decrease its total waste stream to the landfill and encourage students to do the same.

“If MU as an organization can prioritize composting, then hopefully the student body will catch on and help the university in their goals,” Turek said.