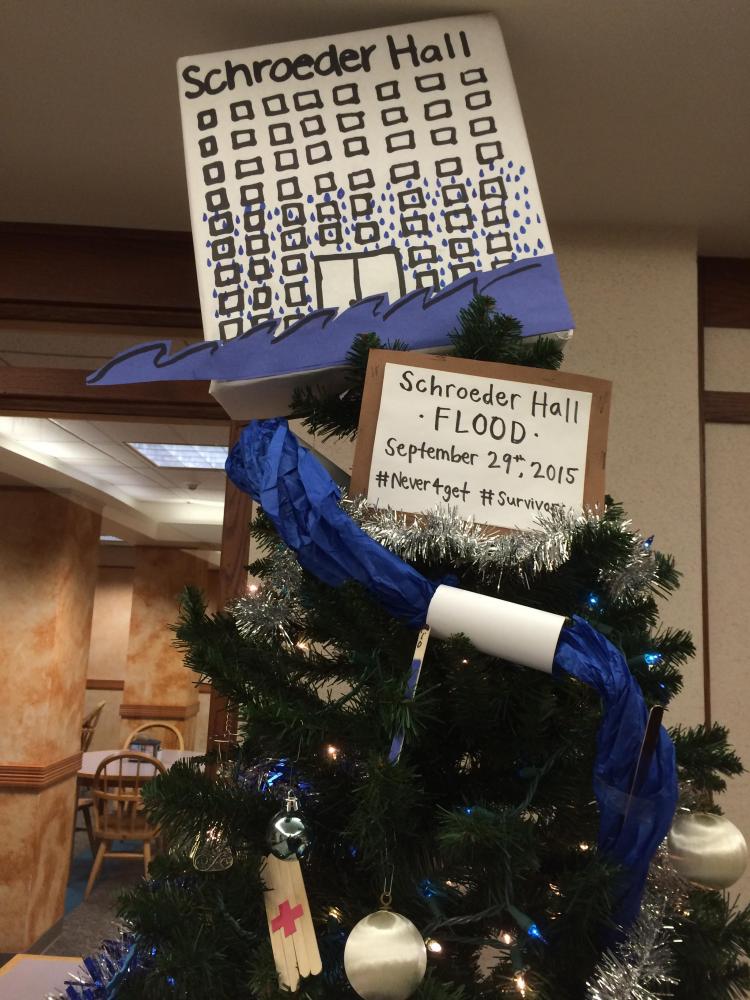 A Christmas tree students made in the Schroeder lobby following the flood. Photo courtesy of Jennifer Walter

Kerrigan Flannery was sitting in her Schroeder dorm room watching Netflix when around 2:00 a.m., she noticed a few inches of water on the floor. Then a little more, until water was bursting everywhere.

Flannery, now a senior in the College of Education, was one of the Schroeder residents affected by a flood on Sept. 27, 2015. The flood began with the accidental activation of a fire hose on the sixth floor. Upward of 18 rooms sustained water damage, and students were not reimbursed by the university for ruined property.

Two years later, the cause of the flood is still unknown, but it is suspected that it was a student and not a building malfunction. The case was actively investigated for at least a month after it happened, and there have been no further leads since.

“The case is still open in that we were never able to get enough information to determine who did it,” Marquette University Police Department Captain Jeff Kranz said. “It’s difficult because of the damage that was done. There were no finger prints or DNA.”

Flannery’s computer charger, school books, two pairs of shoes and a shirt were destroyed in the flood.

“(The university) said they did not insure our property because it was not a building malfunction as much as it was Marquette students,” Flannery said. “I think they should have paid for damaged items because they are in charge of knowing what is going on in the building.”

But two years after the disaster, she doesn’t spend much time dwelling on the damage.

“I don’t really think about it much,” Flannery said. “It’s a good story and it’s kind of funny.”

Cara Labelle, a senior in the College of Arts & Sciences, was living on the third floor during the time of the flood.

“I was coming back from Humphrey, hanging out with my friends. I walked in the dorm and it was flooded, but they still let me in somehow,” Labelle said.

Labelle lived two rooms over from the stairwell, where the flood started. The water seeped into her carpet and caused her room to smell. Labelle’s friends had personal property destroyed due to the water.

“The university was not going to insure anything, and wasn’t going to get the carpet fixed. I never personally experienced any (damaged property), but they were being stingy with helping people out,” Labelle said.

It took three weeks before Labelle’s carpet was cleaned from the water.

“With all the money this school has, I think they probably could have done a little better with helping students out,” Labelle said. “It’s funny now to say that I survived the flood.”