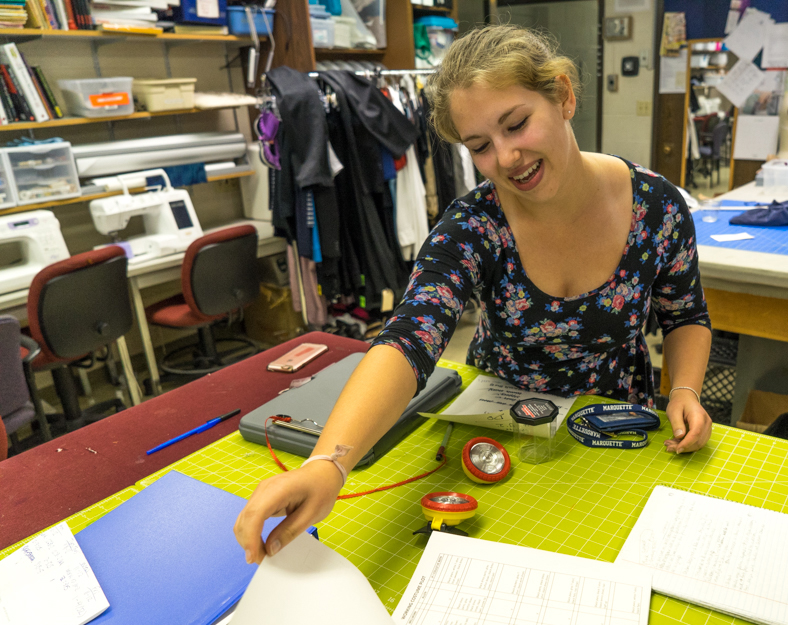 The hopes and dreams, formed and broken relationships and daily trials and tribulations of being an American worker are put on display in Marquette Theatre’s production of “Working: A Musical.”

“Working” is a raw, powerful show that tells the stories, struggles and accomplishments of everyday workers, through monologues and musical numbers. The show is based on Chicago radio personality Studs Terkel’s 1974 book, “Working: People Talk About What They Do All Day and How They Feel About What They Do,” a compilation of interviews with American workers. “Working” was adapted for the stage in the late 1970s. It was updated in 2009 to better fit new careers and modern language. The songs of the show were written in a variety of different musical styles, reflecting the diversity of various occupations.

After a month of rehearsals lasting four to seven hours a day, Marquette Theatre is preparing to present their take on this classic show to an audience. Just like the message of the musical itself, Marquette Theatre’s production of “Working” was made possible through the jobs of every single individual involved both on stage and behind the scenes.

“What I find so important about this show, and what I hope audiences take away, is that so many of us are underappreciated in the work that we do,” director, Niffer Clarke said. “We’re not seen, we’re not appreciated.”

She said that the show has inspired people to look around and see how every job, no matter how big or small it is perceived to be, is important.

To portray that message, Clarke said she chose to block the show in a way that allows the audience to see the actor, crew and stage managers backstage at all times, doing their jobs during the show. With the help of student designers to further her concept and add their creative ideas, the message of the show is further made clear to the audience.

Podcast by Nicholas Cordonnier
With a total of eight actors playing a variety of different characters, Margaret Tomasiewicz, a junior in the College of Communication and a costume designer for the show, had to come up with a way to differentiate the characters while still keeping a sense of consistency throughout.

“For this show, the director wants the concept to be neutrals,” Tomasiewicz said. “Everything is neutral, and then each character has a special color, or a pop or something that shows who they are, but still remaining simple.”

Students are able to take on so many different impactful jobs in the show in part due to the nature of Marquette’s theatre program. Clarke said that students have countless opportunities for experience: theatre students learn every aspect of production, from acting to costuming to set design to lighting.

In addition, students are welcome to audition for and be in as many shows as they want, or to take on different roles in the shows sometimes more than one. Marquette Theatre also provides extensive opportunities to students by allowing anyone to audition, regardless of their area of study. “Working” features a diverse cast from across a variety of colleges.

For Derly Vela, a sophomore in the College of Arts & Sciences, “Working” is his first Marquette Theatre show and he will play multiple characters including a caretaker, publicist and a technical support worker from Verizon Wireless. Vela said that balancing rigorous school work with rehearsal has not been easy.  Vela said that the biggest challenge he has faced throughout the process has been time management, made even more difficult due to initially feeling a little like an outsider by joining a community of people that mostly already knew each other.

But the message behind “Working” has been beneficial to Vela. He said that he has bonded with fellow cast mates over sharing similar experiences of struggles and triumphs.

“You realize after hearing a lot of this stuff, although people have different jobs, they go through similar struggles,” Vela said.  This is what he thinks the message of the entire show truly is.