French defensive specialist may be the key to volleyball’s season

They call her "Minnie," but there's nothing small about Manon Geoffroy's impact on Marquette volleyball. 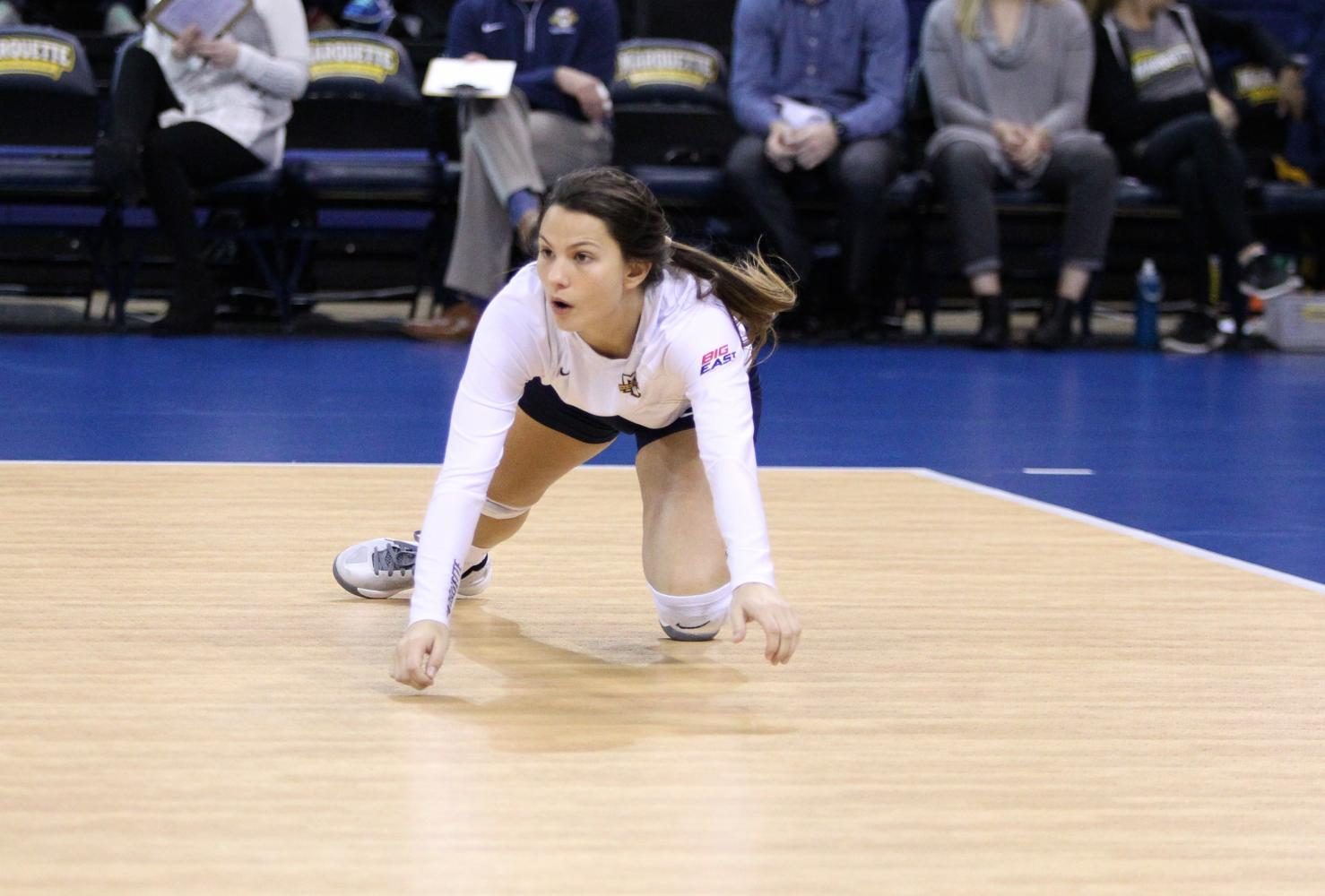 Manon Geoffroy dives for the ball during the 2017 Marquette Invitational.

Before even discussing defensive specialist Manon Geoffroy, there’s one thing that needs to be straightened out.

How is her name pronounced?

Some pronounce it “minnow,” like the fish. Others say it like it’s spelled. Her coach says “man-ew,” but the Marquette athletics website says it’s “man-awn.” Most of her teammates and coaches have taken to simply calling her “Minnie.”

“When I started recruiting her we said, ‘Help me out here,’” head coach Ryan Theis said. “None of us can say it correctly, so instead of offending her, she’s very comfortable going by Minnie.”

Minnie is having a major impact as Marquette volleyball’s only senior. She’s played 40 of 41 possible sets this season and averaged 2.35 digs per set, third on the team. All the while, Geoffroy has exhibited an aggressive flair by going after opponents’ attacks, which she learned from a childhood of playing volleyball in Metz, France.

“Mostly, people back home, (sic) that’s how we play,” Geoffroy said. “I just feel like being passionate drives me into being more aggressive on the court.”

Geoffroy’s passion for volleyball and her studies led her from France to San Jacinto Community College in Pasadena, Texas. Studying international business and playing volleyball simultaneously is close to impossible in France, so coming over to the U.S. was an appealing option for her. She enrolled in community college to learn English.

“Going to a junior college was easier for me because school is a little easier and classes are a little smaller,” Geoffroy said. “I was able to learn the basics of English in an easier way.”

A few months later, after obtaining a much better grasp of American volleyball and English, Geoffroy was ready to transfer a Division I school. Theis immediately liked what he saw on film.

“She’s a dynamic athlete, likes to cover a lot of space defensively and that’s pretty important from that position,” Theis said. “I also liked her aggressiveness.”

Theis admired other things about Geoffroy, too. Her willingness and ability to play all three back row positions gave Theis more lineup options when he needed them most. He also admired Geoffroy’s adventurous spirit, which was on full display when two people she knew were at Marquette’s season-opening set of matches in Hawaii.

Geoffroy loved that Marquette was the only school on her list with an international business major. Traveling to nine different states as part of the BIG EAST wasn’t a bad perk either.

“When I came for a visit, I asked about where we would travel,” Geoffroy said. “A good thing about the BIG EAST is we travel to really nice places, such as New York and Washington … That’s really important to me.”

As the only senior on the team, Geoffroy is responsible for leading a back row in transition. Longtime starters Lauren Houg and Ellen Hays graduated last season, as did backup defensive specialist Nicki Barnes. In their place are new libero Martha Konovodoff and several outside hitters rotating back row duties. Still, it wasn’t hard to replicate last year’s chemistry.

“One good thing about Marquette is we are able to go to school before we start preseason,” Geoffroy said. “When we actually start practicing with the coaches, we already know each other and we already have chemistry.”

Theis said Geoffroy made “huge strides” in the spring exhibition season with her passing. On the zero to four scale Theis uses to grade players’ passing abilities, Geoffroy has slowly climbed toward a 2.6 average, which is a personal best for her, and Theis’ goal for players.

Although Geoffroy appears resolute on the court, calmly slapping hands with teammates after Marquette points, she has a lighthearted side, too. Theis chuckles as he recalls Geoffroy teaching teammates phrases in French during two-a-day practices such as “How are things going at Marquette?”

Since Geoffroy’s family has a lot farther to go than most of the team’s, her dad has already made travel plans for volleyball’s Senior Day in November. In the meantime, Geoffroy has only one goal in mind for this season: “Going as far as we can in the NCAA (Tournament).”

If that goal becomes a reality, a lot more people are going to have to learn how to pronounce her name.