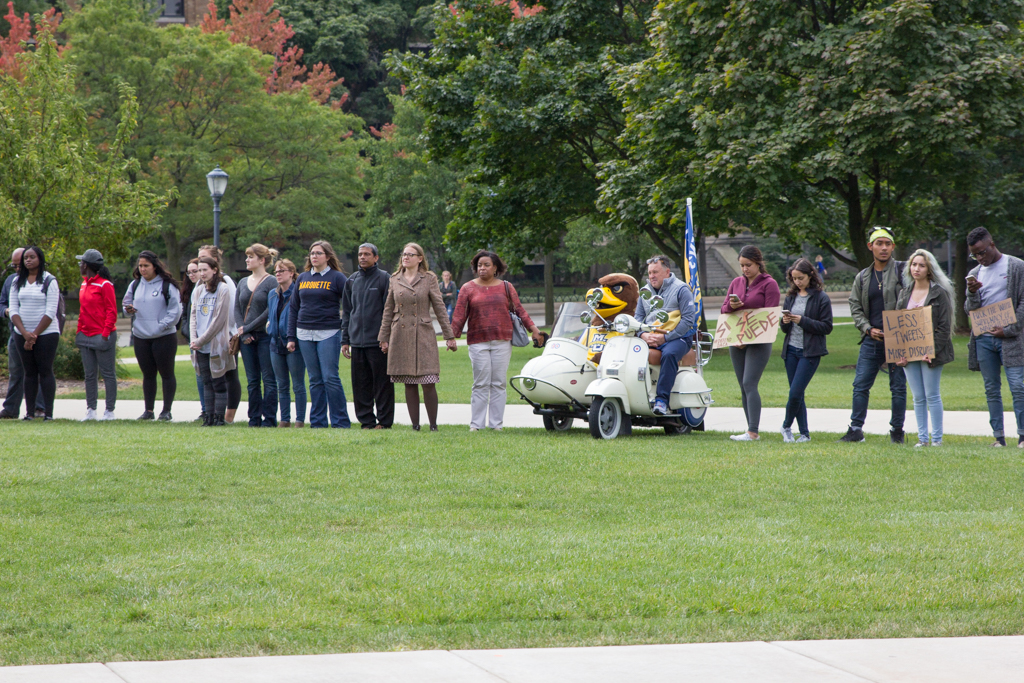 The Trump administration’s recent decision to repeal the Obama-Era Deferred Action for Childhood Arrivals executive order has not been well-received, and communities across the country have organized to support those affected by the decision. True to recent form, University President Michael Lovell issued an email voicing support for affected students.

Marquette has an obligation, not only as a Catholic Jesuit institution or as an urban university, but as champions of opportunity, to defend its undocumented students. Their promptness in voicing support is commendable, but the next step needs to be declaring the university a sanctuary campus.

To protest the DACA decision, student organizations held a rally in Westown Square last Friday where students, staff and faculty were welcome to share their thoughts and feelings regarding the issue. Xaivier Cole, vice president of student affairs, attended to offer his and the university’s support.

It was encouraging that many Marquette community members felt moved to show their support for DACA recipients and undocumented students. That said, the number of students walking past the rally in apathy, and the vitriolic comments a few students lobbed from a McCormick window, are proof that Marquette has a lot more to do to build a truly and wholly supportive campus culture.

Marquette is promising tangible efforts to support its DACA students. Jacqueline Black, associate director for Hispanic initiatives, urged students to contact their representatives. She also made it clear that if a student is eligible to renew their DACA, but cannot afford to, the university would offer financial support. The university also lists resources for undocumented students on its website.

These are commendable, tangible actions, but may not be enough.

If Congress does not reinstate DACA, or provide a comparable alternative, undocumented students will face the risk of deportation. No amount of financial support will stop that. How can Marquette claim to be a Hispanic-serving institution without also being a sanctuary campus?

The Marquette Young Democratic Socialist student organization began circulating a petition during the rally, asking Marquette to declare itself as a sanctuary school. In response to the petition, university spokesperson Chris Jenkens said the provost is always willing to engage with students’ concerns.

Sanctuary status does not necessarily protect students from deportation, but promises that agents of the university would refuse to hand over undocumented persons to the authorities.

The university has a decision to make. Other schools that have declared themselves sanctuary campuses have been criticized for their willingness to ignore immigration law. Moreover, legislators from other states have begun writing bills that would make sanctuary schools and cities illegal.

While critics of sanctuary spaces question their efficacy and lawfulness, it would be an honest step forward, rather than the tepid question marks left by much of the university’s statements of support.

It seems to be a trend that in instances of contention, high-ranking university leadership resign themselves to sending 500 words via email and then moving on.

Marquette needs to take preventative measures, because words have never been enough. It already sends a message of disharmony that neither Lovell nor Myers attended the rally.

Every member of Marquette’s leadership should have been at Westown Square to show their support for these students, and every member of the leadership needs to commit themselves to the continued diversification of the community.

But this is about more than diversifying campus. It is about taking full advantage of our social capital as an institution in favor of those more vulnerable than ourselves. We need to stop talking about diversity on campus as a demographic obligation rather than a moral one.

The best way for Marquette to stay true to its Jesuit mission and protect its undocumented students is to dedicate a sanctuary space explicitly for that protection.