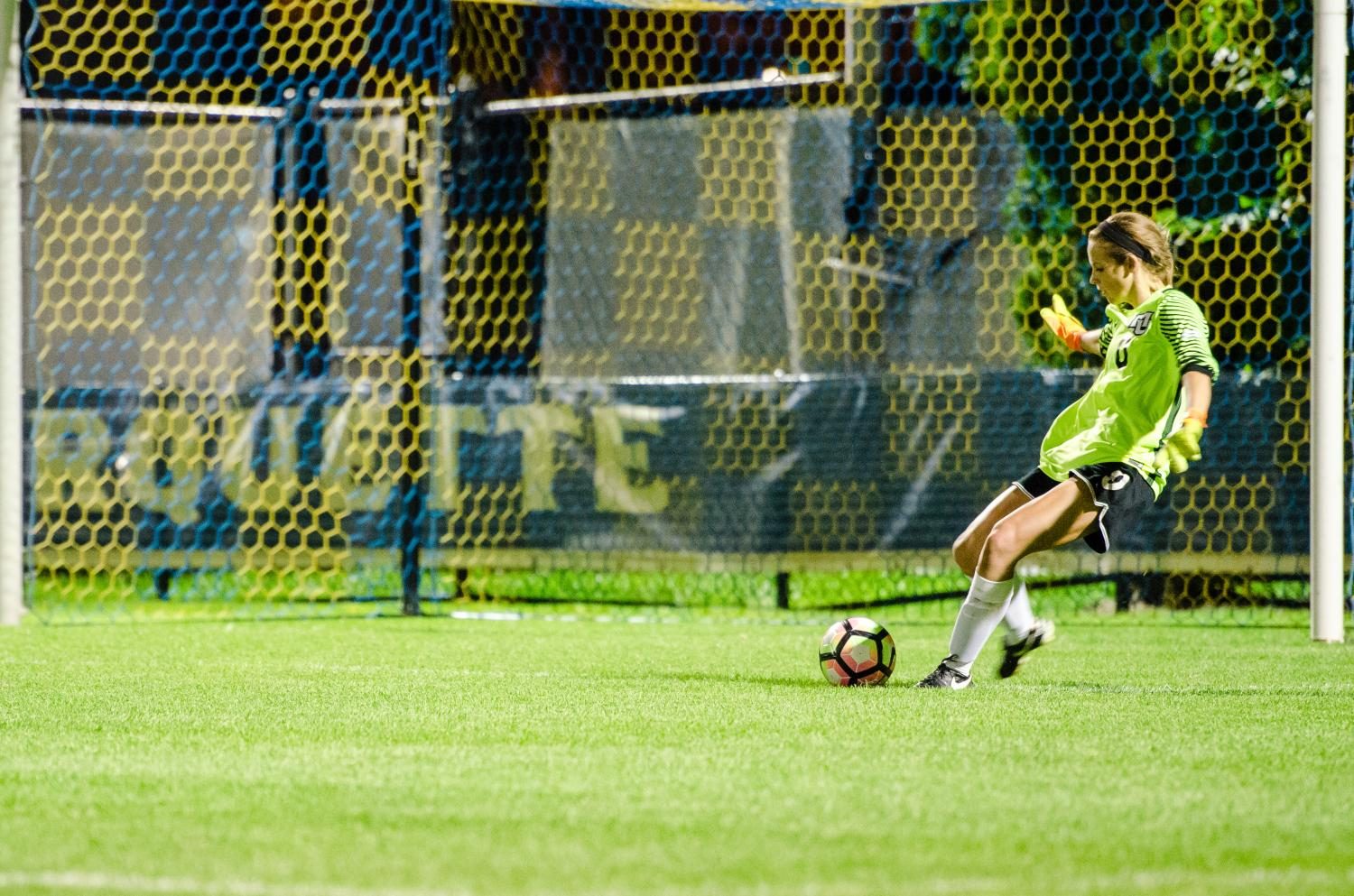 Women’s soccer had fairly high expectations for its defense in the days leading up to the 2017 season.

Sophomore goalkeeper Maddy Henry would be in the net again after starting all 22 matches of her freshman year. The combination of experienced veterans Madison Dunker and Ryley Bugay would supplement young players Mary Kate Simon and Bri Jaeger, both of whom were coming off redshirt seasons.

Even then, nobody could’ve expected the team’s latest defensive feat. After giving up five goals in the opening weekend against Stanford and Kentucky, Henry and the Golden Eagles blanked their next five opponents en route to a 541-minute and 44-second shutout streak.

It is easy to credit the streak to Henry’s superb performances in the net, yet she and head coach Markus Roeders do not hesitate to give credit to the back line and everyone else in front of her.

“The back line has been doing insanely well and I can’t see that dropping off anytime soon,” Henry said. “They’ve been putting in all the work and I just clean up what happens to slide through.”

Roeders says the effort is not exclusive to the back four. Forwards Darian Powell and Jamie Kutey have been able to keep opponents’ defenses on their heels.

“Our forwards do a tremendous amount of work defensively creating pressure,” Roeders said. “Our midfield works extremely hard on both ends and the back line is doing what they’re supposed to be doing. It’s never just the goalkeeper.”

The numbers back up Roeders’ claim. During Marquette’s five shutouts, Henry has only needed to save 20 shots, four per match.

With the back line clamping down on opportunities in the box, opponents have consistently had to settle for lower quality shots. Only 25 percent of opponents’ shots during the five shutouts have been on goal.

Whenever the defense commits a rare lapse and give opponents a good look on the goal, Henry has been able to rely on past experience. Despite her underclassman status, Henry has played 2,742 minutes and started all 30 matches of her career.

“It’s a lot better than last year just because I have a year under my belt,” Henry said. “Knowing what to expect has been really great.”

Another thing that prolonged the shutout streak was not focusing on said streak. Dunker said Friday that the moment it affects their mindset, they’ll “stop playing (their) game.” Henry said she didn’t even know she was close to the program record (730:30) set back in 2009.

“Honestly I couldn’t even tell you what the record was,” Henry said. “I was just taking it game-by-game and opponent-by-opponent.”

The streak came to an end Sunday at Rhode Island. The Rams, fresh off a week of rest, clipped the streak at 541 minutes when Allyson Reynolds rocketed a shot from the top of the box into the right corner of the net.

“We kind of knew that she was going to be really good with her right foot,” Henry said. “Back post, upper 90… it was a fantastic shot. You have to clap your hands and give it to her.”

At the same time, there were some benefits to the longest shutout streak of Henry’s career coming to a close Sunday.

“I told the team afterwards, ‘We’re probably not going to go unscored on for the rest of the year, so if we’re going to allow a goal, let’s allow one as long as we win,’” Roeders explained. “You don’t want it to happen where you’re all of a sudden losing 1-0 or losing 2-1, so we got that monkey off our back.”

A 500-plus minute shutout streak is hardly a new phenomenon for Roeders’ group. Eight years ago, another sophomore keeper, Natalie Kulla, set the program record for the longest shutout streak at 738:30.