First Near West Side farmers market season comes to close 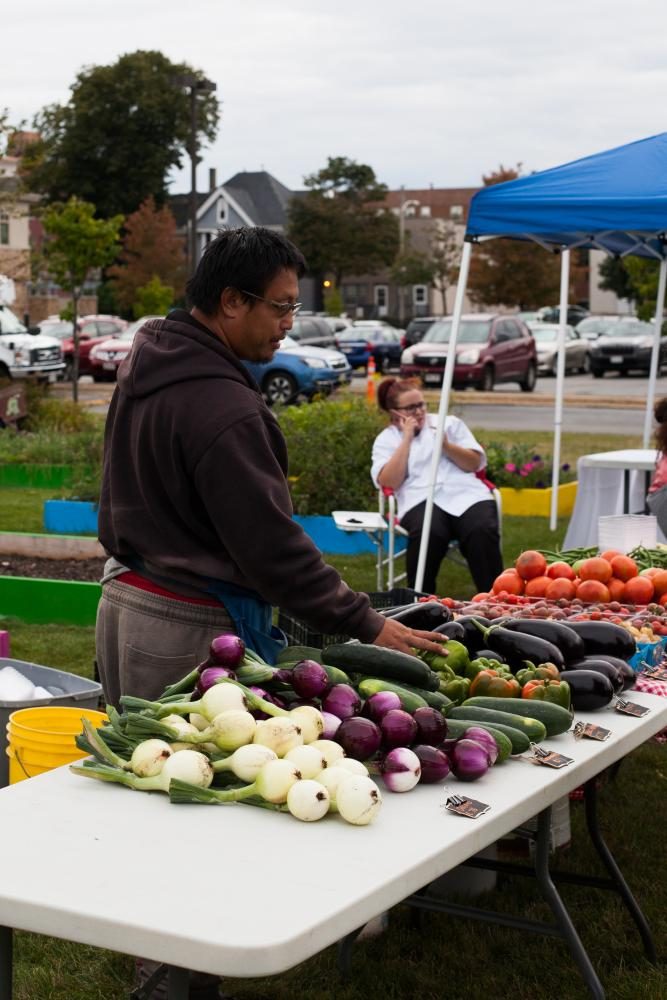 A customer looking at fresh produce at the Near West Side farmers market.

Karen Pauli loved cats growing up, but never had one. As she got older, Pauli never quite found a career that fit her right, so she decided to start a business that centers on the animals she loves.

Pauli is just one of many vendors with a table at the Near West Side Farmer’s Market.

The idea stemmed from the need for fresh produce in an area that does not have access to many healthy food options, as well as a way for community members to showcase their creative abilities. Vendors sell produce, baked goods, prepared food, jewelry and other artwork.

At Marquette, Linda Menck’s visual communication class was looking for ways to incorporate the surrounding community into a farmer’s market. Other students, like Elizabeth Killian, a sophomore in the College of Education, got involved through the Center for Peacemaking.

Around the same time, the Tosa Farmer’s Market was looking to expand. According to Kelsey Otero, associate director of social innovation initiative, the farmer’s market approached the Near West Side, looking for opportunities.

The proposal was funded by the Buy Local, Buy Wisconsin program of the Wisconsin Department of Agriculture, Trade and Consumer Protection — but Otero said there were more parties involved in the market’s establishment.

The vendors at the market pay nothing to sell their wares, so they are able to keep all the money they make as profit. All of the vendors are local, and many live blocks away from the market’s venue.

The green space that serves as the market’s setting is owned by the Milwaukee Center for Independence, who let the Near West Side Farmer’s Market use the land at no cost.

Vang Lee grows his produce locally at the Mequon Preserve Area through a program that gives urban farmers land to grow their vegetables. This season, Lee has an acre and a half. He appreciates the market’s mission. “I figure since I am a part of this community, I want to contribute something,” Lee said.

Hannah Fisher, the owner and operator of Kaleidoscope Gardens, also sells produce at the Tosa Farmer’s Market. When Fisher was approached about expanding her fares to this community market, she decided to give it a try. Being local, she said she enjoys that it only takes her three minutes to get to the venue, and like Lee, she said she finds it important to “get more food to this area and my neighborhood.”

Otero said the market is getting positive feedback from vendors and visitors alike.

“The hope is that people went and had an amazing time, and not only that, but want to be part of the planning process,” Otero said. “It’s been amazing to see students from Marquette and people from the community who live there and work there all in the same area —mixing, mingling, talking to each other. That has warmed my heart.”

The last Near West Side Farmer’s Market of the season will be Sept. 14 from 4-7 p.m. The Marquette community, the neighborhood, the Tosa Market and the Milwaukee Center for Independence will be involved in planning for next year’s market.