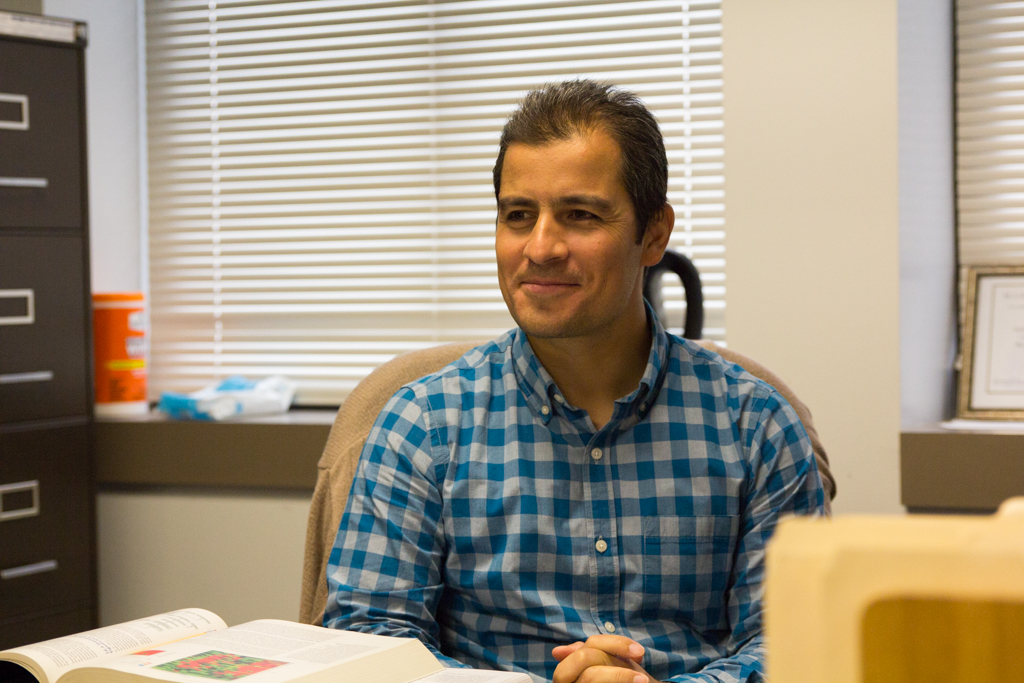 Serdar Bozdag, assistant professor in the department of MSCS, discussing the new program.

Bioinformatics, a combination of biology and data analysis, is now available as a major to Marquette undergraduate students.

Bioinformatics was born from the massive amount of biological data that need to be analyzed, said Professor Edward Blumenthal, chair of the department of Biological Sciences.

“Biologists are not trained in how to deal with these data sets. We can generate them, we can collect the data, but we are not trained in the statistics and the computer science in order to analyze them and get the meaning,” Blumenthal said. “Then you’ve got computer scientists who are trained at how to analyze these data sets, but they don’t necessarily know the biology.”

Bioinformatics was introduced to produce people who are proficient in both the fields of biology and data analysis, Blumenthal said.

Despite the separation of the departments that deal with bioinformatics, the program emerged naturally at Marquette. In 2001, Marquette and the Medical College of Wisconsin launched a master of science degree in bioinformatics. The growth and significance of bioinformatics since then prompted Marquette to introduce the undergraduate program.

“This was a pretty easy major to put together in the sense that we already had the courses, and we collaborate with mass statistics and computer science,” Blumenthal said.

Serdar Bozdag, assistant professor in the department of MSCS, took a bioinformatics course while studying for his P.h.D at the University of California Riverside, and he has been pursuing the subject ever since.

“For me, this field has a direct impact on human health, plant health and also the well-being of all living systems. I am motivated in this research because I know that the things we develop here will help to save lives hopefully in the near future,” Bozdag said.

Bioinformatics was an emerging field 15 years ago. Since then, advances in technology have propelled the field to new heights. The Human Genome Project, which looked at how human DNA was sequenced, took about 15 years and $3 billion to complete. Now, the same thing can be done in a single day and costs less than a thousand dollars, Bozdag said.

Similar to bioinformatics in that it focuses on programming to organize large sets of information, the data science major appeals to undergrads interested in using computers for statistics and analysis. Sophomore Aaron Moriak is one of these students, who had immediate interest in the program when he saw it was available last fall.

“I want to use the stuff I learn in data science to try to make the world we have more efficient. There’s a lot of data out there that doesn’t get analyzed and doesn’t get understood,” Moriak said.

Graduates in both fields are also in high demand, according to Bozdag.

“The good thing for our students is that there are not too many bioinformatics undergrad majors in the nation,” Bozdag said. “Our students, from day one, will get all these necessary chemistry classes, biology classes, statistics classes and computer science classes. They will be a very attractive person in the field right after a bachelor’s degree.”