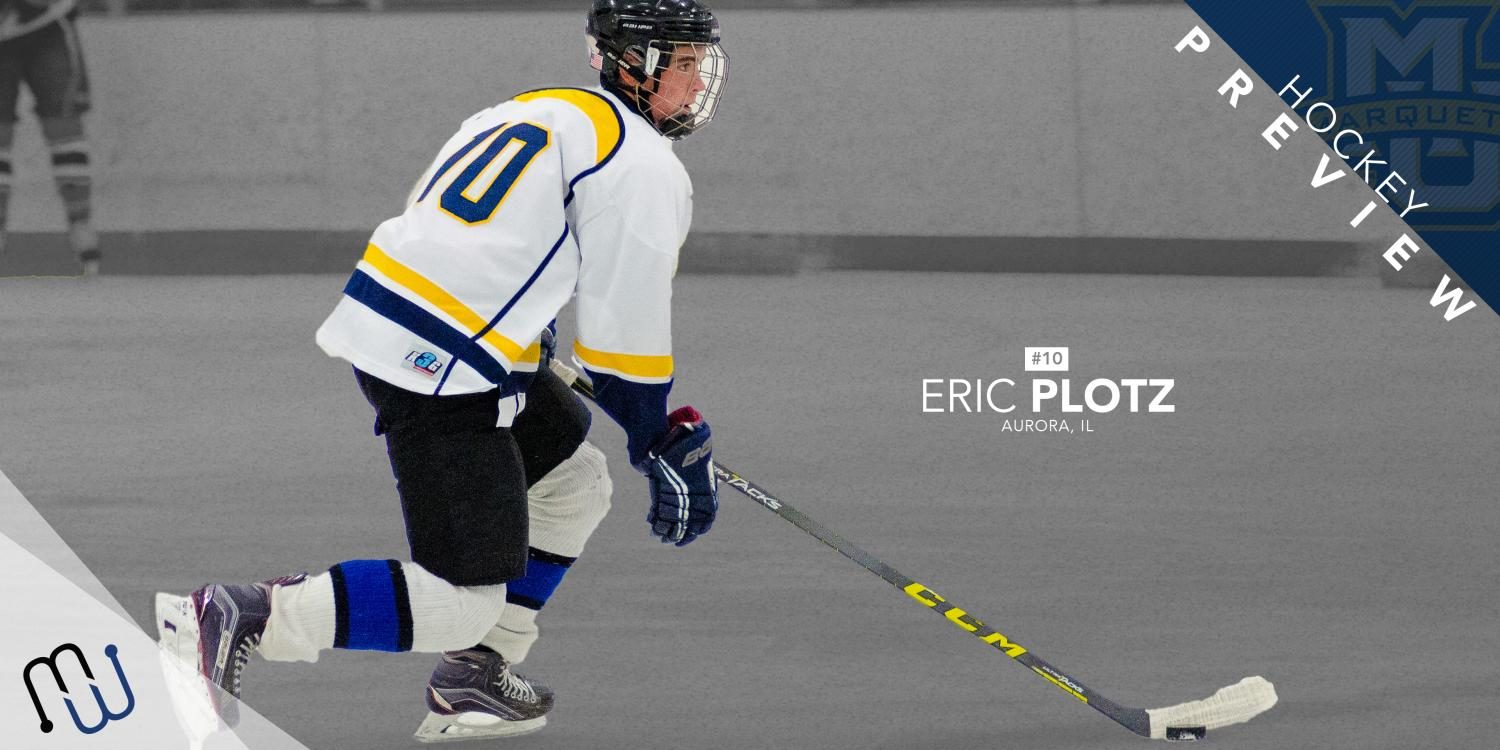 Senior Eric Plotz is one of the experienced players at the helm of club hockey.

It’s not quite October yet, but club hockey is starting earlier this year; with its first match Sept. 15 at Notre Dame. The team will have to round into form without seven of its graduated seniors from last season, but head coach Will Jurgensen isn’t overly concerned.

“Our attitude and culture is not going to change,” Jurgensen said. “We want to stick with what’s made us successful.”

This will be Jurgensen’s fourth season as the team’s coach, a title he assumed after playing on the team as a student for four years. Last season was a bit disappointing for Marquette; the team ended the season 1-2 at the AHCA Division III National Tournament.

“They know the type of work ethic…it’s just continuing to build off of that,” said Jurgensen.

The North Collegiate Hockey League announced last December that the Golden Eagles would be promoted to Division II as a full member, which means they’ll be able to compete for a conference title in its first year. Having to deal with a significant increase in competition level plus a team in transition might take a lot of coaches aback, but Jurgensen is trying to take it all one step at a time.

“We lost a lot of guys, but at the same time we have a lot of talented hockey players coming in,” Jurgensen said. “Our biggest challenge is just going to be to mold the team to doing Marquette hockey.”

Coach Jurgensen said he wants to continue doing what has been working: having the seniors lead the team. This season will feature the first class of players to play their entire tenure under Jurgensen, who began coaching the team in 2014. Brian Kennedy, senior, will wear the “C” for captain, and other returning seniors – Robby Arner, Matt Mogensen, Eric Plotz, and Marc Shipbaugh – will fight for the “A,” which denotes the alternate captain.

With a new season, new players and a new division, getting the team leaders in place will be crucial, especially with the new competitors. Being in Division II means the Golden Eagles will face more Chicago teams, including the DePaul Blue Demons, Robert Morris Colonials and the Aurora Spartans. The local teams will likely offer tougher competition than Marquette typically faced in the lower division.

“I think we’re gonna compete with them without a doubt,” Jurgensen said. “We’re not trying to be a middle of the pack team.”

With big goals and all new opponents, Jurgensen is hopeful the upcoming season can be a landmark one in the history of Marquette club hockey.

“It’s a good sign for us as a program and we’re moving in the right direction,” he said.

Tryouts are to be held Monday night. After the team’s opening joust with Notre Dame on the 15th, they’ll play the Fighting Irish again the following night at 9:15 p.m.