Volleyball wins one of three in Oahu, upsets No. 20 Hawaii 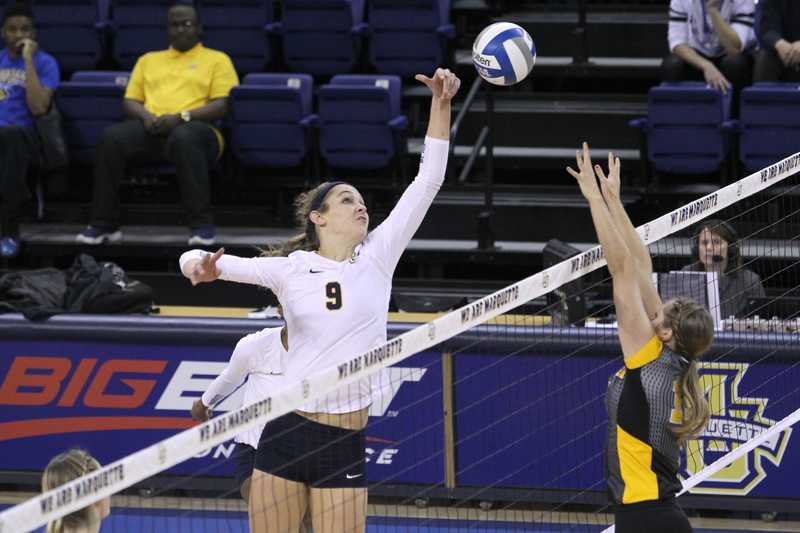 Hawaii gave Marquette some problems at the net, collecting 18 total blocks. The Golden Eagles dropped the first set after losing a five-point lead and seemed to be headed towards dropping the second set when Hawaii went on a 7-0 run. However, a subsequent 5-0 run helped Marquette take the set and even the match at 1-1. Hawaii and Marquette exchanged victories in the third and fourth sets, sending the match to five sets. Marquette opened the fifth set on a 6-0 run, but Hawaii used a run of their own to tie the set at 12. The Golden Eagles then closed out the match with three unanswered points.

Marquette didn’t have the same luck against UCLA. The Bruins took the first two sets, creating a tough hole for Marquette to climb out of. The Golden Eagles were able to win the third set, but dropped the fourth set after three Marquette errors allowed UCLA to claim victory.

San Diego was firing on all cylinders, allowing them to sweep Marquette. The Toreros combined to hit .311, including a whopping .395 in the second set.

Setter Lauren Speckman was one of the stars of the weekend. On Friday, she dished out 50 assists, a career-high. She followed up Friday’s performance with 47 more assists on Saturday and then closed out the weekend with 31 assists and 10 digs on Sunday.