Bugay, Beard take advantage of opportunities in 2-0 win over Louisville 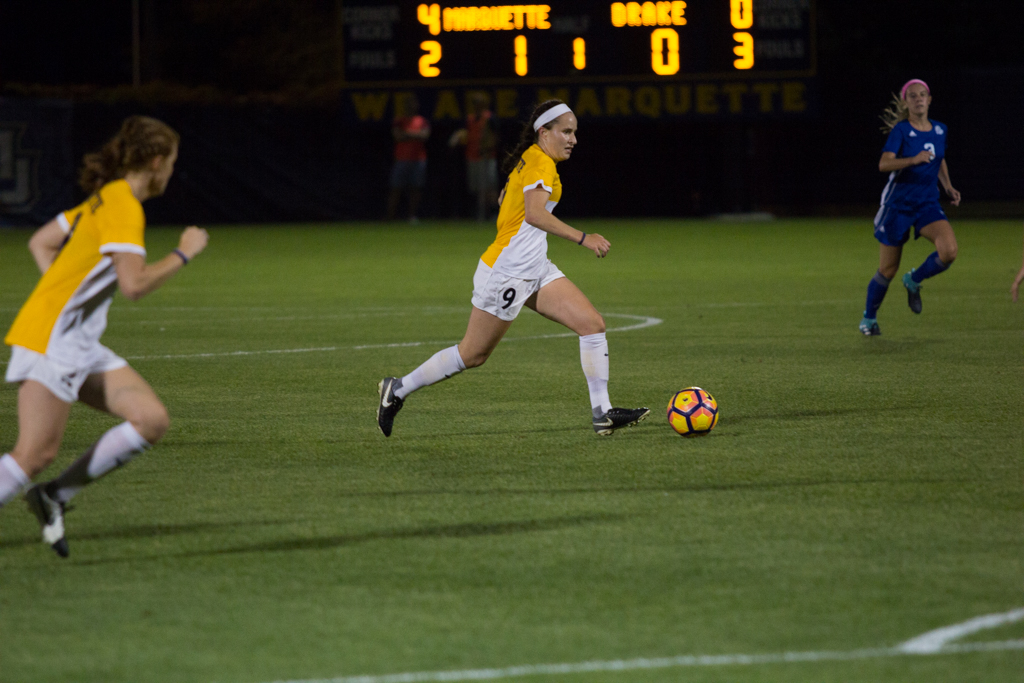 Throughout this season, redshirt junior Ryley Bugay has been an essential piece of the puzzle on defense, averaging 84.75 minutes per match as the defending midfielder.

“She’s been kind of like the glue that we need in our midfield and back lines,” head coach Markus Roeders said. “She covers a lot of ground for us really well and she makes it really difficult for opposing teams to make that final pass or get behind us or expose us.”

But in the 51st minute of Marquette’s eventual 2-0 win at Louisville Sunday, the West Lafayette, Indiana, native had to take on a different role. Following a Louisville handball call within the box, it was up to her to take the penalty kick to break the 0-0 stalemate.

“It was a little nerve-racking going up to the PK,” Bugay recalled. “But it’s just about focusing in and kicking it into the back of the net.”

She was able to do just that. As Louisville goalkeeper Gabrielle Kouzelos quickly dove to Bugay’s left, the redshirt junior kicked the ball into the right corner of the net for her first career goal.

“I think she played a real good game,” Roeders said. “She stepped up today when we needed someone to step up in the PK and did a great job of finishing it.”

In a game of few opportunities, Marquette was able to make the most of the ones that came their way. “Neither team had a lot of opportunities,” Roeders said. “Sometimes it boils down to these kind of things.”

Marquette was again able to take advantage of a Louisville miscue in the 69th minute. As Kouzelos vacated the goal to play closer up to the ball, senior Eli Beard chipped a shot from 40 yards out for her first goal of the season.

“The goalkeeper ended up coming out farther than probably anybody expected,” Roeders said. “And then for Eli to have the foresight, the feel and also the skill to hit a ball from 40 yards out, that was pretty special.”

Marquette now enters September with a 3-1 record despite already playing three Power Five programs, including second-ranked Stanford. The Golden Eagles will not play another school from one of the six major conferences until BIG EAST play.

“It’s definitely a confidence booster,” Bugay said. “It definitely a very important step for us going forward not only because Louisville is a great team because road trips are always a bit different. There’s a bit of a different atmosphere.”