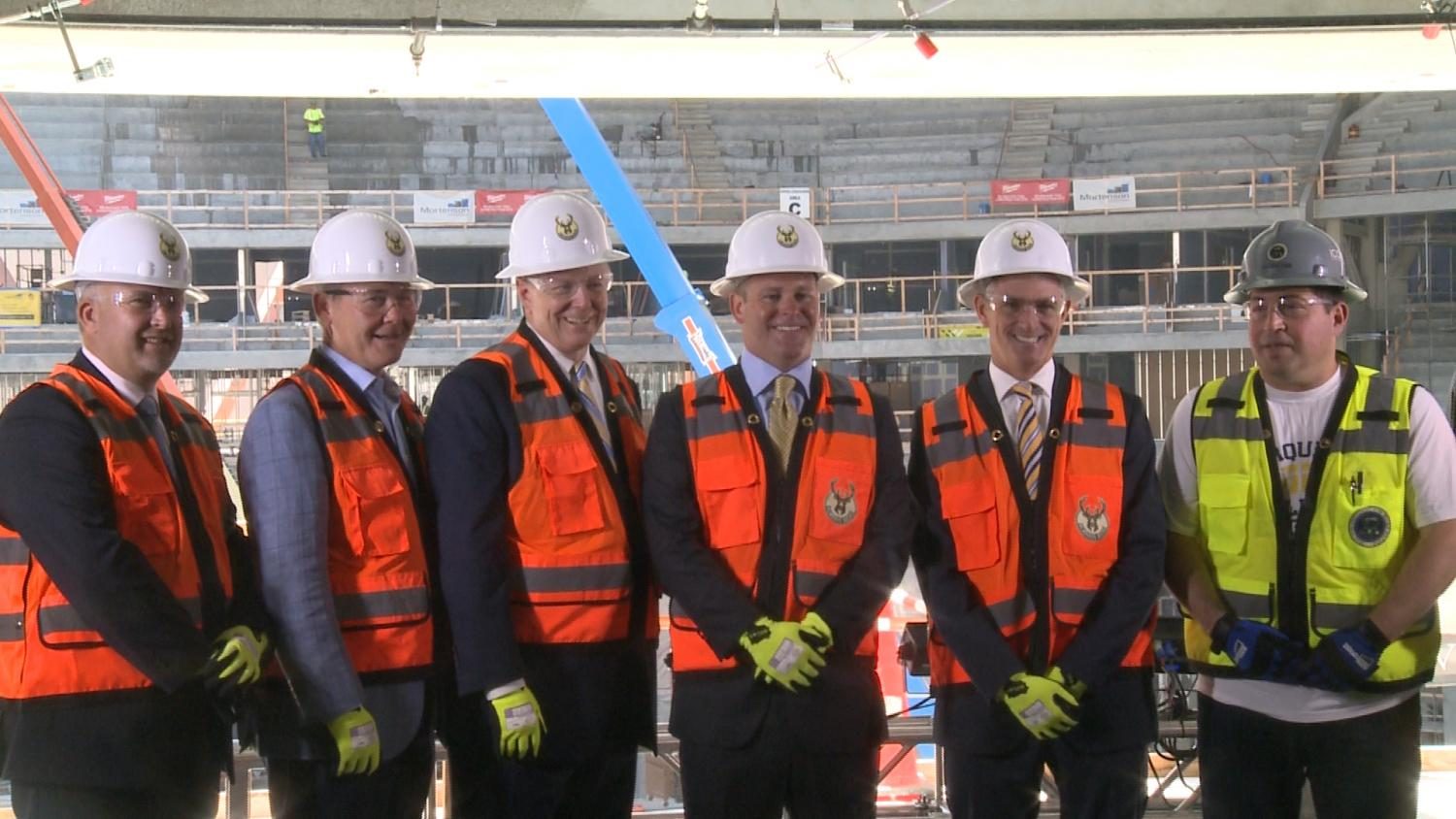 Marquette and Bucks executives pose for a photo opportunity at the unveiling of the new home for Marquette basketball. The Golden Eagles will play at the new arena starting in 2018.

Marquette men’s basketball will have a new home to start the 2018-’19 season and it’s the one most people expected. Tuesday morning, Marquette and the Milwaukee Bucks jointly announced a seven-year agreement for the university’s men’s basketball team to play home games in the new arena, which will open next year.

“Marquette basketball is a staple of Milwaukee and we are proud to welcome the Golden Eagles to their spectacular new home,” said Bucks President Peter Feigin in a statement. “As Marquette continues to grow as a national basketball power, we expect a lot of exciting college hoops to be played at the new arena for years to come.”

Marquette and the Bucks have shared the same arena, the BMO Harris Bradley Center, for the past 29 years. The upcoming 2017-’18 season will be Marquette’s final one in the BMO before moving into the new arena.

“As Marquette University enters its second century of basketball, today marks another historic milestone for our community and passionate alumni,” said university president Michael Lovell. “They’ll now experience elite-level basketball in one of the most innovative arenas in the world. This is a time of unprecedented growth for Milwaukee. So much of that excitement is centered on this remarkable arena, and we are proud to call it our home.”

The $524 million facility is partially financed by $250 million worth of public money. The exact terms of Marquette’s lease were not specified.

“I think the new arena is incredible for the entire city of Milwaukee and the state of Wisconsin,” said Marquette men’s basketball head coach Steve Wojciechowski. “I think this is going to be one of the crown jewels of this city and, certainly in the NBA, it will be the finest arena.”

Speaking of home court advantage, coach Wojciechowski feels that the new arena will help create one of the most unique atmospheres in college basketball.

“Well I think the greatest home courts are the one where the teams and the fans feel connected,” continued Wojiechowski. “And walking in here today I felt like this was the building that this will happen. I think the fans will feel like they’re a part of the game and I think the players will feed off of that energy. This is the type building that helps create that.”

“Our players are very excited and obviously they know the building is going up. We have not been able to bring our team over here yet. But we will when the guys get back to school.”

The announcement was the latest component of a growing partnership between the Bucks and Marquette. The two sides also have a deal in place for the Athletic Performance Research Center, which is under construction on the east edge of campus.

“I couldn’t be more excited that the Bucks arena is our new home as well,” said President Lovell. “We’re not just going to build a new basketball arena, but we are going to help re-define the city of Milwaukee.”