Roger Waters Us + Them is exhilarating experience from start to finish 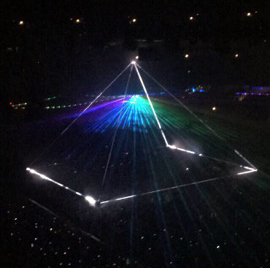 8 p.m., as people are finding their way to their seats, the projector turns on and we find a woman sitting on the beach. Thunder’s rolling out in the distance, clouds are gray, but the water’s calm. Then an odd thing happens — as the woman is harmonizing in the background, the clouds slowly become red and it seems like the sky is about to fall apart. The beach scene gets swallowed up and we’re now hanging out in an orb floating through space. Waters and his touring band open up with the great “Eclipse off of Dark Side of the Moon.” The orb continues to travel above a metropolitan city, and then the famous factory from the “Animals” album appears. There’s a long hallway with the door at the end of it. The building is discolored, lights are flashing through the hallway, and the camera is slowly tracking forward. It’s unsettling and it’s as if the audience had just found themselves in the middle of a horror movie. Waters is doing his famous bass riffs for “One of These Days,” and when the ending solo kicks in, a grocery store appears where a cloaked man is going down aisle to aisle cutting between footage of him carrying an axe (the only lyrics to that song are “One of these days I’m going to cut you into little pieces,” so you know it makes sense in an interpretation of the song. This, my friends, wasn’t a usual rock show. This was a Roger Waters show.

I’ve been to tons of rock concerts, but nothing remains as surreal as a Roger Waters show. When I was at “The Wall” five years ago at Wrigley Field, it was pretty much the same vibe. Fans aren’t standing up and getting into the groove of their favorite songs — most folks are sitting down, taking in all the visual effects and music being performed. For example, during “Time,” animated clocks were flying through the screen. When the show’s intermission wrapped up, what looked to be an ordinary lighting grid came down and then smoke pillars starting to rise up from it. Then multiple walls starting to rise up from the same grid once again showing the album cover for Animals, accompanied with a little pig floating. One my favorite things from the show was when “Money” came on, and there are ten different projection screens all moving up and down interlaced with bright colors and members of the touring group playing instruments. I don’t know how he gets the ideas for production values like that, he’s playing on an entirely different field. 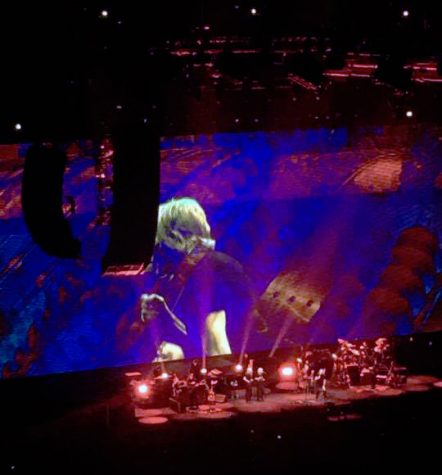 For two and a half hours, Rogers did his favorites from his days in Pink Floyd, as well as a few songs off of his recent album, “Is the Life We Want?”, his first solo album in 25 years. Waters’ previous tour was “The Wall,” where he played the entirety of the album as well as a few songs not featured on the album or movie. In the Waters and David Gilmour-led era, they produced concept albums about war, greed, mental illness, and that’s just barely scratching the surface. Waters took those elements and created something that applies to situations currently going on in the world. During “Another Brick in the Wall Part II,” local Chicago choir students came on stage with orange jumpsuits, then when the solo kicked up, they took off it revealing a t-shirt with the word “resist”. That’s one of the biggest themes of this tour: resistance. to not give in to fascist ideologies, to not be a metaphorical pig, to be better toward one another. There was haunting footage throughout the show to emphasize this theme — People getting killed by missile drones, refugees trying to leave their country, a sea of animated bloody hands trying to climb to safety. It wasn’t the easiest show to sit through, but it was definitely something to remember.

What I love about Waters is he’s a very theatrical performer onstage. The special effects are out of this world. Besides the floating pig off of “Animals” flying around in the stadium, he also had an inflatable orb rotating around United Center with a camera inside showing the fans in the audience up on the projector during the last songs off of “Dark Side.” There was a stage light that was moving around like a helicopter flying trying to find someone in the audience to “stand still laddie” (it set up the line of “Happiest Days of Our Lives” into the “Another Brick in the Wall Parts II and III). The show used footage from the “Welcome to the Machine” and “The Wall” movie, but then there was original material created for this tour. During “Wish You Were Here,” folks see an animation of two strangers hands. They are slowly reaching across the screen while Waters is in the middle playing on the guitar. As the song gets closer to its conclusion, the hands begin to crumble into little specs that float away.

The end of the show was an incredible finish to an unforgettable concert. The famous prism from the “Dark Side” album appeared bouncing lights across the stadium, and a rainbow began to shine through. The projector was shut off for this one special moment, and I was mesmerized. Waters loved playing onstage the entire time. He was happy that he sold out the stadium for the first two nights, and it showed. “Those kids that were singing earlier, those aren’t ours, those are your kids from the city of Chicago,” Waters said during his special thanks speech to all the touring members who were on stage with him throughout the show. I’ve been lucky enough to have gotten to see him perform live twice, and he’s just as humble as he was back at “The Wall” show. 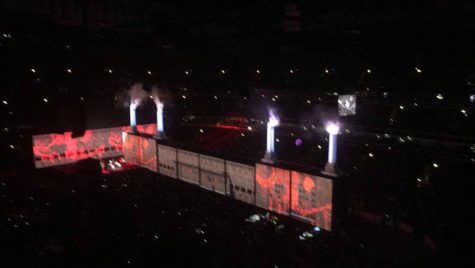 The encore played “Vera” into “Bring the Boys Back Home”t into “Comfortably Numb.” Everybody was quiet for most of the concert, but right then and there the room was filled with folks singing along with Waters and the band. I totally missed this, but Eddie Vedder of Pearl Jam was singing backup vocals too. Not sure what he was doing back in Chicago that night, but hey it was cool nonetheless. When the guitar solo starts up, the two strangers hands join together and another rainbow splash comes on the projection screen. It felt like Pink Floyd, it sounded like Pink Floyd and it was an exhilarating experience.

I thought nothing was going to top “The Wall” concert, but I was wrong. 24 plus hours after getting to experience this, I still can’t process everything that happened in that brief period of time. It felt like I’m back in high school again, listening to all these great albums and remembering why I fell so deeply in love with Pink Floyd and their music. I don’t think anything is going to top this. If you’re going to the Milwaukee show, I envy you. I wish I could experience all of this again.