Summer league analysis: Dwight Buycks has a lot going for him, but a major flaw remains 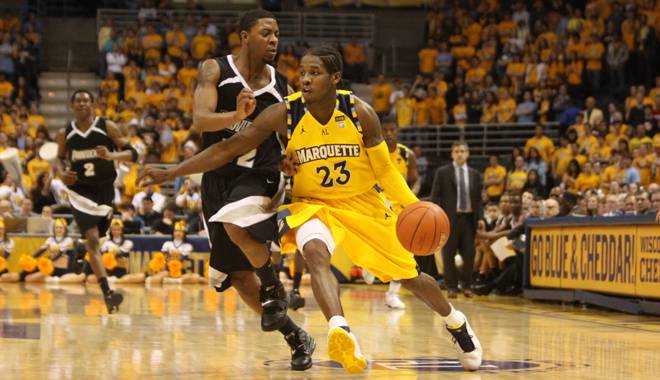 Dwight Buycks averaged over 17 points per game in the Orlando Pro Summer League.

We’re going to keep our two-part film breakdown series rolling by taking a look at Dwight Buycks, the other Marquette grad who drummed up a lot of attention with his play during the Orlando Pro Summer League.

When evaluating Buycks, it’s important to remember that he’s at a very different place in his career than Henry Ellenson is. For one, Buycks is not on an NBA contract. He went undrafted in 2011 and has since bounced around the G-League, the NBA and pro leagues in no fewer than four different countries. Ellenson is fighting for a significant role in the NBA. Buycks is fighting for any roster spot he can get.

Secondly, Buycks is 28 years old. Nobody is having the “this is the kind of player he might be someday” conversations about him that the Pistons are having about Ellenson. We know that Buycks is a gifted passer and good finisher in traffic who’s susceptible to crossovers on defense. He’ll undoubtedly keep refining his game as all players do, but the large-scale improvements you see from someone Ellenson’s age are largely off the table.

That doesn’t preclude Buycks from being effective, something he proved during his five games for the Dallas Mavericks summer league squad. He stuffed the stat sheet with 17.8 points per game, 4.2 assists per game and 2.8 steals per game, all of which were team highs. Buycks showed enough promise that the Knicks have reportedly considered signing him to an NBA contract.

Before we get into talking about the upsides and downsides of Buycks’s performance, I have to put in the same disclaimer that is in the Ellenson breakdown. While I watched as much of each game as possible, the only publicly viewable videos are highlight compilations put out by the NBA on YouTube. While these collections will contain every good play Buycks made, they’ll likely leave out the more mundane or even negative ones that could be more telling. While I tried to pick as representative of a video sample as possible, it could be skewed more toward the positive side.

Of course, there’s also the standard summer league asterisk on this performance, which is that it’s a league filled with rookies, journeyman minor leaguers and international players. It’s a big step below the level of competition in an actual NBA game. With all that said, let’s start breaking things down.

There’s one thing that stood out to me above everything else after watching Dwight Buycks’s tape and it’s the part of his game that’s most lacking. He cannot keep anyone in front of him on defense. I’ll give you two examples; just know that there are at least a dozen more where these came from.

When Canyon Barry, last year’s SEC Sixth Man of the Year, is driving past a guy like a lonely caution sign on a country road, it’s hard to imagine that same guy getting significant NBA minutes. If this were an every-once-in-awhile incident, it’d be tempting to treat it as a “you take the good with the bad” sort of thing, but this happened all the time. Even when Buycks tried to apply full-court pressure, he played too stiffly and got blown past.

He was a step slow to react on most of the dribble-drives I saw, which was especially a problem on ball screens. It’s not that unique for a guy like Buycks to have trouble dealing with screens; lots of lighter guards run into issues there. The problem is that he never seems to anticipate them. That plus his slow reaction time on defense can lead to essentially a five-on-four situation for the offense where Buycks is muscled out of the play.

The clip below is a good example. Marshall Plumlee knocks Buycks off the ball for a second, which forces the Mavs defense to cheat over to the ball side. That gives Xavier Rathan-Mayes enough space to knock down a three on the opposite wing. Although Buycks may not have directly given up a basket there, his handling of the screen started a chain reaction that led to a good shot for the opposition.

Now that the bulk of the bad stuff is out of the way, we can move on to the rest of what Dwight Buycks did, most of which was pretty impressive. One of the best things that came across on tape was an inexhaustible motor. If Buycks had the ball on offense, he was taking it into the lane. If there was a loose ball, Buycks was diving for it. Those are the kinds of things that NBA teams looking for a spark off the bench want to see in a prospective player.

Here’s my favorite example. Buycks racked up seven steals against the Knicks, most of them against fellow guard Chasson Randle, by playing like this. The hands are engaged from the outset, he anticipates Randle’s movements appropriately and then punctuates the sequence by diving for the loose ball. This is a summer league basketball game, the results of which could not possibly matter less, and Dwight Buycks is hitting the deck.

That energy certainly translates to the offensive side of the floor, where Buycks can either finish at the hoop or find open guys off the dribble-drive. One of the subtleties of Buycks’s game is how he always keeps his head up when driving to the hoop. On this particular transition, he saw Michael Gbinije collapse into the paint from the right wing. A less polished player would have kept attacking and tried to draw a foul. Buycks knew that the better play would be to find the open man created by Gbinije’s absence. That’s exactly what happened.

There were a few times in the first two games where Buycks went into the lane against rim protectors like Marshall Plumlee and got his shot swatted, so he wasn’t flawless in his decision-making. However, I found only one instance of this happening over the next three games, which indicates to me that either the first two games were anomalies or he’s a quick study when it comes to improving his play. Both of those bode well for his professional future.

Speaking of good things, Buycks is adept at utilizing both of his hands. He can move his dribble between hands fluidly while under duress and can finish at the hoop with either one of them too. When you’re an average-size guard, it helps to have as many tricks in your bag as possible for operating in crowded spaces. Buycks certainly has a few of them.

He’s also shown the capacity to modify his drives into step-back jumpers, which is another useful tool for getting around big guys in the lane.

Buycks is an inconsistent long-range shooter at best, only putting up a 29.2 percentage from beyond the arc. He occasionally has a tendency to lean back on his long-range shots and let his back foot hit the floor before his front, which can cause some misfires. That said, he can also be a classic “heat check” shooter that gets going at a moment’s notice.

This is precisely what he did down the stretch of the Mavs’ victory over Henry Ellenson’s Pistons in the final game. Buycks erupted for 28 of the Mavericks’ 83 points. While Ellenson was barely noticeable in that game, Buycks elevated his skillset when it mattered most. That’s the difference between a lot of the younger players and Buycks, who has been making a living off basketball for six years and has undoubtedly been in these situations before.

Granted, Buycks definitely fell into playing hero ball in that game, taking 26 of the Mavs’ 65 shots and only hitting on 11 of them. It would be pretty easy to tsk-tsk Buycks for some of the contested shots that he took down the stretch, were it not for the fact that they went in.

It’s possible that Buycks will have an NBA future. His hustle and attacking instincts would make him really fun to watch at the next level. In fact, the last time he was in the NBA with the Lakers, we got treated to this highlight.

In the end, though, I just can’t get over how lacking the on-ball defense was. Buycks bit on a ton of dribble moves, didn’t move with enough lateral quickness and too often left the other four players on the floor in a position where they had to frantically cover for him. As good as he was besides that, it’s going to be an intractable problem if Buycks makes his way on to an NBA roster.