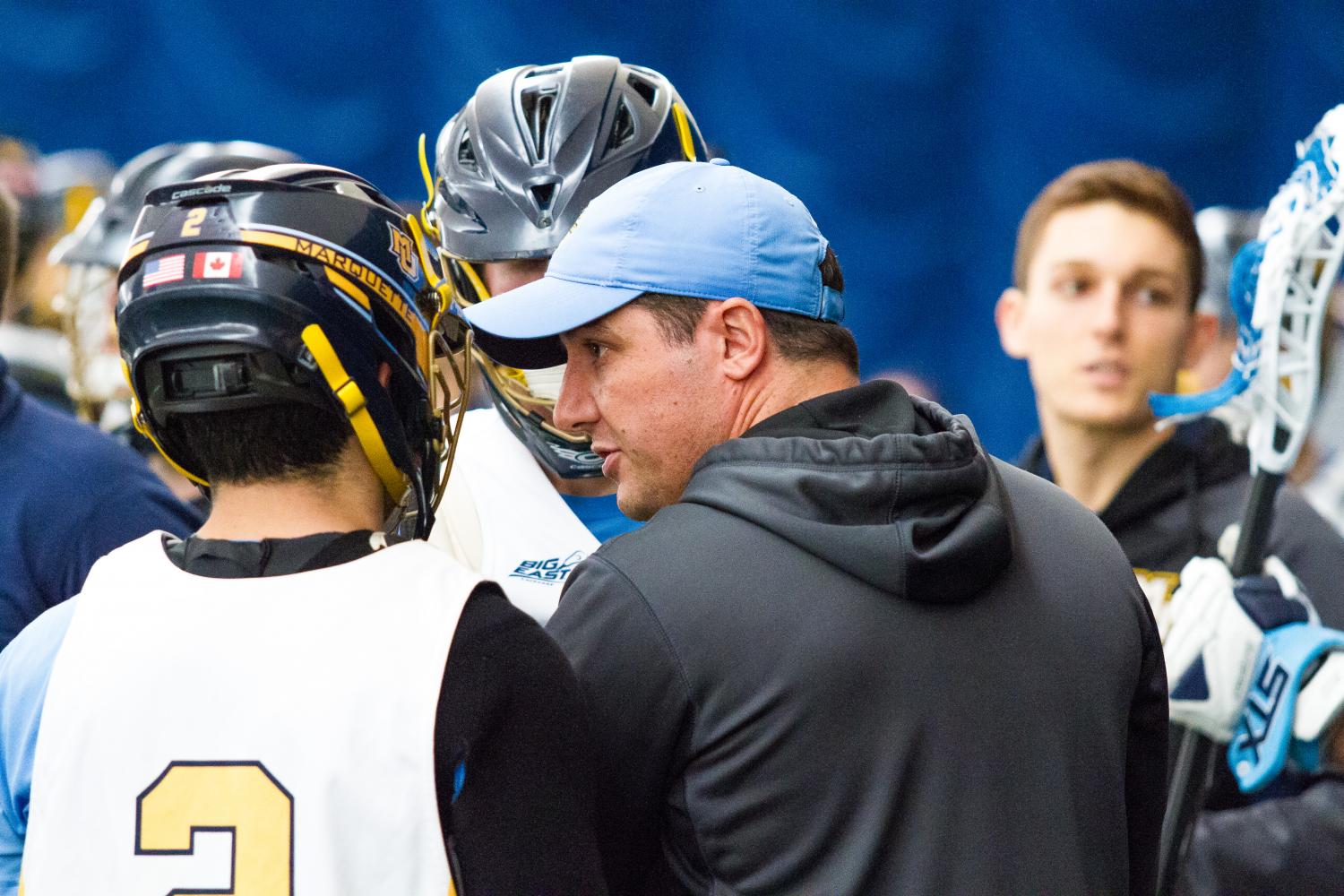 Joe Amplo decided the relationships at Marquette were too important to leave.

Between getting courted by Michigan and seeing two of his players drafted into the pros, men’s lacrosse head coach Joe Amplo has had an active offseason even before the nonstop recruiting trips are factored in. Somewhere between all of that activity, he found the time to talk to the Wire about his summer plans, the Michigan job offer and why he didn’t take it, among other topics.

The following transcript has been lightly edited for brevity, clarity and continuity.
Q: Have you interacted with Ryan (McNamara) and Andy (DeMichiei) since they got drafted? Did you call them and if so, what did you say?
A: Yeah, I just texted them and told them, “You guys never cease to amaze me.” They’re overachievers, you know, and those are two kids who believe in themselves and bought into the process. Now they have another feather in their cap to kind of cap off their (college) career.

Q: As you move ahead, do you think there’s anybody on the current roster that could be the next Marquette player to go to the pros?
A: It’s hard to say, you know, it’s a really tough league to crack. Really, you don’t know what the MLL needs. I think this year was a midfield-driven kind of draft … so next year it may be defensemen or goalies. I think any one of our seniors next year… you know I look at a guy like (midfielder) Colin Riehl or (goalie) Cole Blazer or our faceoff guy Zachary Melillo who have had an impact. They’ll certainly be considered.

Q: I want to talk about the Michigan job. Did you think the interest on their part was pretty immediate? How far along in the process were you, if you’re allowed to say?
A: You know, it’s interesting. Their process kind of moved very slowly, and it was the biggest mystery in our sport, what they were going to do. I think they had a lot of other things going on spring sport-wise on campus, so they were pretty deliberate about their approach.

Q: You mentioned that Michigan has other spring sports and Marquette obviously only has lacrosse as the big spectator sport. I was talking with some other people in the Wire, and we speculated that that might have been a factor in why you stayed: that lacrosse was sort of the big-ticket item at Marquette in the spring. Was that a factor?
A: Well it’s tough to say that exactly. I think at the end of the day my biggest factor was that this is a place that believes in me, and I can be the best version of myself within this community. That’s something that’s really important to me. Relationships are a driving force to who we are as a program and who I want to be as a coach. I just put more value in the relationships that I have here at Marquette … I thought that I’d want to consider something different, but it became pretty obvious as the process drew on that this is a better option for me and my family.

Q: I also wanted to ask about your family because I imagine that every year you spend in Milwaukee, you lay down deeper roots here as members of your family form friendships and that sort of thing. As you spend more time at Marquette, does it get less and less likely that you’ll leave because of that?
A: That’s one of the biggest factors. My family has roots here, my children are extremely happy, my wife and I enjoy where we live and the people we’ve met and the relationships we’ve made. This is our home.

But the biggest thing for me was my professional satisfaction was completely taken care of here, you know? We compete at a high level, we’re committing to the sport more and more as the years go on and this situation here is only going to get better. I’m proud of what we’ve done, but I’m more excited about what we’re going to do. To me it wasn’t worth walking away from that. I couldn’t. I just couldn’t walk away from the people that have been so good to me and the place that gave me a chance.

Q: Switching gears a bit, I know summer is a hot time for recruiting in other sports, like basketball. Is it the same in lacrosse? It this a really active recruiting time for you?
A: It is. From now until July 30 we’re pretty much on the road every day. I’m on campus today because we have some camps going on, but one of my assistants is on the road, and I’ll be out tomorrow. With the change in legislation, it’s a little bit different of a process; it’s just kind of an evaluation mode right now. That’ll go on until July 30, we’ll take a little breather in August and then get started again in September with our team.

Q: Lastly, could you give me a sense of which freshmen on next year’s team I need to pay extra attention to?
A: Next year’s class has got tremendous potential; it’s as talented as we’ve had. There’s a young man by the name of Garrett Moya; he’s a big attackman from Huntington North (New York) that we’re really excited about. Keaton Thomson is another one — he’s Tanner Thomson’s younger brother. Kyle Koch, a defenseman from Loyola Academy down in Chicago, he’s a guy that’s gonna push for time right away.

There are a few others that are excellent but those are the three guys that I think have the most potential just out of the gates. I wouldn’t be surprised if there are others that step up and take charge early in their careers as well.