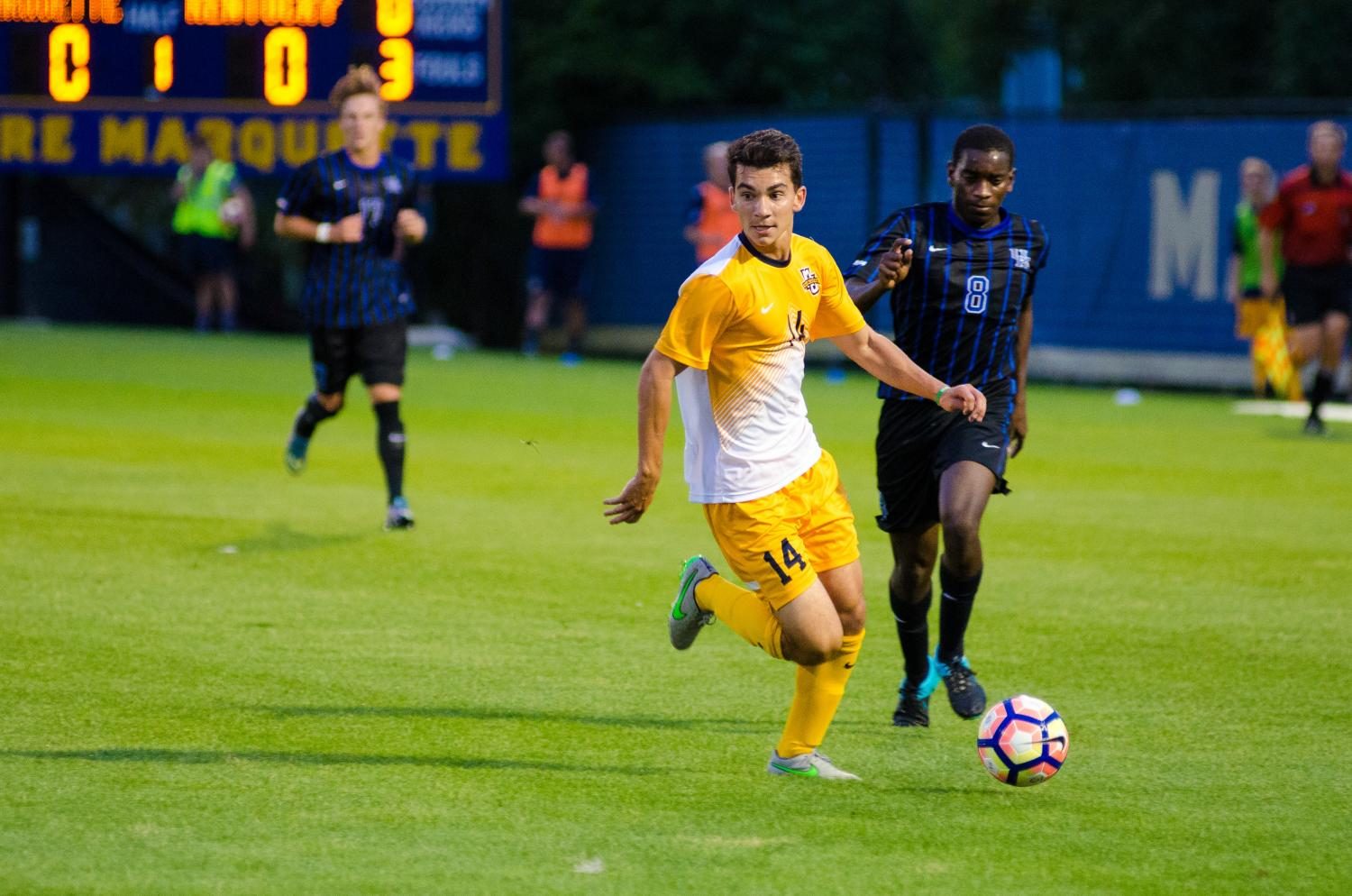 Marquette will get another shot at Kentucky this year, along with a host of other NCAA College Cup qualifiers.

Marquette men’s soccer announced its 2017 schedule today. The schedule includes seven home games at Valley Fields and matches against seven teams that qualified for the NCAA Tournament. Some of those are against college soccer blue-bloods Virginia, New Mexico and Saint Louis.

The preseason begins August 11th with the annual Blue & Gold scrimmage. Forty-eight hours later on Aug. 13, the Golden Eagles will host in-state rival UW-Green Bay for their first exhibition match. That will be followed by a trip to Loyola-Chicago for the latter exhibition match Aug. 19.

Six days later, the regular season kicks off on the road at Kentucky, which brushed Marquette aside 4-0 in the season opener last year at Valley Fields.

Head coach Louis Bennett told GoMarquette.com that he spent a lot of time working on the schedule in order to get the best out of his lineup at the most appropriate time. Bennett, who is in his 12th year leading the Blue & Gold, also said recovery time is going to be a big factor.

“I’m very pleased that we were able to schedule ample recovery time between games as we have at least two days between games and even more during BIG EAST play,” Bennett said.

The Golden Eagles host their first home game Sept. 1 at Valley Fields against Illinois-Chicago, where Marquette fanned the Flames 4-1 on the road last season.

Things don’t get any easier from there as Marquette goes on the road the week of Sept. 12 to face Virginia in Charlottesville. This will be the first time Marquette will play the Cavaliers since 2013, when UVA ended the Golden Eagles’ deepest NCAA Tournament run in the Sweet Sixteen.

The squad will then head north to Philadelphia that weekend and square off against Villanova in the BIG EAST opener. Nova’s Jacob Anderson scored two late goals to knock off Marquette in a key conference home game last year. Marquette will have to wait until Sept. 23 for the BIG EAST home opener against Seton Hall.

Tuesday, Sept. 26 will mark a break from conference play for the 45th Milwaukee Cup, as the Golden Eagles will travel to cross-town rivals UW-Milwaukee for their annual derby. Fellow in-state rival UW-Madison will also take a swing at Marquette in Madison on Oct. 4. Last year, the Golden Eagles went 0-1-1 against their rivals, tying Milwaukee and losing 1-0 to the Badgers.

The BIG EAST slate includes road tests at Georgetown, St. John’s and Xavier. The Golden Eagles will conclude their regular season home matches with difficult back-to-back dates against Creighton and Butler. A road fixture against DePaul Nov. 2 will conclude the schedule.

All of this leads up to the BIG EAST Tournament from Nov. 5-12. Marquette failed to qualify for last two tournaments after qualifying for the previous six.