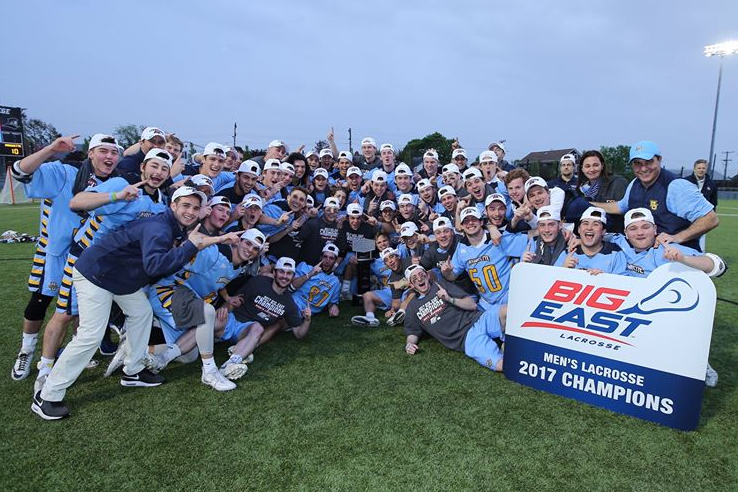 Marquette men’s lacrosse is going back to the NCAA Tournament.

The Golden Eagles narrowly held Saturday against Providence, defeating the Friars 10-9 to earn a second straight BIG EAST Tournament championship. With the victory Marquette earns an automatic bid for the tournament and will learn its fate at 8 p.m. tonight on ESPNU.

After scoring three straight goals, Marquette looked to be in the driver’s seat with two minutes remaining. Ryan McNamara scored his 100th career goal and the eventual game winner with four minutes left in regulation to make it 10-7, and the Golden Eagles were able to kill half the remaining time off the clock. However, Providence didn’t back down, as Ryan Schaffer scored two goals 19 seconds apart to make it a one-goal game with 1:25 left.

Providence had an outstanding opportunity to force overtime, earning possession and a man-up opportunity with 33 seconds to work with. Unfortunately for the Friars, Ryan Nawrocki wasn’t able to get a handle of the ball off a pass while cutting from behind the net. The ball rolled into the crease, allowing goalie Cole Blazer to snag it and run out the clock in the corner of the field.

“When we had nine, I said to our offensive coordinator Stephen Brundage, ‘I really think we need 10,'” head coach Joe Amplo said. “Those guys, they fight so hard. Providence plays so damn hard. They were going to make plays down the stretch to make it close.”

“There was never a moment when I thought we were going to win the game, truthfully, until there was about three seconds left,” Amplo said.

The stressful final moments brought back memories for Blazer, who was named the tournament’s Most Valuable Player. He made 11 saves against the Friars and was focused even after getting stitches on his chin during halftime.

“That last minute, it felt like we were back in Denver,” Blazer said. “Powerhouse offense, that was going through my mind. I trusted my defense, I trusted my ability and our ability and I trusted the flow of the game and the experience that we had from last year to be able to pull it out again.”

The Golden Eagles did their damage in the second frame of each half. After going down 2-0 after the first quarter, Marquette outscored the Friars 4-1 in the second quarter to take a 4-3 lead into the locker room. Providence struck back in the third quarter, getting three goals to Marquette’s one in the first five minutes of the frame to reclaim the lead, 6-5.

The Golden Eagles scored five of the next six tallies, putting them in the 10-7 spot which appeared so safe.

McNamara, Grant Preisler and Tanner Thomson each scored a pair for the Golden Eagles. Joe Dunn, Andy DeMichiei, Griffin Connor and Kyran Clarke rounded out the scoring with one apiece.

Marquette completed the ascent from fourth seed to BIG EAST Tournament champions by downing the top-seeded Denver Pioneers and third-seeded Providence Friars. With Marquette’s regular season resume, sitting at 6-7 coming into the tournament, winning it all was the only way the Golden Eagles would make the NCAAs. As the team puts it, they had their backs against the wall.