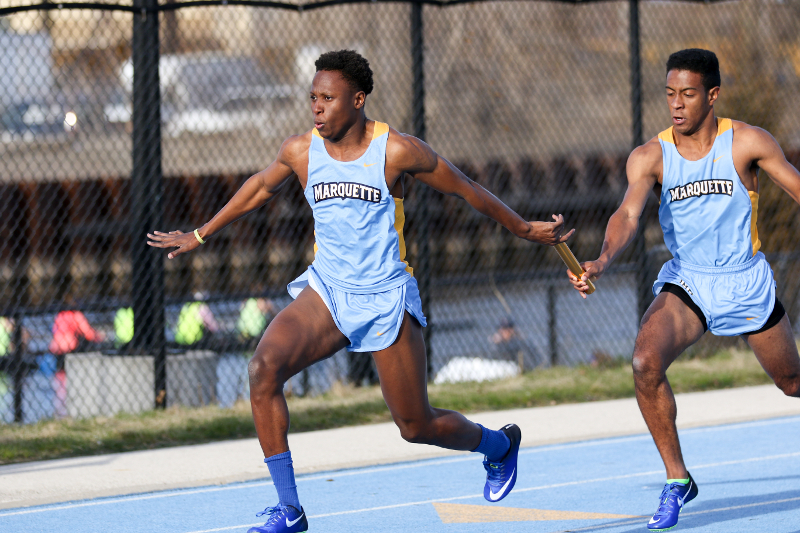 Josh Word passes the baton to Jay Whalen at the Marquette Duals.

It’s no secret that this has been a historic season for the Marquette track and field team, but no group has been as hot as a group of four men’s sprinters.

For three consecutive meets, the men’s 4×100 team has set the school record. The most recent was a 40.96 finish at the Pacific Coast Invite at Long Beach State.

The squad consists of two sophomores, one junior and one senior, and, together, they are trying to make the NCAA regionals, a goal that has been a long time coming.

Josh Word is the leadoff man in the squad. It’s his job to get the team off to a good start from the moment the gun goes off. The junior is an experienced member of the team, and was part of the record-setting quad last year that also broke school records.

“Every week, we are happy that we break a new record, but we know we’re not content,” Word said, “We’re always looking forward for what we need to improve on, and so it’s bittersweet knowing that we just broke a record, but we have to get back there next week and try and beat it again.”

“Coming together right before a big race, we circle up and we say our pregame prayer. From that moment on, it feels like we are the only ones on the track,” Word continued. “It’s just us four, no one else, and all of our problems go out the door, and we just focus on bettering ourselves for that race.”

Next taking the baton is Jay Whalen, a sophomore from Newark, Delaware. He’s the newest member. Last year, he was injured for a good portion of the season and was not expecting to run on the squad when he came back. He was able to prove himself and has been a key part to the relay.

“Coming off of injury, I wasn’t expecting to jump into the 4×100 right away, but the opportunity to even be on it with these guys has been great,” Whalen said. “We all hang out with each other and we talk about the relay in addition to regular life, and we can talk about the relay and our goals and aspirations as we move forward. We want to make [NCAA] regionals, and we’re in a position where we can.”

The third member of the relay squad is sophomore Connor Boos. He’s the dad of the bunch. According to teammate Brandon Bell, he always keeps the team in line and focused on their goal of making the NCAA regional.

Boos already knows the time needed in order to get down to Texas for the regionals — 40.50 seconds. They’ve done it before in practice, but Boos knows they are close to the cutoff.

“When it comes down to it, anything below 40.40 seconds should get us a spot,” Boos said. “We’ve still got so much room for improvement, and we’re just going to keep getting faster. So the sky is the limit, at this point.”

Bell, a senior, is the fourth member of the squad, and he understands they are in uncharted waters. This is a far cry from his freshman year, when he was just one of three true sprinters on the team. The pieces of the puzzle have come together to align for a stellar senior season.

“Each year though, someone came and we gradually improved,” Bell said. “Each year we saw progression … When we started breaking those records, at first it was unbelievable, and then we just kept breaking them. We’ve gotten so mature now, and when we break a record, we don’t overreact like we use to. We understand the amount of work and time that we put in to get to where we are today.”