Students and faculty march for science 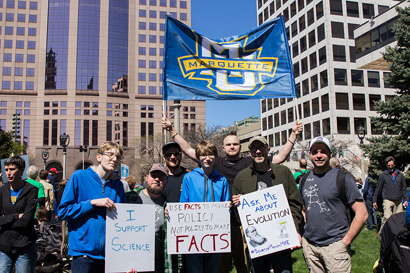 Proudly carrying Marquette flags and cleverly-phrased signs, a group of Marquette employees and students attended the March for Science in Milwaukee Saturday afternoon. The group consisted of professors in the science departments, undergraduate and graduate students, other employees and their friends and children.

At least 3,000 people came to the march, according to preliminary numbers provided by March for Science Milwaukee event organizers. The march took place in cities across the United States.

Demonstrators marched for 11 blocks, starting at Red Arrow Park and looping around at 6th Street by the Milwaukee County Courthouse.

The movement was formed to protest against actual and suggested cuts to scientific research and education funding by President Donald Trump, as well as protesting against groups that deny climate change.

“We’re out here to protest the cutting of research and education funds,” Edward Blumenthal, chair of the Department of Biological Sciences, said. “As both researchers and teachers, faculty here at Marquette can really take a hit with the loss of funding to both of those areas.”

Blumenthal and the other scientists in attendance expressed their concerns for the future of science if money for research goes away. “Funding science is at the core of the education system, and when the funding erodes, so will the system,” Blumenthal said.

John Mantsch, chair of the Department of Biomedical Sciences, said this does not just affect researchers and teachers.

“It’s especially scary for young people, who need grants and funding to get their own research projects started,” Mantsch said.

Many of the students at the march shared that fear.

“Science is the bread and butter of advancements, and Trump wants to make cuts to programs that we need to keep this country moving forward,” Elliot Corless, a graduate biochemistry student, said.

Many protesters carried signs with anti-Trump sentiments, saying things like, “Fund More-A-Science, Less A-Lago.” Everyone cheered when march leaders called over the loudspeakers for increased funding.

“A loss of funding will mean a lot of lost opportunities and lost jobs, which will damage the economy for everyone,” Blumenthal said.

Mantsch said scientific advancements also play a large role in the U.S. economy. “Funding for business innovations and medical technology goes right back into the economy,” he said. “We’re finding solutions to the world’s problems and it’s good for the economy.”

While there was a lot of anti-Trump sentiment at the march, Stacia Peiffer-Schneider, the laboratory supervisor for the Department of Biological Sciences, stressed it should not be a partisan issue.

“We’re here to support science, to support facts,” she said. “The true facts, not just what’s convenient. Facts don’t belong to one party.”