Take a Stroll In My Scarf 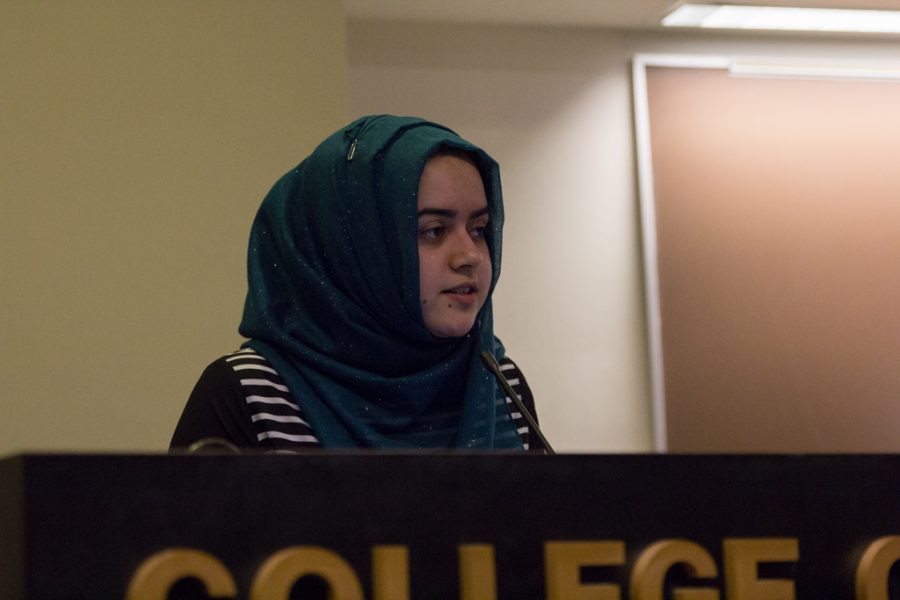 "Take a Stroll In My Scarf" brought mixed reactions from participants and bystanders when it was held last week by the Muslim Student Association as part of Islam Awareness Week. Photo via Andrew Himmelberg andrew.himmelberg@marquette.edu

The event, Take a Stroll In My Scarf brought mixed reactions from participants and bystanders when it was held last week by the Muslim Student Association as part of Islam Awareness Week.

“Nobody cares if I wear a hat to class or if I wear shorts or a weird shirt, why should they care if I’m wearing a scarf on my head?” Lili Jaeger, a freshman in the College of Arts & Sciences, said.

The event aimed to have non-Muslim students wear a hijab for a day, in an effort to have them gain insight into the experiences of Muslim students on campus and to raise visibility.

“I wanted to support them and all Muslim women on campus by pushing my own boundaries and trying something new,” Jaeger said.

Enaya Othman, a Muslim professor who teaches Arabic and chooses not to wear a hijab, said events like this are an opportunity for discussion and unity among different faiths.

“It is an attempt to normalize it and contest misconceptions and widespread stereotypes about Muslim women’s dress,” Othman said.

Anyia Maheen, one of the event organizers and a junior in the College of Health Sciences, said the event was meant to encourage a more diverse and welcoming Marquette.

“With the current political unrest, we wanted people to get used to seeing Muslim women, learn to accept us and not discriminate against us,” she said.

Maheen said they wanted to give everyone a chance to experience what a hijabi girl does.

Brenda Brambila, a senior in the College of Arts & Sciences, said she participated because she has a few friends that are part of the Muslim Student Association.

“I wanted to show my support,” she said. “I also wanted to know how it was to cover myself and see if people treated me differently. It allowed me to see how differently the world sees them.”

Not everyone had the same enthusiasm, though they agreed the event had good intentions.

Ibtisam Abujad is a visiting Arabic instructor who is Muslim and chooses to wear a hijab. She said the event did shed light on the widespread marginalization of Muslim women, but that the understanding of modesty among Muslims is not only tied to womanhood.

“Muslim bodies are not just women’s bodies,” Abuja said. “Women’s bodies have become the site of debates on religion, ethnicity and politics, either to suppress, idealize or fetishize. This event, I believe, is intended to promote inclusivity and empower women, not just Muslim women, to reclaim their own bodies, but one needs to be careful not to fall into the aforementioned dangerous pattern.”

Some students thought the event was a good idea, but did not feel comfortable participating themselves.

“I think because it was promoted by Muslim students to promote understanding and conversation, it was a positive event and okay,” Audrey Lodes, a sophomore in the College of Arts & Sciences, said. “I feel like it is a commitment and had become a part of many Muslim women’s identities and that it should be only worn when you understand the culture and religion around it.”

Others changed their minds.

“At first that is what I thought too, because I’m not part of the culture and didn’t want to mimic or mock it, but they were inviting me into it and offering,” Melanie Hernandez, a sophomore in the College of Arts & Sciences, said. “It’s something the Muslim community was using to try and open peoples eyes to their experiences.”