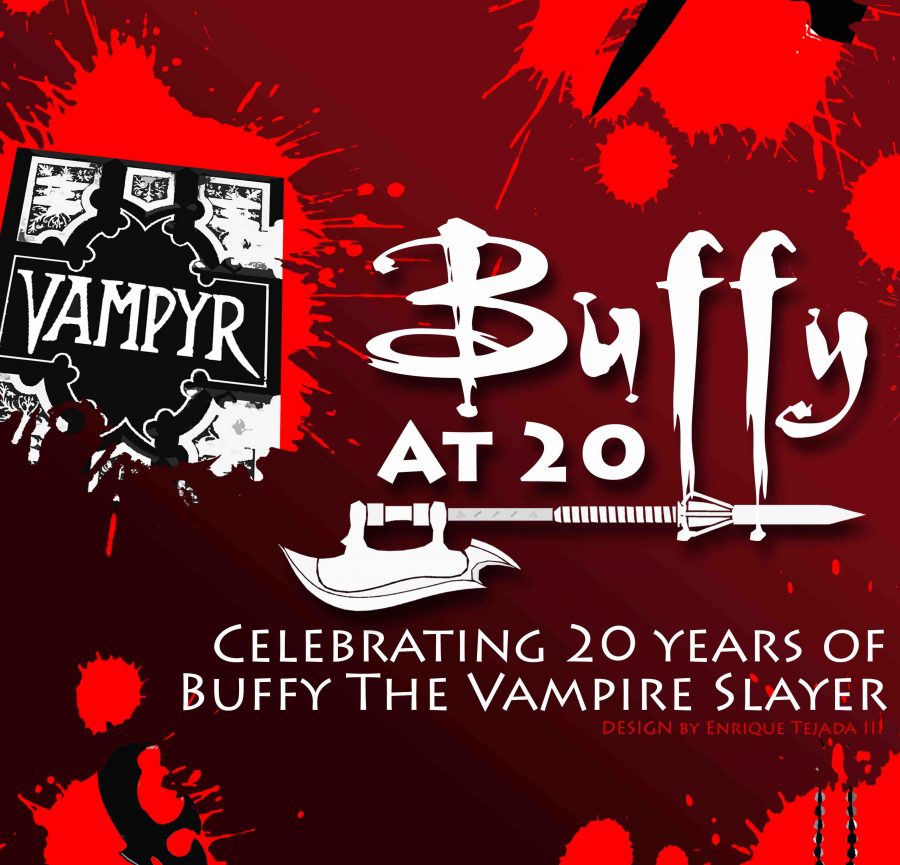 James South, associate professor of philosophy at Marquette, hasn’t always loved television. In fact, his typical night at home was spent in a lethargic state, flipping through channels and zoning out before falling asleep.

He was a casual viewer until a recommendation from a colleague and trusted friend when he indulged in one show that stymied his lethargy and forced him to wake up: “Buffy the Vampire Slayer.”

Twenty years, two books and many studies later, South still has so much passion for “Buffy” that he, along with assistant English professor and well-known media scholar Gerry Canavan, held a “Buffy at 20” conference on Saturday, April 1.

“It occurred to me late last summer it would be the 20th anniversary, so I started (asking) around to see if there were any conferences planned for this,” South said. “I wasn’t going to let this occasion go unmarked. (‘Buffy’) had such an effect on me.”

Despite the date, the conference was no April Fool’s joke. Even though it might seem odd for a professor to be so invested in using a show that revolves around the life of a petite, blonde teenage girl in the world of academia, his passion for the show is far from alienating.

According to a 2012 study by slate.com, “Buffy” had over 200 academic studies done about the show, whereas “Alien,” second on the list, had an impressive, but measly amount done in comparison: 86.

The conference is far from the first of its type. Every even year, Slayage, an online journal dedicated to the show’s director, Joss Whedon, holds a mega conference. Though “Buffy” ended in 2003 and takes a back seat to some of Whedon’s more recent work like “The Avengers,” the classic still has a strong foothold.

“’Buffy’ set a precedent,” South said. “It can be approached from so many different angles — philosophy, film studies, communication, etc. — and because of its consistent vision, it’s something academics could really work with.”

Further, “Buffy,” debuting one of the first strong female leads, touches heavily on feminism, sexuality, sexual violence and complex metaphors for high school. Filled with vampires, werewolves and zombies, the Buffyverse is portrayed as a realistic hell.

“High school being hell: it touches a lot of people,” Canavan said. “Especially people who wind up being in academics. Maybe they were picked on … that kind of dysfunction obsession that drives someone to be an academic.”

Even more oddball topics like trauma and “Buffy” as soul food were discussed at the conference, which was originally planned as a three panel streamline event with a maximum of 75 onlookers.

“We planned it for the Eisenberg reading room, but when we started getting emails asking how (many) people could attend … we knew that tiny room couldn’t hold it,” South said. “We kept moving up until we found a place big enough, which ended up being the AMU ballroom.”

Before it was all said and done, they added an extra panel, had an incredible line of speakers from California to Canada and enough information to put together a special edition for Slayage.

The success speaks not only to the community, but to Whedon and the resonance his show still holds today.

“You see ‘Buffy’ in the DNA of (HBO’s) Westworld or these other shows using the ‘Buffy’ model of a primary hero and a supporting ‘Scooby Gang,’” Canavan said. “Language of a season arc and a big bad, that’s all from ‘Buffy.’”

It’s the reason the community remains stalwart, but there are questions starting to pop up regarding the overall lifespan of the show.

“Why ‘Buffy’? Why so much?” Canavan said. “’Buffy at 20′ means a college freshman is two years younger than the series. Where is the moment when something goes away or becomes history?”

This is an interesting conundrum, one that was raised at the conference, but neither Canavan nor South can predict the exact date of demise for ‘Buffy’. However, both are positive it won’t drift away any time in the near future.

“I think it has some more time, especially with Whedon becoming such a prominent director and culture force,” Canavan said.

Both professors acknowledge the large impact the series has had on their lives and careers.

“I still teach and research medieval philosophy: what I came to Marquette to do,” South said. “But, this expanded the possibilities and gave me opportunities I would otherwise not have had. It’s something I never would have predicted when someone said, ‘Hey, you should watch “Buffy.”‘”

Nowadays, instead of a casual viewer, South is the one convincing colleagues to give TV shows a try, and maybe he can inspire the same life-changing passion “Buffy” inspired in him.