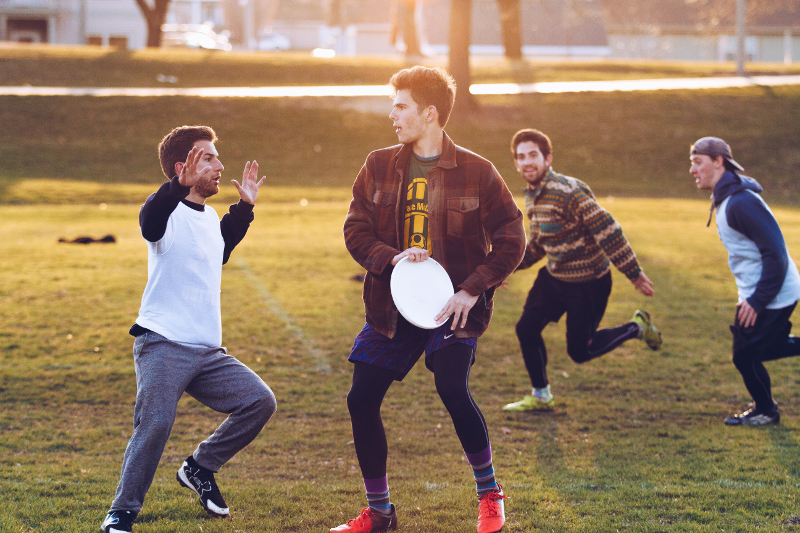 Welcome to the Marquette Birdhouse: an eccentric, often outlandish group of professional oddballs who have taken the world of Ultimate Frisbee by storm, and this spring, for the first time in program history, they’re ranked in the top 100 nationally and ready to make a deep run into the postseason.

There are many funky aspects to this team. Their raucous in-game dedication, chanting things like, “Lettuce, tomato, we go HAM,” singing their warm-up song “The Monster Mash,” and sporting a pair of dueling man buns. But ask anyone, and they’ll admit the strangest thing to happen this year is their success.

“We were calling it a development year,” Zach Thompson, the Birdhouse president, said. “We didn’t expect to move on from conferences and get a regionals bid … but now, it’d be a disappointment if we didn’t.”

Those initial expectations stemmed from losing nine of their 14 top players from one of their most successful teams in program history. Marquette had 20 glaring open roster spots to fill for fall 2016. In fact, when the 14 returning players met over Labor Day weekend, they questioned the future of the team, planned an easier spring schedule and worried about a potentially drastic culture shift. But, a seemingly out of nowhere influx of 20 talented, mostly freshman faces changed everything.

“It’s been an impressive level of aptitude from our freshman class,” Thompson said. “Having that youth to rely on when the top lines get tired and knowing we have confidence in these young players has meant a lot in tournaments.”

However, Andrew Galgan, a freshman and rising star on the team, said the newcomers couldn’t have done this alone.

“The reason for our success has to go to the vets,” Galgan said. “Some of it is the younger guys’ work ethic, but we can’t be successful without the older guys.”

One of those vets and a main concocter for a variety of the team’s outlandish ideas is senior captain Wyatt Meyer, who for four long years considered himself a curse.

“Every tournament I didn’t go to freshman year, we won,” Meyer said.

It was the same story his sophomore year and then his junior year abroad, but finally, during the last tournament of his career, they pulled off a dominating clean sweep of the Illinois Invite and claimed a title.

“I cracked a big smile, grabbed a teammate, and said, ‘We’re champions man,’” he said. “But, the great aspect of Birdhouse is that the team isn’t really focused on winning, we’re just having a great time together.”

It’s an idea that’s on the tip of everybody’s tongue — spirit of the game — but it doesn’t just stem from this bunch of cooky birds. It’s a staple born and bred in the Ultimate community.

“There’s no refs; you call things yourself,” freshman Daniel Whipple said. “There’s a lot of camaraderie. You’re not really against the other team; it’s more about bringing your team up.”

“The funny thing about the Illinois Invite, when everyone talked about their favorite moment of the weekend, nobody actually named winning,” Meyer said. “It speaks volumes to our team. We’re here for Frisbee, and we’re here for each other. Winning is fun, but the team is about so much more than that.”

At the end of the day, all 33 members love their flock of Birdhouse brothers, love the game and embrace their famous oddball persona that has caused opponents to sit up and notice.

“The team really makes you feel relaxed,” Thompson said. “With our motto, ‘house is home,’ there are no cliques, and everyone feels like equals. … When introverts get together and become close, it seems to draw them out.”

Winning isn’t the subject, but nobody would argue it isn’t a nice aside to the great culture of the squad. And, with the core of young talent, their current and future sights are set somewhere short of the moon.

“Honestly, I want to be in the conversation of getting a nationals bid in our region,” freshman Jack Drolen said. “That’s my number one goal in my career.”

Galgan is on the same page.

“We have unlimited potential, especially with the guys we have coming back,” he said. “There’s a good future in store for Birdhouse.”