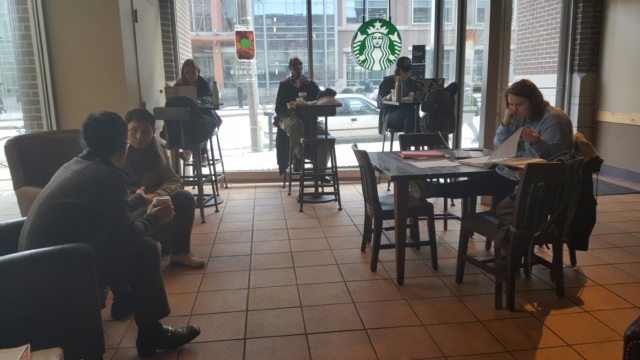 The Milwaukee County Coroner’s Office identified the woman as Beverly Griffin. Griffin worked as a Marquette custodian from 2002-’11.

Though an autopsy has yet to be conducted, the medical examiner declared the cause of death to be of natural causes due to heart disease.

Lt. Joe Erwin with the Marquette University Police Department was at the scene. He said Griffin was found with no pulse.

According to the investigation report, Starbucks staff stated that Griffin was a regular customer, coming in daily, and that her behavior was unusual on Tuesday. They said that she ordered a cold water instead of her usual hot water and did not look well.

“She hobbled in and sat across from me and coughed a few times and was kind of crying,” Paige McDonald, a senior in the College of Communication, said. ” The woman then appeared to fall asleep, but that was not the case,” she said.

McDonald said she felt the need to stay with the woman, “I couldn’t leave because I felt obligated to be the person that was there solely for her, because nobody else was.”

The incident caused the Starbucks to shut down for several hours. An ambulance was called, but Griffin was deceased by the time it arrived.

Starbucks manager Ashlyn Hemmerle said, “The staff quickly got rid of everybody and followed our protocol for this sort of thing.”

The Medical Examiner’s Office contacted Griffin’s sister Gloria Weatherall about the death. Weatherall said her sister “became depressed and closed off about five years ago when (their) mother died from cancer.” Griffin then quit her job and has been homeless since.

Weatherall said she and Griffin’s son Angelo Griffin will make funeral arrangements within a few days.

The university declined to comment at this time, referring all questions to MUPD, who is conducting the investigation.

Matthew Martinez and Camille Paul contributed to this story.