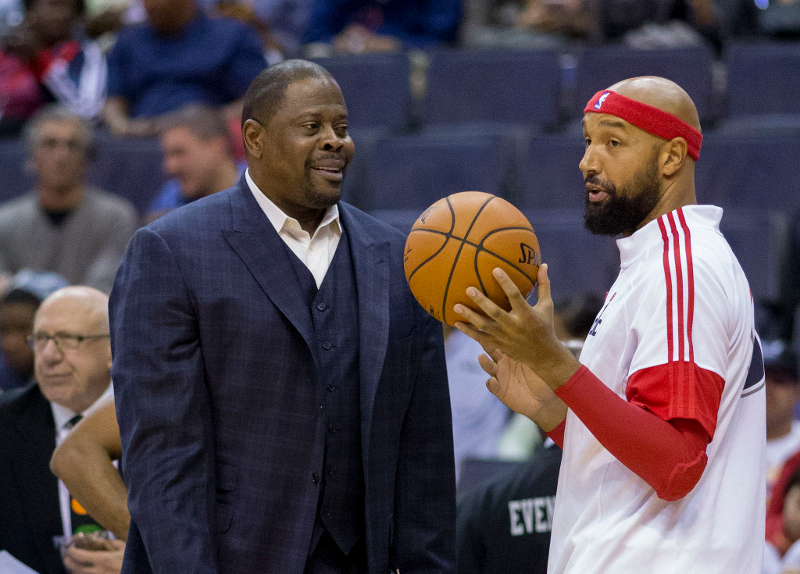 Patrick Ewing stands on the sideline while serving as an NBA assistant coach.

When Georgetown tapped Patrick Ewing as its next head coach yesterday afternoon, it created a splash as big as the 7-foot, 240 lbs. former center would make cannon-balling into a pool.

With multiple other coaches already turning down the job, including Xavier’s Chris Mack, Ewing was by far the biggest name tied to the legendary program. He is Georgetown’s most famous basketball alumnus, an NCAA champion with the school in 1984. He was taken first overall in the NBA Draft by the New York Knicks and went on to have a Hall of Fame career.

He will immediately be one of the most marketable coaches in college basketball, both for television and getting in the door with recruits. Who is going to say no to talking to Ewing?

It’d be easy to focus on Ewing as a celebrity, the former player who was an instrumental member of the Dream Team. On the surface, this could be viewed as an underachieving program looking to boost morale by hiring someone already beloved by its fan base, or someone former coach John Thompson Jr., who is an incredibly powerful figure in the program, approves.

All of that diminishes what Ewing has done as a coach.

Ewing has served as an NBA assistant coach since 2002 and has been on Steve Clifford’s staff in Charlotte since 2013. He is the Hornets’ associate head coach, has coached the team on multiple occasions in summer league and has been a candidate for NBA coaching jobs. He most recently was a finalist for the Sacramento Kings’ opening this summer.

“I think that he’s attacked the coaching profession in the same work manner that made him so successful as a player,” Clifford said to The Vertical Monday. “He’s a nuts and bolts coach, detail-oriented and constantly looking for ways to make himself better. He’s going be a big loss here.”

“Very few who have been a top-50 player of all time has ever invested more into a second career than Patrick has into coaching,” Jeff Van Gundy, who coached Ewing on the Knicks, said to The Vertical.

He’s gone through the grind at the NBA level but never got an NBA head coaching opportunity despite being well thought of as an assistant. Both Thompson and Ewing said it could be because the general perception of centers as simply physically dominant players.

“He’s a smart player. He’s a great leader. But you very seldom hear intelligence associated with height in the NBA or in college. Therefore, they think that the people who are thinking on the floor all the time are guards. Patrick is suffering from that,” Thompson Jr. said to The Washington Post in 2015.

His big break is coming at a new level, and The Vertical’s Adrian Wojnarowski reported Ewing has already studied all the requirements of running a college basketball program in preparation for this job.

Ewing’s fame will obviously have its benefits. Look at what Chris Mullin has been able to do in recruiting at St. John’s, despite never coaching before taking over in 2015. Ewing combined that acclaim with high-level coaching history, which should keep Georgetown fans optimistic.