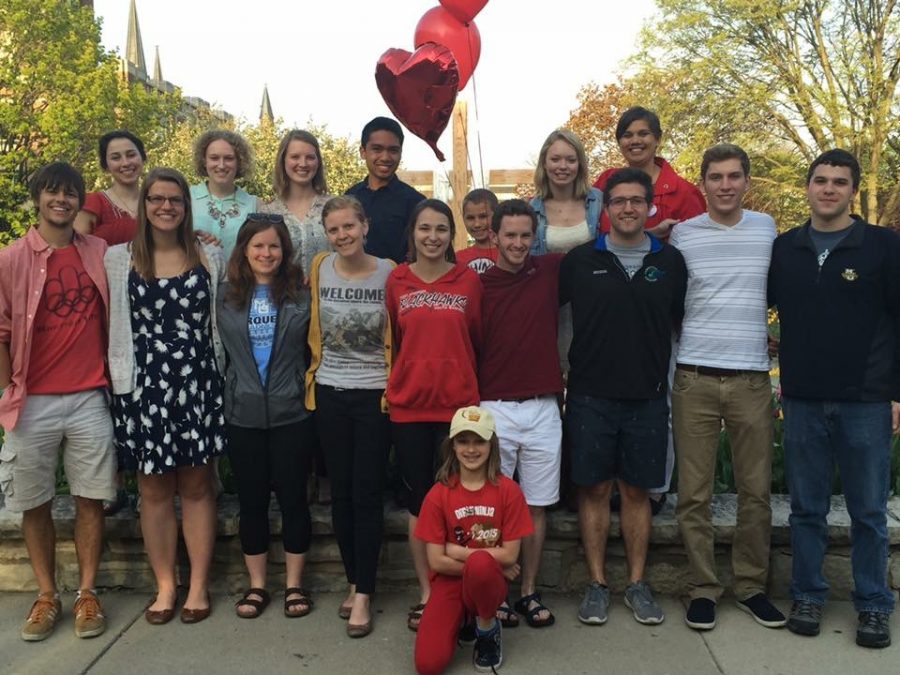 Lutheran Christian Ministry is one of the religious groups affiliated with Campus Ministry, which supports unity for Christian believers and interfaith dialogue between religious groups. Photo via Yana Rawinski

“No one can open them, because that’s past business hours,” she said, adding no one knew why the doors were locked.

Short, the director of LCM, made the best of it — she didn’t complain. The group moved outdoors, eating together as usual.

Locked doors aren’t new for Short, who’s served as the part-time Lutheran pastor on campus for nine years. Every year, LCM files a request for a weekly time slot in a study room. She said the study room was unavailable about six times this year, and locked without warning about three other occasions.

When the room isn’t available, LCM gathers at restaurants, coffee shops or student apartments. They are never in a space they call solely their own.

On the surface, the issue appears to be related to space, but Short said it’s begun to symbolize something more: the lack of a voice, especially in the relationship between religious groups on campus.

LCM is one of the religious groups affiliated with Marquette Campus Ministry, which supports unity for Christian believers and interfaith dialogue between religious groups. It includes Cru, Hillel Milwaukee, InterVarsity Christian Fellowship, LCM and Orthodox Church in America.

They share a small office in Campus Ministry. Short does not keep her supplies — including the Crock-Pot — in the office, citing that she doesn’t want to take space from others. LCM does not put anything in the office symbolizing their group, because it might offend others who use the space.

Yana Rawinski is a peer minister of fellowship for LCM and junior in the College of Engineering. She called the space a closet.

“There’s not a desk that has locking drawers,” Rawinski said. “(Short) can’t put anything in there.”

Rawinski compared the office to the space for the LCM branch at the University of Wisconsin-Milwaukee. They have a house.

“They have the space to be together,” Rawinski said. “The hardest part about my job — which I absolutely love my job — is where are we going to fit?”

As an affiliated ministry, LCM is not funded through Campus Ministry. It’s mainly supported by the Greater Milwaukee Synod Evangelical Lutheran Church in America, which funds Short’s position.

Rawinski said funding from Campus Ministry would give affiliated ministries like LCM a voice.

“I’m not saying Marquette needs to buy us a house,” Rawinski said. “That’s ridiculous, but if we had a space where we could keep our Crock-Pot.”

Short, however, isn’t quick to blame Campus Ministry for the lack of a designated space on campus. She said solving this problem is a two-way street.

“I need to show more often and be there,” Short said, shrugging.

There just isn’t enough time in the day, she said.

Tucked on the right side of the hallway before Campus Ministry, the Interfaith Prayer and Meditation Space is small and cozy, with cushions polka-dotting the floor.

It’s here that affiliated ministries meet each month for 90 minutes of dialogue with other religious groups. A representative of each group, often the president, attends.

It’s a check-in. Bernardo Avila-Borunda, who works with multicultural ministry, said the monthly interfaith meeting provides a safe space for minority religious groups to recognize someone coming from a different faith background.

“In finding out about one another, we find out about ourselves,” Avila-Borunda said.

According to the Marquette campus climate study published March 2016, surveyed students stated it was difficult for religious groups to find space for interfaith dialogue and events, specifically citing Jewish, Muslim, Hindu and Lutheran groups’ struggle to find space and work with the majority Catholic population.

Short said it gets even more complicated when looking at the demographics of the Campus Ministry office. Every employee in the office is Catholic, which Short said can make non-Catholic students feel they can’t speak to Campus Ministry about their experiences. 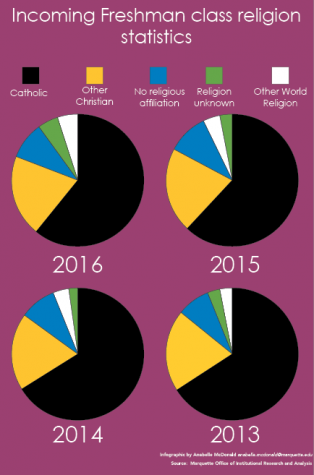 It’s a learning process, Avila-Borunda said, especially in understanding how to create open dialogue and serve the needs of religious groups on campus.

“We’re going to make mistakes and catch up and fall back,” he added.

“I don’t want people to see the problems, because we make sure they’re not problems,” Rawinski said. “Someone shouldn’t come to a church mad that we don’t have a space — that’s not the point.”

Wyatt Meyer, peer minister in charge of service of LCM and senior in the College of Arts & Sciences, said while he understands the challenges, it’s more important to recognize the positive aspects of the group.

“We don’t have space, but what that’s done is made us rely even more heavily on community,” Meyer said.

Sundus Jaber, president of the Muslim Student Association and senior in the College of Health Sciences, said even when solutions are proposed, challenges regarding space don’t simply go away.

Marquette’s Islamic Prayer Room used to be tucked away on the fourth floor of the Alumni Memorial Union. Jaber said the room was too small for the number of Muslim students, faculty and staff who wished to use the space.

In the summer of 2015, the Islamic Prayer Room moved to the second floor of the AMU on the right side of the hallway before Campus Ministry.

The room is larger and accommodates more people. Though Jaber recognizes the improvement, she points out that the room is still too small.

“I wish we could get a bigger space,” Jaber said. “It took them many years to even get the other slightly larger room, so it would take a journey of a couple more years to get an even bigger room.”

For Friday Jumu’ah prayer, the weekly congregational prayer, MSA files a request to rent a larger room that can accommodate about 30 people. It can be difficult to coordinate the prayer, making sure everyone knows where it’s located, Jaber said.

Even then, nothing is guaranteed, she said. The room has been overbooked on a few occasions.

“Confusion can happen,” Jaber said. “Usually we’re able to fix it pretty quick, but I guess because it’s not our own space, we do have to worry about a lot of other things.”

Mary Sue Callan-Farley, director of Campus Ministry, recognized the obstacles faced by religious groups in regards to space, but she said there just isn’t the room to meet all spatial needs on campus.

“What we’re struggling with is one: resources, and two: letting students be who they are,” Callan-Farley said.

Down a flight of stairs from Campus Ministry, Cru, an affiliated Christian ministry, meets once a week Tuesday.

Like LCM, Cru is not funded by Campus Ministry. They are primarily supported by Cru, which is a national organization that receives monetary support through central fundraising efforts.

Cru’s weekly meetings are typically too large to fit in the Campus Ministry office, so they meet in a rented space in the AMU, usually room 157. They utilize the affiliated ministries’ office space for smaller, one-on-one meetings if needed.

Carly Bausch, co-leader of women’s ministry in Cru and senior in the College of Health Sciences, said it hasn’t been a large issue finding space and funding, citing that individuals who work for Cru are available and willing to work to solve any problem.

“I think that they’re always very willing to be available to us, and there are a lot of spaces,” Bausch said.

Christopher Gregorio, peer minister in charge of worship of LCM and junior in the College of Arts & Sciences, said that is because Cru is a national organization with more funding power. It supports multiple full-time individuals to work with branches of Cru throughout the Milwaukee area.

“If I wanted to reserve a space in Joan of Arc chapel … people at Cru, because they have full-time, multiple full-time staffers … can reserve Joan of Arc at a certain time for every Sunday for the entire year before the year even starts,” Gregorio said.

For smaller groups like LCM, who are based locally and have part-time staff, it can be difficult to find resources. Some religious groups apply for funding from Marquette University Student Government, categorizing as a student group.

One of those groups is MSA, who receives the majority of its funding through MUSG. Jaber mentioned she doesn’t view Campus Ministry’s role as providing direct funding.

“We see them as friendly neighbors and not as some overarching thing that funds us,” Jaber said.

Rawinski said becoming a student group in order to receive funding is an option, but decided not to because she thinks the transition would be unnecessary and complicated.

“Then we don’t have the backing of, or credibility of, an organization behind us,” Gregorio added. “So we’re just on our own.”

For Meyer, the concern is less about changing status and more about making the best of the situation.

“As I’ve gotten older, I’ve started to realize the inner workings and why this is what it is, but that hasn’t made me be like, ‘Oh man, I feel like they’re pushing down on us and we’re oppressed,’” Meyer said. “That’s not what it is; it’s just we’re working with what we have to work with.”

However, the members of LCM said they feel optimistic about the future, and recognize that despite obstacles, community is most important, and they’re going to move forward together.

“I feel like it could definitely change for the good,” Gregorio said. “I know people in Campus Ministry are doing their best to do the right thing.”