'An Evening with Groucho' at Rep gets positive review 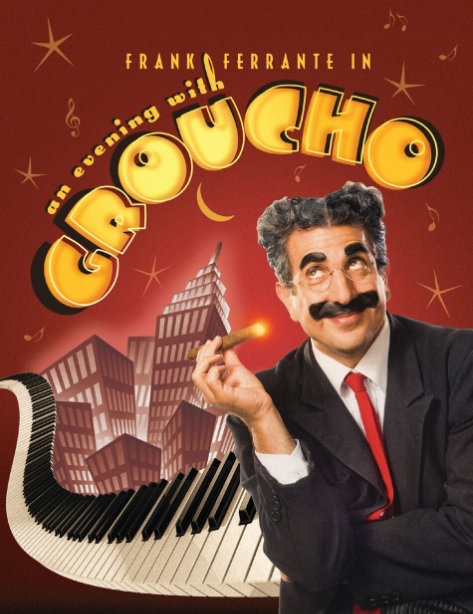 When I received a mysterious postcard in my mailbox that was not addressed to my roommates or me, I didn’t think much of it. However, when I scanned over the advertisement, something caught my attention: A Groucho Marx impersonator was performing a comedy show in Milwaukee.

Writer and performer Frank Ferrante brought together all aspects of Groucho’s personality, taken from films and TV shows, and created one hilarious spectacle called “An Evening with Groucho,” that impressed me beyond belief.

Groucho Marx was a famous comedian of the early decades of the 20th century. He starred in 13 films along with his four brothers, and branched out afterwards to host his own game show that aired in the 1950s, “You Bet Your Life.”

I grew up watching some of the Marx brothers’ famous 1930s films such as “Duck Soup,” “A Night at the Opera,” “Monkey Business,” “Horse Feathers,” “A Day at the Races” and “Animal Crackers.” I also saw countless episodes of “You Bet Your Life.” Still, I wasn’t sure what to expect or how similar the impersonator would be to the actual comedian.

Complete with the famous grease-painted mustache and eyebrows, round glasses, black tuxedo and red neck tie cut off at the bottom, it was almost as if Groucho Marx had come back to life and was standing right there on the stage at the Milwaukee Repertory Theater.

Ferrante had all the energy that Groucho did. He ran around the stage animatedly kicking his feet, and when he made a joke the actor looked up to the ceiling, quickly raised his eyebrows a few times and grinned widely.

Many classic Groucho jokes were used, including one of Groucho’s most famous: “One morning I shot an elephant in my pajamas. How he got into my pajamas I’ll never know.” Even though a lot of the jokes Ferrante used in the show were originally from other places, it was different hearing them live from Ferrante, and still elicited many chuckles.

I was one of the few audience members there under the age of 50, but everyone seemed to have a rib-tickling good time regardless of age.

Groucho stepped into the seating area numerous times as part of his routine to talk to audience members and show off his brash, offensive humor.

He asked a woman what her age was and kept petting and ruining the hair style of a man. He got a young Milwaukee Repertory Theater intern up on the stage and asked for a kiss on the cheek. She went in for the kiss, but at the last moment, Groucho turned his head and it ended up being a full-out kiss on the lips.

The intern was laughing, but wiped her mouth vigorously when walking back to her seat.

He asked a woman if she was in show business, and when she said no, told her rudely to take her resting foot off the stage. I felt like I was transported to the set of “You Bet Your Life.”

Audience members did not need to have an extensive Groucho background or even be a Groucho fan to enjoy themselves.

Ferrante was highly knowledgeable, teaching the audience some history of Groucho’s life and family, including the rest of the Marx brothers. It was delighting to hear the story of how each of the brothers got their nicknames: Their manager had a knack for coming up with names based on unique personality traits.

It also was great hearing some musical numbers in the show. The songs were taken from Marx movies and Ferrante even performed a song that was written and intended for “A Day at the Races” but was never actually included in the film. I caught myself knowing most of the words to “Hooray for Captain Spaulding” and tapping my foot along with the show’s piano player, Gerald Sternbach.

Sternbach accompanied all of the songs and soloed on a few, including the “You Bet Your Life” theme song. He also used his piano to mimic sounds, such as a ringing telephone, as a part of Groucho’s routine, which was impressive.

Overall, seeing “An Evening with Groucho” was a fantastic way to spend my Sunday night and wrap up my weekend. I would highly recommend seeing the show.

The show runs until May 28 in the Stackner Cabaret.