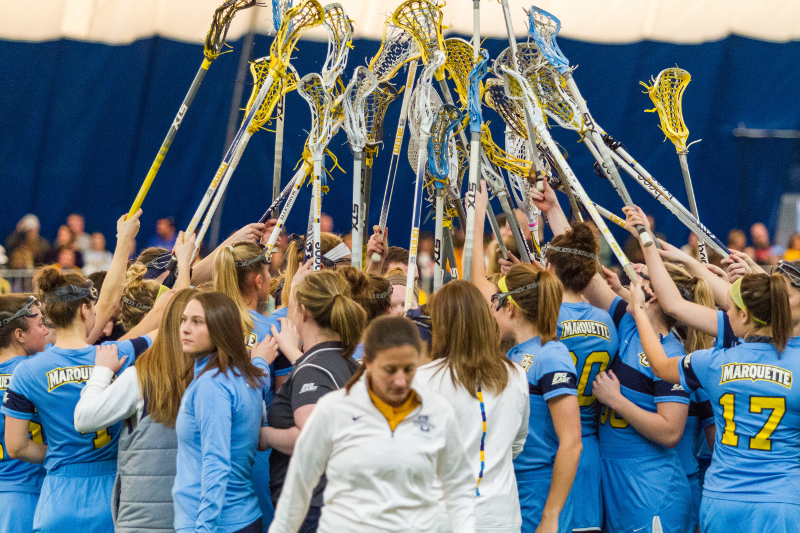 At times, the women’s lacrosse team made it look easy Saturday afternoon when they defeated Villanova 20-6.

After a heartbreaking overtime loss against Temple last weekend, the Golden Eagles needed to respond and take care of business. From the get-go Marquette was dominating in play and jumped out to an early 4-0 lead. Junior Charlotte McGuire tallied two quick goals to help Marquette take command. Villanova had no answer for Marquette, as the Wildcats were held scoreless until four minutes left in the first half.

“We came out with a lot of energy and passion and that really helped us,” head coach Meredith Black said. “We executed on all ends of the field.”

Strong defensive play helped the Golden Eagles take command early. Marquette forced the Wildcats into 10 turnovers in the first half while only committing 10 fouls themselves, an area where the Golden Eagles have struggled. Fran Meyer anchored the defense as the unit limited Villanova to just 22 total shots. Marquette defenders were extremely energetic and flew around the field. Goalie Jules Horning also had a strong game in goal-saving seven of the Wildcats’ shots.

“Defense is our heart and soul,” Black said. “We have a better chance of winning games when our defense plays well.”

The defense allowed Marquette’s offense to control the pace of the game and have the majority of possession. Offensively, Marquette was firing on all cylinders as once again multiple players contributed. Julianna Shearer, Grace Gabriel, Amanda Bochniak, Allison Lane and McGuire all recorded hat tricks with McGuire leading the way. McGuire answered the bell by setting a career-high with four goals, including a crucial goal to end Villanova’s short run in the second half.

“We knew she (McGuire) had this in her. There’s no question she’s a great player,” Black said. “She’s shown some inconsistencies in her play, but today she came out and brought it.”

With three goals and one assist, Shearer became the fourth Golden Eagle to register 100 points and the second player this season after Bochniak.

With the win, Marquette improves to 2-1 in BIG EAST play and 4-7 overall.

Marquette will arguably face its toughest opponent at home Wednesday when Florida comes to Milwaukee. The Gators will enter the game ranked third in the nation and their only loses are to the top two teams in the country, Maryland and North Carolina.