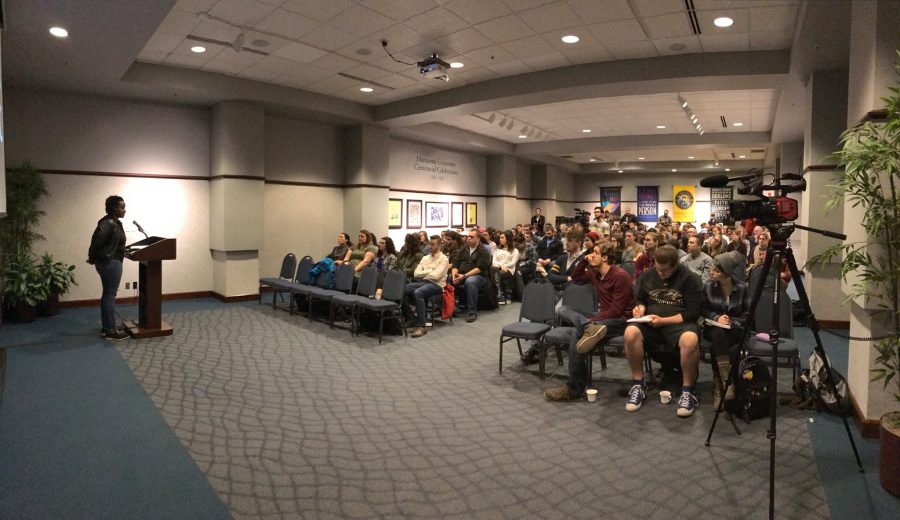 Clare Byarugaba came to visit Marquette's campus from Uganda to share her experiences as a LGBTQ+ activist. Photo via Marquette Democracy Facebook page

Clare Byarugaba, the second international guest of the Marquette Democracy Project, delivered a speech on LGBTQ+ rights in Uganda.

Byarugaba is a 28-year-old lesbian recognized as a civil rights pioneer in Uganda and the LGBTQ+ movement as a whole. She is the successor to David Kato, an activist described as “Uganda’s first openly gay man.” Byarugaba said that Kato’s story represents the struggle that the LGBTQ+ community has been facing for years.

“The media is completely subjective in Uganda,” Byarugaba said. “Besides offering more representation to the Church than our activists, they put people in danger. Rolling Stone* outed the names of 100 homosexuals, basically telling people to come find us and arrest us. They urged people to hang us. That is how David Kato died.”

Uganda has gained international infamy for anti-gay legislation passed in 2014. The legislation was introduced in 2009, but did not gain traction until the bill was signed by Ugandan President Yoweri Museveni.

“He used it as a platform to stand up to the West,” Byarugaba said. “He did it for his popularity. Ugandans believed that this would make us the moral compass of the world.”

Known widely as the “Kill the Gays Act,” the draconian act has included the death penalty for certain homosexual acts and life sentences for consensual homosexual relationships. Byarugaba also said that there is a seven-year penalty for consoling LGBTQ+ members.

Activists filed a petition to repeal the act. It was rendered invalid on procedural grounds in November 2014. While President Obama’s diplomatic visits to Africa were a major factor, Byarugaba wanted to emphasize that the real heroes in this matter were activists in Africa.

“We refuse to be pushed back into the closet,” Byarugaba said. “The closet is dark, lonely and scary.”

Despite the recent legal victory, the activists are still facing adversity in Uganda. Byarugaba told the story of a young gay man who was nearly run over by a car and killed. His father was quoted as saying: “I’d rather have a dead son than a gay son.” Byarugaba also told her own story of how her father told her to get U.S. visas and abscond the country.

When Byarugaba did come to the U.S. as part of the Marquette Democracy project, the journey was not as smooth as anticipated.

“It was a nightmare of a journey,” said Jessica Rich, assistant professor of political science. “Due to a high frequency of frauds in Uganda, they weren’t going to let her on unless I showed them my credit card statements. Apparently, I blocked out the wrong amount of numbers, so she sat in the airport for four hours, thinking that she was not going to be able to come.”

Byarugaba was also subject to the new travel regulations imposed by President Donald Trump’s administration, and had to check her laptop into her suitcase. But despite arriving five hours late, she had a smile on her face.

Rich was vital to helping Byarugaba come to campus. Rich reached out to the Human Rights Fellowship at Colby College in order to bring Byarugaba in.

“It’s important to hear perspectives like this from someone who works in such a dangerous context,” Rich said. “I think it really embodies what it means to be the difference.”

Rich also stressed the importance of strengthening relationships between colleges that the Democracy Project provides.

“I’ve been here for three years and I feel isolated,” Rich said. “Until the (Democracy Project) started, I never saw journalism students unless they took my class. There’s so much that they could learn from (political science) and vice versa.”

Bryce Uy, a senior in the College of Arts & Sciences, was one of the students in the international affairs capstone who worked to gather background information on Byarugaba and Uganda.

“I think it’s important to have speeches like this because people from a liberal perspective and conservative prospective can come here in an area with no contention and learn about this,” Uy said.

*In this case, Rolling Stone is a newspaper based out of Kampala, Uganda, and not the American magazine.