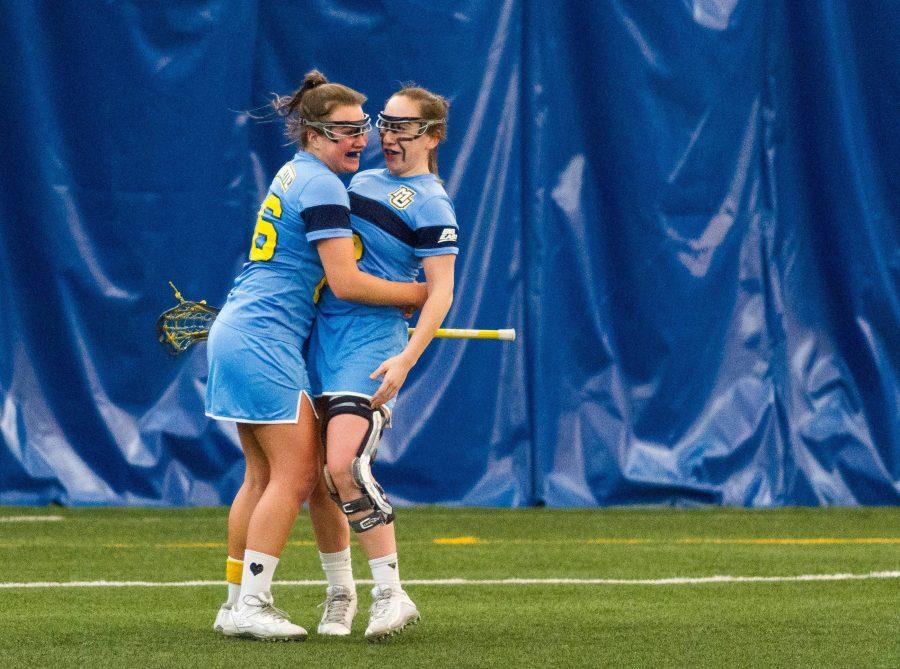 This year, the women’s lacrosse’s team experiencing something new: depth.

The teams’ starting attackers, Julianna Shearer, Amanda Bochniak, Claire Costanza and Riley Hill, have led the team to fourth in the BIG EAST in total points scored. With the team having an abundance of riches, Marquette is placing themselves in prime position to make a run at postseason play for the first time.

“It’s the best team I’ve been on in my four years,” Shearer said.

So far this season, the quartet of attackers have combined for 99 points, tallying 63 goals and 36 assists. In the team’s last win over Cincinnati they totaled 21 of the team’s 25 points. When you include junior Grace Gabriel, who is listed as a midfielder, Marquette has one of the most potent offenses in the BIG EAST.

“The talent on this team is incredible and something we’ve never had,” Costanza said. “It pushes all of us to do a lot better.”

What makes their scoring even more impressive is the team has played against five nationally ranked teams, and have competed in the majority of those games. The attackers credit their three years together and their unselfishness for their success.

“Going back to my freshman year it was more individualized and we didn’t have any connection,” Bochniak said. “Now that we’ve grown, we know each others tendencies so those connections are just automatic.”

Perhaps the player with the biggest adjustment was Costanza, who led the team in points during her first three seasons. Having only six goals this year, the graduate student has been more of a facilitator, assisting on 15 goals, tied with Bochniak for a team high.

“It was a little frustrating in the beginning just trying to get used to it, but I think now we found a good groove,” Costanza said.

It’s the first time everything has gone according to plan for the offense. Three of the four have come back from season-ending injuries, all at different times. Shearer her freshman year, Bochniak her sophomore year and Costanza last season, marking this season the first all have played together at once. Shearer, who sits third in the BIG EAST in total goals, said the trio built a bond based on their similar experience.

“Going through a severe injury takes a mental hit on you. You learn how to get that mental toughness,” Shearer said. “You take that into everything you do, and I think it’s given us an extra push because we know what it’s like to not play.”

With Bochniak recently joining Costanza and 2016 graduate Hayley Baas in the 100-point club, the program now has three 100-point scorers overall. Shearer also will likely reach the milestone, needing only two more points to achieve it. Hill sits at 78 points in her career, and having another year left she on pace to reach the mark.

“It’ll be great for this program to get more girls in that club and I have no doubt in my mind that many of the girls who I’m playing with now will reach it,” Shearer said.