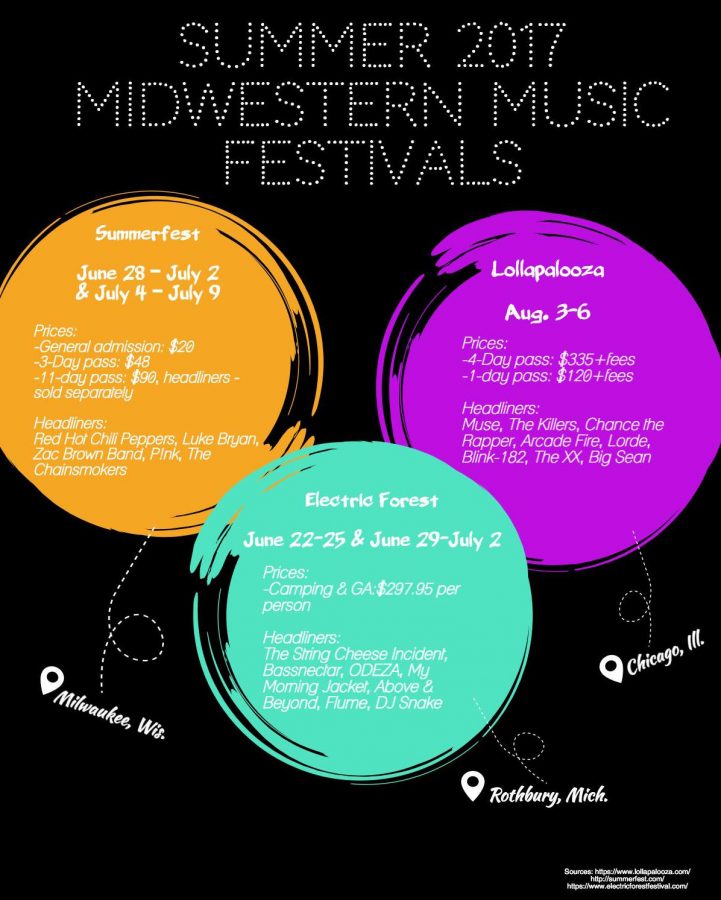 The summer is fast approaching and so are some of the biggest annual music festivals in the country.

The Midwest is home to two of the most popular festivals in the world: Summerfest and Lollapalooza. If ticket prices aren’t enough to scare off students, they will see a variety of acts take the stage, from up-and-coming artists like Chance the Rapper to country superstars like Luke Bryan.

While Summerfest, the 11 day-long party hosted right here in Milwaukee, may be the largest festival in the world, it does not go unmatched in terms of excitement.

Lollapalooza, a four-day festival in the heart of Chicago, brings in hundreds of thousands of attendees each year. The lineup was announced about a week ago, and students have mixed emotions.

This year, the festival will welcome Chance The Rapper, The Killers, Big Sean, Run The Jewels, Arcade Fire and many others.

Alex Beckman, a freshman in the College of Health Sciences, was let down by the announcement.

“This year’s lineup is solid, but it does not come close to last year’s stellar lineup. I will say, I am very excited to see Big Sean though,” he said.

Regardless, Beckman still plans to attend for a second year. Although the lineup is not what he was expecting, the freshman said his favorite aspect of Lollapalooza is that there are several big name artists to choose from. In his experience, the festival is also much cleaner than events like Electric Forest, a two-weekend EDM festival in Rothbury, Michigan.

The festival is about more than the big music acts.

Sean Shields, a freshman in the College of Nursing, said that his favorite part about Lollapalooza is the culture of the whole event. Shields also compared this year’s lineup to 2016’s.

“One thing that is better about this year’s lineup is that it has a more alternative feel, which appeals to me more and will attract a wider range of people,” Shields said.

Lollapalooza tickets are priced from $120-$335 per person. The festival, which is five months away, is already sold out.

In comparison, single day tickets for Summerfest go for $20 a piece while an 11-day pass is $90. From headliners like the Red Hot Chili Peppers to local amateur bands, magicians and kid-friendly puppet shows, the lineup offers something for everyone.

Ben Lawrence, a freshman at Milwaukee School of Engineering, described the festival as impressive.

“I’ve been to Summerfest countless times throughout my life. The fact that the genres are so varied does an excellent job of attracting a diverse crowd,” he said.

Lawrence noted that his favorite part each year is the Fourth of July.

“Being in a perfect location to see the fireworks booming over the lake is unreal,” he said.

Although some bands are already confirmed, the full lineup for Summerfest has not been released yet.

“Summerfest cannot be compared to the festivals featuring only one main genre like Electric Forest, but instead it is a broadly cultured experience,” Lawrence said.