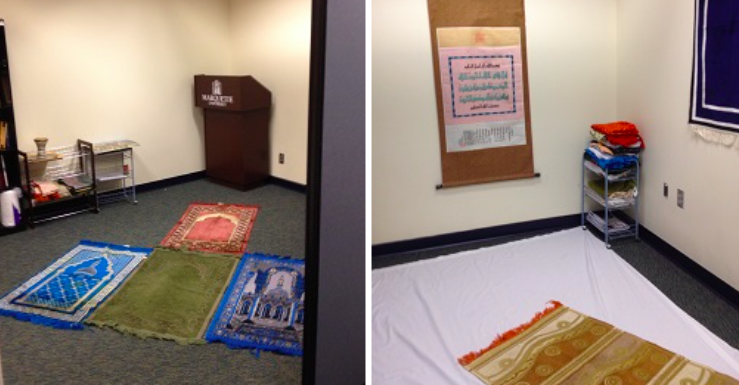 The Islamic prayer room in the Alumni Memorial Union. Photo via marquette.edu

The Islamic prayer room in the Alumni Memorial Union has been vandalized twice, once in November after the presidential election and once in the days following the release of the second travel ban. While the damage was not permanent or large-scale, it was noticeable and highly upsetting to students.

A Muslim student, who wished to remain anonymous for fear of being harassed, said, “I use the prayer room often, and so do some of my friends. It was hurtful to know people would vandalize that space. We don’t deface any of the Christian symbols that are on campus.”

The Islamic prayer room incidents led to the installation of a security camera in the hallway. It is unclear if those responsible for the vandalization can be seen on tape or if they have been caught. The original instance of vandalization did go to Marquette University Police Department, but no charges ever came out of it.

Mary Sue Callan-Farley, director of Campus Ministry, said, “After the first vandalism of signage, we created banners to identify the hallway and adjoining prayer spaces as sacred space in which all are welcome and free from violence.”

In a letter released Feb. 15, Campus Ministry condemned the recent hate speech and the vandalization of the prayer room. “Events of recent weeks have cast light on divisions in our country and among our faith communities. In the AMU hallway leading to the prayer spaces and offices of Campus Ministry, we have observed two such examples of this distress on hallway signs defaced with messages which targeted our Muslim community members. The words written can only be understood as hate speech,” the letter said.

Muslim students have reported growing microaggressions, as well as direct vocal harassment. Most of the harassment incidents reported have been student-on-student, occurring on or near campus. Reports say phrases such as, “Go back to your own country,” are used, as well as profanity like “F— Muslims.”

The letter also said, “Affiliated Ministers and campus Ministers come from various backgrounds. As individuals we do not agree on all issues. We do agree that hateful words targeted at one person or group injures the entire community.”

The recent upswing in incidents has raised discussions in the latest MUSG and academic senate meetings. Blake Hartman, who serves as a senator for both Marquette University Student Government and the Academic Senate, said there is consensus among members in both groups that these actions are wrong.

“These actions are deeply disturbing, and we know it is important to protect our Muslim students because they add so much to our campus,” Hartman said.

The Academic Senate put a resolution on its agenda March 20 that would “condemn violence and hate speech, express support for Muslim students.”

Hartman said the Academic Senate is looking at the resolution, which would take about two to three weeks to pass.

“Basically, a resolution passed would denounce the actions that have taken place lately, and make a reinforced statement that the university stands with Muslim students,” Hartman said.