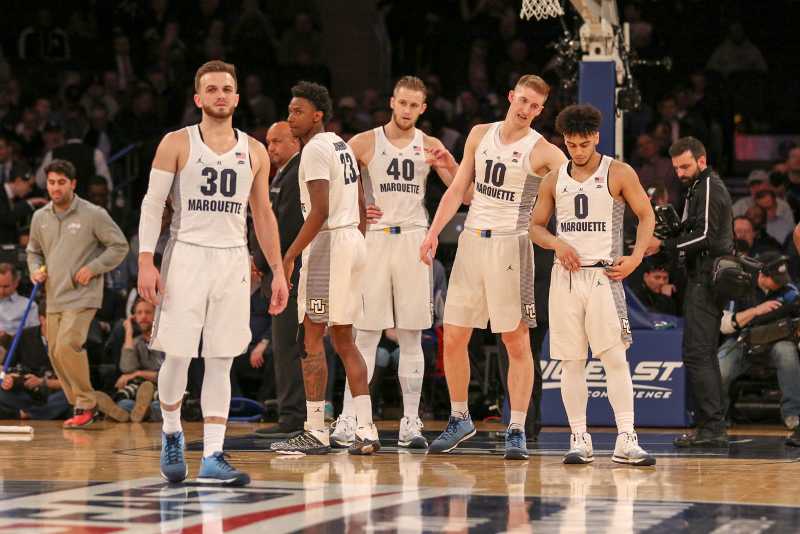 Men's basketball players converse on the court at Madison Square Garden during the BIG EAST Tournament.

Howard exceeded expectations in his freshman season by leading Marquette in scoring at 13.2 points per game, and leading the nation in 3-point shooting at 54.7 percent. His historically great shooting season covered up his struggles on the defensive end and lack of consistent playmaking ability. Howard earned a place on the BIG EAST’s talent-laden All-Freshman Team.

The UNC Asheville transfer was electric in his first season in Milwaukee, finishing third on the team in scoring and seventh in minutes played. In February, Rowsey led the nation in offensive efficiency, but like Howard, his small size made defending difficult and he wasn’t a particularly great playmaker.

Johnson’s final season for Marquette was undeniably his best. He posted career-highs in points, rebounds, assists, steals, blocks and minutes. Despite leading the BIG EAST in steal percentage the senior was erratic on the defensive end, forcing him to come off the bench late in the season. Johnson’s finest game for the Blue and Gold may have been his last, when he went off against South Carolina in the NCAA Tournament.

Though Hauser was forced to play power forward rather than small forward in his freshman season, he was arguably the Golden Eagles’ most reliable performer. The Stevens Point, Wisconsin, native nailed 45.3 percent of his 3-point shots, led the team in defensive rebounding and was steady on defense. He will forever be remembered after bringing down the victory-clinching rebound against then-No. 1 Villanova.

Fischer finished his final year in the Blue and Gold fourth on the team in scoring average with 10.9 points per game, and first on the team in rebounding with 5.9 per game. The center also improved as a rim protector, totaling 53 swats and ranking 65th nationally with a block rate of 7.2 per KenPom. Although he improved many aspects of his game, Fischer failed to cut down on his foul troubles, averaging 5.6 fouls called per 40 minutes.

Reinhardt started the season slowly while dealing with an Achilles injury, but was vital in some of Marquette’s signature BIG EAST wins. He scored 21 points in Marquette’s road victory against Creighton and 17 on National Marquette Day against Xavier. He is woven into the Marquette lore by hitting a game-tying three and game-winning free throws to defeat then-No. 1 Villanova in January.

Steve Wojciechowski relied heavily on Cheatham defensively, which led to some long nights for the sophomore. He notably played the entire game in Marquette’s overtime victory against Seton Hall in January. However, his offensive numbers decreased from his freshman season, falling from 11 points per game to eight. He scored less than five points in seven of Marquette’s final nine games and played 15 minutes or less in the final five.

Wilson was thrust into a defensive role coming off the bench after playing 28 minutes per game his first two seasons. He posted career lows in nearly every major statistical category but was the team’s top defensive option. He was at his best late in the season when the team slumped and was part of the five-man unit that finished off then-No. 1 Villanova. His leadership will be missed as he exercised his graduate transfer option.

The sophomore from Neenah, Wisconsin, took on a larger role during his second season at Marquette. Heldt increased his minutes per game average from 5.1 to 13.1. Although he saw the floor more, Heldt was the least-used offensive player. However, the center did show some encouraging signs, including a nine-rebound, five-block performance against Xavier and 15 point, 10 rebound night against St. John’s.

In his third year at the helm for Marquette men’s basketball, Wojciechowski led Marquette to its first NCAA Tournament berth since 2013. Praise should be given to the head coach for adjusting to his team’s strength in 3-point shooting and spreading the floor by giving Rowsey more minutes throughout the season. Wins over then-No. 1 Villanova and at then-No. 7 Creighton within a four-day span highlight the third season of the Wojciechowski era.