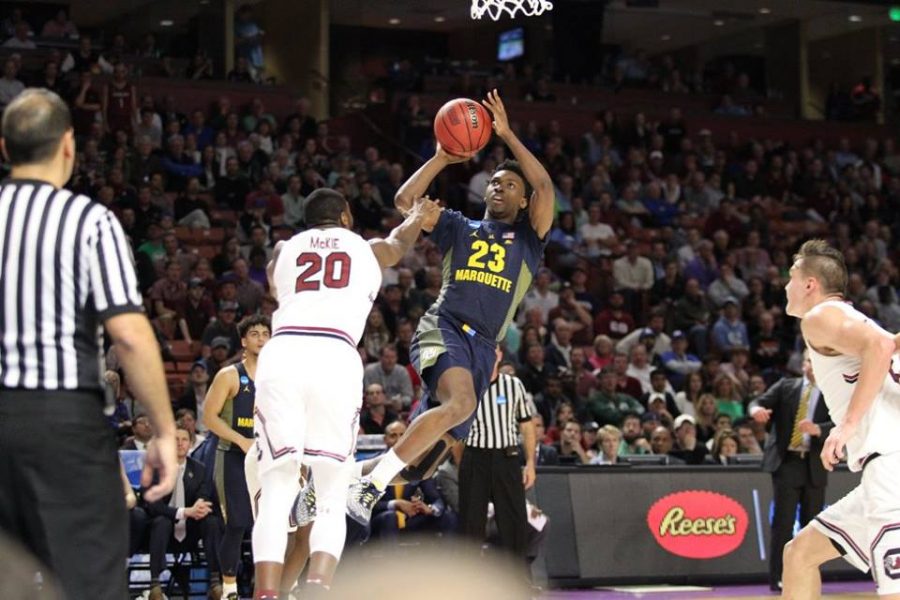 South Carolina is one of several familiar faces Marquette could encounter during the National Invitation Tournament.

Despite the Golden Eagles and South Carolina playing a back-and-forth grudge match for a majority of the game, the Gamecocks ended the game on a 20-6 run to create a lopsided 93-73 final.

“Taking care of the ball has got to be one of the things we do best against a team the caliber of South Carolina,” head coach Steve Wojciechowski said. “We weren’t able to do that. And the reason was because South Carolina was playing outstanding defense and playing really hard, and we weren’t able to sustain what we needed to do from a mental or physical perspective.”

Even when South Carolina ran regular offensive sets, they were able to put up floaters or slam down ferocious dunks. The Gamecocks scored 42 points in the paint: over twice as many as Marquette.

“They were able to get to the basket,” center Luke Fischer said. “We weren’t always up on our ball screen coverage. We had some miscommunication plays, and they capitalized on all that stuff.”

Freshman small forward Sam Hauser added, “We didn’t get back in transition well enough. We didn’t box out well enough. And it showed on the scoreboard. When you come to the tournament, it’s a man’s game.”

South Carolina’s Sindarius Thornwell, the SEC Player of the Year, proved to be a matchup nightmare for Marquette. He put up a double-double, scoring 29 points and snagging 11 rebounds. Seven of his boards came on the offensive glass.

Marquette scored the first eight points of the game, including another Andrew Rowsey four-point play. South Carolina responded well, cutting the lead down to three by the 16-minute mark. The Golden Eagles went on another run in the middle of the first frame, scoring ten unanswered, but South Carolina spent the rest of the half cutting away at that margin. A layup by Maik Kotsar in the final minute cut the lead to 40-39 at the half.

South Carolina took its first lead at the 15:55 mark of the second and led the rest of the way. The lead teetered between two and seven three times before South Carolina was able to pull away for good. Marquette went about six and a half minutes without a defensive stop.

By the waning stages of the game the offense was slowed down by South Carolina’s press and man-to-man defense, and the Gamecocks lived up to their reputation as a strong three-point defending team. They held Marquette to 3-for-12 in the second half.

“I thought over the course of the game their physicality wore us down,” Wojciechowski said. “You have to be incredibly mentally and physically tough in order to win any NCAA game, but in particular against South Carolina tonight. We weren’t able to sustain that for as long as we needed to, and that’s when they were able to create separation.”

Marquette’s season comes to a close with a 19-13 record and more memorable moments than the previous three years combined. The Golden Eagles made their first NCAA Tournament appearance under Wojciechowski, earned the best regular season victory in program history and downed a handful of the BIG EAST’s heavyweights.

“This has been a great year,” Wojciechowski said. “When I took the job, we had to reboot the program. And in a few short years, we’re back into the NCAA Tournament where we want to be consistently. And I give our guys a lot of credit. There are different times over the course of the year where, you know, if we didn’t respond, we wouldn’t be in this position.

“So there’s a lot to be proud of … It’s hard to feel as good about it just because we left the battlefield. But I’m sure as we take a step back we’ll feel really good and so should the people who support our program and support the Marquette community.”