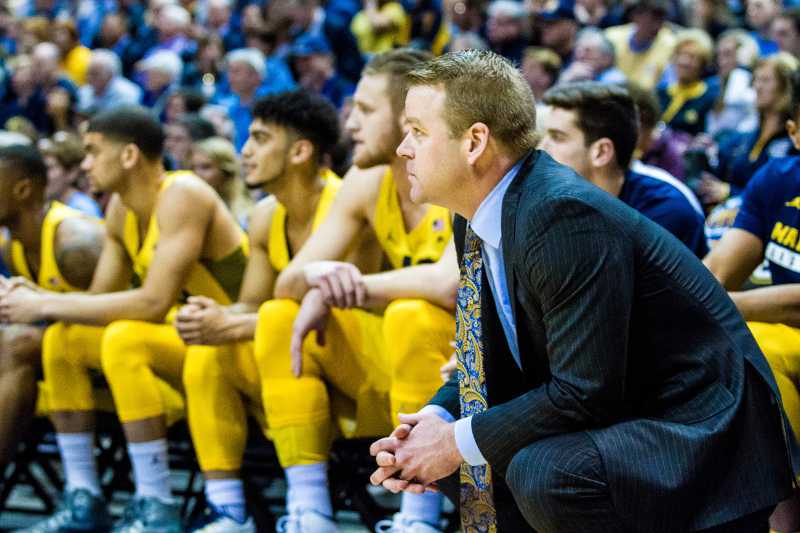 Steve Wojciechowski (right) is in the NCAA Tournament as a head coach for the first time.

South Carolina does have one of the best 3-point defenses in the country, but if anyone can solve that, it’s Marquette. Andrew Rowsey scored 30 points when he played South Carolina while with UNC Asheville, and he’ll be relied on heavily again tonight. Although the guards will be the focus, this game could come down to whose big man gets into foul trouble first, with Marquette’s Luke Fischer and South Carolina’s Chris Silva being two of the worst offenders in Division I basketball.

The Gamecocks are cold right now, losing five of their last seven games. Their most recent losses came to two teams outside the tournament, Ole Miss and Alabama. South Carolina’s offense has stalled even more than it normally does, creating an opening for Marquette to win its first NCAA Tournament game under Steve Wojciechowski.

When you rely on one player, there’s so much that can go wrong. South Carolina is too reliant on Sindarious Thornwell for my taste. He’s brilliant, but his high usage sidekick PJ Dozier has gone cold, and the Gamecocks were already a brutal offensive team. Marquette has no less than five players who can score efficiently and in bunches. If the Golden Eagles trust their top ten offense and keep the ball moving, the math will favor Marquette in a big way — pseudo-home court advantage be darned.

Don’t be surprised to see almost a complete change in style of play from the Golden Eagles out of the gate on Friday. The Gamecocks tout a vaunted defense that is near the top of the country in points allowed (64.5), turnovers forced (17.2) and 3-point field goal defense (29.3 percent). The success for the Golden Eagles will lie in their abilities to value the basketball and spread the floor.

Really, this game will be a match-up of two conflicting styles in general. On one hand, Marquette is going to want to run the ball down South Carolina’s throat with transition buckets and success from the perimeter. On the other hand, the Gamecocks are a team that aim to slow the game down on both ends of the ball. According to kenpom.com, USC is 173rd in the country in adjusted tempo offensively and 306th in the country in average possession length on defense, holding their opponents to an average of 18-second possessions.

If the Golden Eagles want to live another day, I think they have to rely on a post-presence with Luke Fischer and Matt Heldt. Entry passes can draw in defenders, and if the Golden Eagles are able to kick it out effectively from the post to find a number of shooters with 3-point shooting prowess, I expect them to be successful.

Although South Carolina has a stifling defense, the Golden Eagles 3-point shots will fall early. The Gamecocks’ lack of offense (South Carolina has the ninth worst offense in the entire tournament field according to KenPom) won’t allow them to close the gap, and some timely shooting from Katin Reinhardt will lead Marquette to victory.