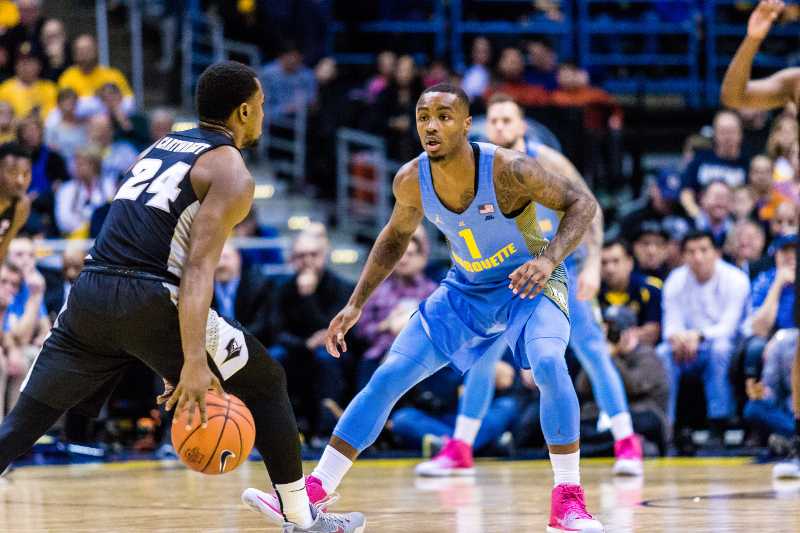 In the second half of a tight game between Marquette and Creighton in January 2015 the Golden Eagles offense went dry. Steve Wojciechowski’s young squad turned to its two unlikely leaders, graduate transfer Matt Carlino and redshirt freshman Duane Wilson.

The offensive odd couple scored every single one of Marquette’s 25 second half points en route to a dramatic 53-52 victory. Wilson scored 14 of his 17 during the final 20 minutes as he continued to establish himself as Carlino’s scoring sidekick.

In his first two seasons at Marquette Wilson proved to be a reliable scorer, averaging 11.9 and 11.6 points per game. His freshman season is the sixth best scoring season for a freshman in Marquette history with 380 points.

“My first two years I was more like the offensive guy,” Wilson said. “Second option from Carlino (the first year). Then last year one of the second options after Henry (Ellenson).”

Now a redshirt junior, the Dominican High School grad is scoring just 4.8 points per game and playing half the minutes he used to, but he’s having perhaps his most impactful season yet. He’s become a calming defensive presence off the bench.

Wilson didn’t see his role change as a demotion either. He saw it as an opportunity.

“This year we have so many shooters and different guys that are talented in many different ways offensively, and coach stressed that we need a defender and that was kind of right up my alley,” Wilson said. “When he first got here he always mentioned I could be a great defender and he wanted me to eventually get to that point where I could be a two-way player. I feel like this year I really made that stride to be a lock down defender.”

Wilson is posting a career-best 3.5 percent steal percentage despite often being tasked with the toughest defensive matchup. Though Wilson is just 6-foot-2, he frequently plays as a small forward, guarding wing players who are substantially bigger and stronger than him.

“It’s just toughness and having heart,” Wilson said. “With me it’s just a pride thing, I hate when people score on me. I take that personally.”

“Duane has showed how tough he is,” Luke Fischer said. “He’s our defensive stopper, he’s the guy that we look to to always guard the best offensive player. The toughness he brings really elevates everyone else’s play on the defensive end.”

It wasn’t entirely a smooth ascent, though. Before Wilson ever played a game for the blue and gold, he was forced to deal with the departure of the coach who brought him to the program. Despite Buzz Williams’ unexpected exit after the 2013-’14 season, Wilson said not much changed for him.

“Coach Wojo, when he came he came in with open arms,” Wilson said. “A lot of people thought me, JJ (Jajuan Johnson) and the guys that was left over from Buzz was going to leave but I actually told people that I wasn’t making any decisions until I found out the coach.”

“Wojo got the job and I always knew of him, you know slapping the floor, playing at Duke. And I knew the guards he coached were Kyrie (Irving) and Jay Williams, all those guys. And I was like that’s a guy I want to play for.”

It didn’t take Wilson long to earn Wojciechowski’s respect. In his second season at the helm, the ex-Duke assistant named Wilson team captain along with Luke Fischer. Wilson was just a redshirt sophomore at the time, but his on court demeanor and vocal leadership were evident all along.

It’s not a job he takes lightly.

“Coach would always say we need you to be a vocal guy, you’ve got a great voice and the guys respect you,” Wilson said. “We need you to step up and be that guy that’s always going to talk to us, and even when it gets hard guys look at me to talk and get guys going. Even when I’m having a bad game I still have to have the best talk and be the most vocal guy on and off the court.”

The redshirt junior’s leadership skills shouldn’t surprise anyone though. Wilson has life experience his teammates don’t. He’s a father. Wilson has a 3-year-old son named Kobe and he says being a father has made him more mature.

“It actually helped me grow up a lot,” Wilson said. “My freshman year I really didn’t know much about it. It was tough, especially with the coaching change. I really didn’t have a coach or somebody to come to and say, ‘I have a son.’ I didn’t tell coach Wojo until maybe like June or July when we had a meeting. I was nervous to tell him, I didn’t know what to expect, but he helped me out and gave me advice. He told me it’s great to be a father but you have to mature.”

Having a child handed Wilson a different set of responsibilities than the average student athlete.

“I can’t be selfish anymore,” Wilson said. “I have to share, whether it’s clothes, money. I have to focus on my son. That’s given me another reason to go harder, work harder. In the summer time grind harder because I have someone looking up to me, everything I do. I can’t have bad body language when he comes to games, he watches everything I do.”

Being an involved parent is a point of pride for Wilson.

“My dad was in my life a lot but I had a lot of friends that didn’t have dads that I was close with and I saw how it affected them,” Wilson said. “They would feel bad, like, ‘man I wish I had a dad like yours.’ I was like when I have a son I’m going to make sure I’m going to be there for everything and be like his best friend.”

His maturity has shown on the basketball court as well. When his team needed him most this season, Wilson stepped up. After a brutal road loss to Georgetown, Wilson was inserted into the starting lineup, helping to spark four wins in the next five games.

Not only has he been a key starter as of late, he’s been a part of closing lineups in key victories throughout conference play, namely in the win against No. 1 Villanova.

“He’s got a different role and he’s embraced it with the maturity of an upperclassmen whose primary focus is winning,” Wojciechowski said. “It’s nice to see him rewarded for that.”