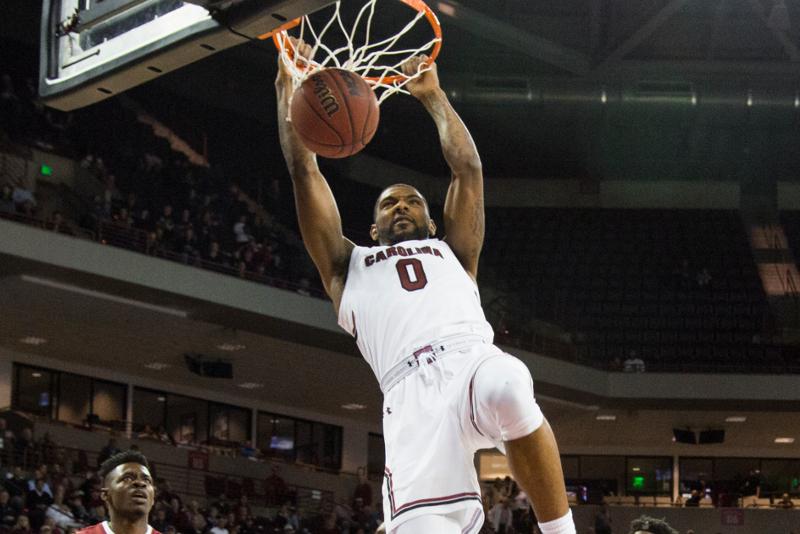 Sindarius Thornwell dunks against Arkansas in an 83-76 loss to the Razorbacks in February.

With Marquette’s first NCAA Tournament game since 2013 just around the corner, the Wire talked to Abe Danaher, sports editor of The Daily Gamecock, about what to expect from South Carolina.

What should Marquette fans know about South Carolina?

I really think they should know that this is a team that relies on their defense. They are going to win or lose the game on how their defense plays. They will be pressuring your guards. I think the game will be decided by how Marquette can handle the pressure defense that has really terrorized many of the teams that South Carolina has beat this year.

Sindarius Thornwell is obviously having an outstanding season, averaging 21 points per game and earning SEC Player of the Year honors. Could you describe his game for me?

He’s really grown a lot on the offensive end especially this year. He’s really become the centerpiece of their offense, especially down the stretch. He carried them to the finish line. He can beat a team from pretty much anywhere on the court. He has the ability to take over a game, which we’ve seen time and time again. He had 44 and 21 against Alabama this season. He’ll be slashing, he’ll hit a couple threes and how he really gets most of his points though is at the line. He’s really shown an ability to get to the line against any team.

Are there more under-the-radar players Marquette should be worried about?

On the offensive end, the deciding factors can be PJ Dozier and Chris Silva. PJ Dozier had a stretch this season when Sindarius was out where he was the offense. If he can have a big game he can really take a lot of the pressure of Sindarius and he’s a really good other option. In the past eight games he’s really been struggling from the field. He hasn’t been shooting like he was at the start of the season when he was really a viable second option, but if he can find where he was at it could cause problems for Marquette.

Silva, the big man, if they can get any inside presence (that will be important). Right now all the pressure is on our guards. They don’t focus much on their big men. They’ve had trouble catching the ball. They’ve had trouble having much of a presence on the offensive end. Silva is in foul trouble pretty much every game. If he can be the player he’s shown he can be and be a threat on the offensive end, that’d be huge to just take any pressure off the guards.

This recent stretch hasn’t been kind to South Carolina. The Gamecocks have lost five of the last seven games, including an SEC Tournament quarterfinal matchup with Alabama. What has gone wrong?

Lately I think there’s just been so much offensive pressure on Thornwell. We haven’t seen a low-post presence in a while. PJ Dozier’s really tailed off a bit. Over the last eight games compared to his first 14 he’s down like four points per game and 10 percentage points from the field. Teams have really keyed on Sindarius and it’s put a lot of pressure on their defense. It’s gotten to the point where their defense is keeping them in games but their offense can’t win them. It’s been the Sindarius Thornwell show on offense and there hasn’t really been much help there.

You mentioned the defense, and if you look at KenPom they are one of the best in the country. They are also particularly effective against 3-pointers, Marquette’s strength. Are these two things you’ve noticed based on the eye test as well?

Yes, and that’s something that hasn’t really changed that much down the stretch. I see a little bit of trouble, especially as of late, with the big men working off high pick-and-rolls, but as far as 3-point percentage goes, they held Florida to 0-of-15 from three. They won that game because of it. It was the first time in like 30 years that they hadn’t hit a three in a game. They’ve shown the ability to take any team out of rhythm from three and it’s really been a saving grace. Their guards, especially PJ, are pretty lengthy. Their man-to-man defense is on you all the time and they really make great rotations.

Based on listening to Coach Frank Martin’s press conference and reading stories from people around the program, it seems everyone was surprised to see South Carolina get a seven seed.