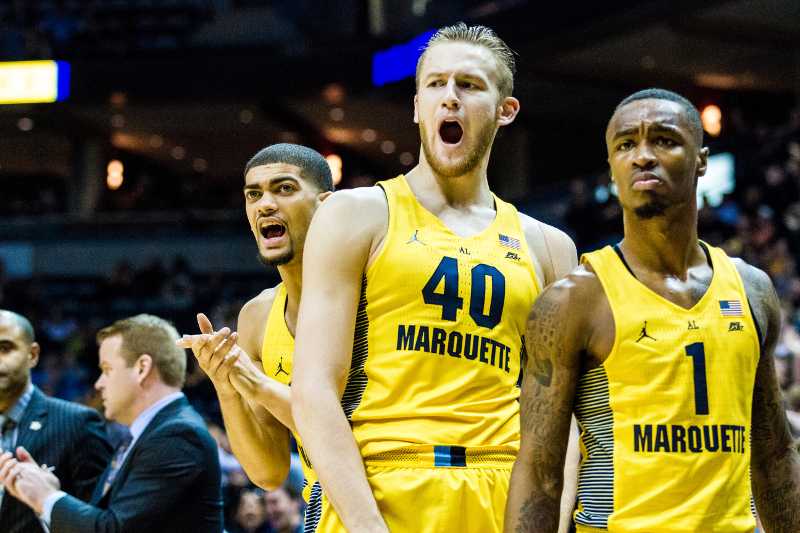 Marquette celebrates on the sidelines during a game against St. John's.

After three long years of disappointment, agony and too many heartbreakers to list, Marquette is back in the NCAA Tournament.

“I’m really happy for our guys and to see how excited they were and the emotions that they were feeling, it makes it all worth it,” Wojciechowski said. “I’m really excited to be a part of March Madness. I’ve always felt it’s the best sporting event in the world.”

“The goal was to go to the NCAA Tournament,” said Katin Reinhardt, who is the second player in history to make the NCAA Tournament with three different teams. He previously played with UNLV and USC. “Once we heard that we knew we have to go to work. … We’ve got to have a business-like approach every single day.”

Marquette didn’t have to wait long to find out, either. The Golden Eagles’ name was called seven minutes into the show, as they are a part of East Region, the first region announced.

“I’m thankful for CBS they didn’t make us wait until the last bracket,” Wojciechowski said. “I felt we were going to be in. I felt that we had a good enough season and resume where our team deserved to be in the NCAA Tournament, but until you hear your name called, there’s always that percent chance they may not call it.”

“Honestly, when they first called the name I didn’t even notice it,” Markus Howard said. “Then all of a sudden people started going crazy and I reacted. … It’s indescribable.”

The South Carolina and Marquette matchup is a clash of styles, with the Golden Eagles playing an offensive game and the Gamecocks boasting one of the best defenses in the country.

“They really get out and pressure and try and turn you over,” Wojciechowski said. “They make passes hard. They play incredibly hard.”

“You get into March and you’ve got to do what you do well,” Reinhardt said. “We’ve got to stick to the script of who we are.”

The draw does pose Marquette with another unusual challenge: facing a tournament team in their home state.

“That’s just the way the NCAA Tournament goes sometimes,” Wojciechowski said. “Hopefully we have a few extra fans down there as well.”

No one looked more focused watching the selection show than Jajuan Johnson, one of three seniors looking to end their college careers on a high note.

“Nothing was better than seeing Katin, Luke (Fischer) and JJ and their reaction,” Howard said. “I know it’s been a long time coming for them, specifically JJ and Luke (who) haven’t been to a tournament since being here. They deserve to go out in a fashion like this. I’m more happy for those guys than anyone else.”

If Marquette upsets South Carolina it likely sets up a matchup between Wojciechowski and his alma mater, Duke. The No. 2 Blue Devils play No. 15 Troy.

Seven BIG EAST teams made the field as expected, including Villanova, who earned the No. 1 seed in the tournament. Providence, pushed down by Rhode Island winning the Atlantic 10 tournament today, is heading to Dayton, Ohio for a play-in game against USC.

Fellow BIG EAST foe Butler is one of the top draws for the games at the BMO Harris Bradley Center. The fourth-seeded Bulldogs will play Winthrop. The remaining three games on the Milwaukee docket are No. 5 Iowa State vs. No. 12 Nevada, No. 4 Purdue vs. No. 13 Vermont and No. 5 Minnesota vs. No. 12 Middle Tennessee.